As I type this, Ruby is sitting in the driveway with 90,998 miles on her odometer.  That means she will roll over 91,000 miles today on my way into work, so it's time for another driving update.

Ruby rolled past 90,000 miles on March 13, 2015, only 60 days ago.  That's an average of 16.67 miles/day and 508.3 miles/month, even more, however slight, than the 16.39 miles per day and exactly 500 miles per standard month of 30.5 days my wife and I drove Dez in March and April.   Put together, that means the two of us drove a total of 33.06 miles/day and 1008.3 miles/month over the last three or so months.  Those averages are nearly double the last combined reading I posted in January of 22.52 miles/day and 686.86 miles/month.  On the one hand, two long-distance trips by Dez on consecutive days totalling nearly 400 miles contributed almost half of Dez's miles.  On the other, I can't use that to obscure that my wife and I are driving more in our more car-dependent neighborhood.  How much more because of our regular driving habits instead of special trips will have to wait until a future update.

Travel for the month is estimated to be 221.1 billion vehicle miles

Here's the graph showing the driving history and new record. 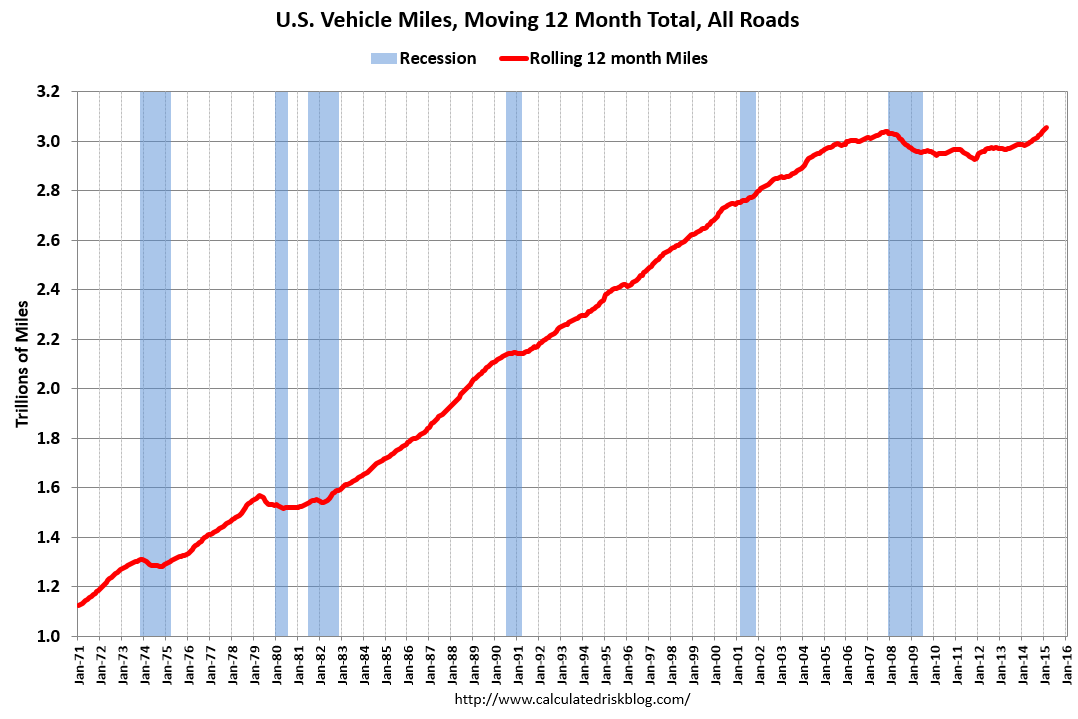 Follow over the jump for two press releases from the University of Michigan about driving and its environmental impact.

First, the lower gas prices are having a negative effect on fuel economy, as Vehicle fuel economy down in April.


ANN ARBOR—Gas mileage of new vehicles sold in the U.S. slipped last month, according to researchers at the University of Michigan Transportation Research Institute.

Average fuel economy (window-sticker values) of cars, light trucks, vans and SUVs purchased in April was 25.2 mpg, down from 25.4 mpg in March.

"This drop likely reflects the increased proportion of pickup trucks and SUVs in the sales mix," said Michael Sivak, a research professor at UMTRI.

Fuel economy is now down 0.6 mpg from the peak reached in August 2014.

Overall, fuel economy is up 5.1 mpg from October 2007, the first full month of monitoring by Sivak and colleague Brandon Schoettle.

In addition to average fuel economy, Sivak and Schoettle issued a monthly update of their national Eco-Driving Index, which estimates the average monthly emissions generated by an individual U.S. driver. The EDI takes into account both the fuel used per distance driven and the amount of driving—the latter relying on data that are published with a two-month lag.

During February, the EDI remained at 0.82 (the lower the value, the better) for the second straight month. The index currently shows emissions of greenhouse gases per driver of newly purchased vehicles are now down 18 percent, overall, since October 2007.

The press release links to two graphs.  The first shows the Eco-Driving Index over time.

The second shows gas mileage of new cars by month and model year.

The good news is that cars have never been more fuel-efficient as a fleet than now.  However, the increased driving is starting to push up emissions.  In addition, gas mileage has stopped improving.  I don't think emissions and fuel economy will improve much until gas prices go up again.

Over the past 50 years, the average annual distance driven rose by about 33 percent for men, but for women, the increase is a whopping 89 percent. In the early 1960s, the average male drove more than twice the distance of the average female; today, it's down to one-and-half times (roughly 15,000 miles for men vs. 10,000 miles for women annually)

Using data from the Federal Highway Administration, Michael Sivak, a research professor at the U-M Transportation Research Institute, examined changes in the gender demographics of U.S. drivers from 1963 to 2013.

He found that in 1963, women accounted for just under 40 percent of all drivers. Today, they constitute nearly 51 percent, and have been the majority over the past 10 years.

"Although female drivers are currently a slight majority, the likelihood of them being on the road depends not only on their relative numbers, but also on the relative amount of driving that they do," Sivak said.

A consideration of both the percentage of drivers by gender and the average annual miles driven by gender shows that about 41 percent of drivers on the road at any given time today are female, compared to roughly 24 percent in 1963.

"The observed gender trends in driver licensing will likely have major implications on the extent and nature of vehicle demand, energy consumption and road safety," Sivak said. "This is the case because, compared to males, females are more likely to purchase smaller, safer and more fuel-efficient vehicles than males. Females drive less and tend to have a lower fatality rate per distance driven."

More women driving means more efficient cars and safer drivers.  I like that.  I guess the latter is one reason why, when my wife and I travel together, she drives.  It's safer that way.
Posted by Pinku-Sensei at 12:09 AM