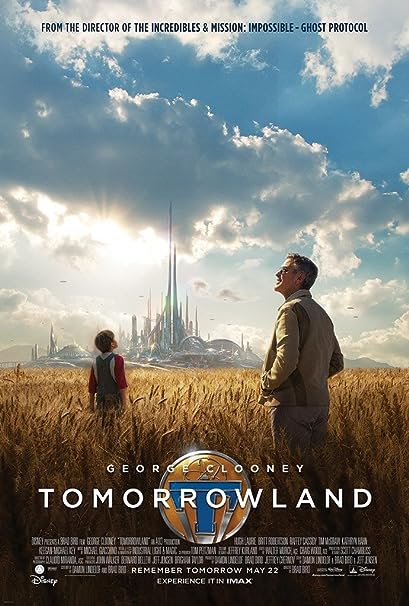 I telegraphed my intentions for today's post in yesterday's entry about roundabouts when I wrote that it would feature "Tomorrowland," which Vulture called the anti-Hunger Games, an optimistic movie about rescuing a better future that is at risk of being lost.


It emerges that Bird, in Tomorrowland, is mounting nothing less than a full-throated assault on the nihilism, dystopianism, and what might be called the fetishization of apocalypse in today’s movies, TV shows, and books — especially YA books that worm their way into the fantasies of impressionable kids. This is not, you understand, the movie’s subtext. It’s the Über-Über-text. It’s the message that’s articulated in multiple ways, as boldly as that Einstein sign, by characters bad and good, and it’s implicit in the riddle posed by Casey’s NASA dad that becomes the cornerstone of his daughter’s worldview: You have two wolves, one representing darkness and despair, the other light and hope. Which one lives? Says Casey: “The one you feed.”

My response to Bird’s anti-dystopianism is “Cool.” Because, really, how many more plague–flood–road warrior–kids-killing-kids movies do we need? It is time to feed that other wolf, if only for the sake of variety. And maybe we’ve learned too well since the days of Dr. Strangelove — which came out the same year as the New York World’s Fair — to “stop worrying and love the bomb.”

The trouble comes when Bird gets carried away with his critique of all things critical. In Tomorrowland, he suggests that it’s the people sounding the alarm — the ones constantly reminding us about climate change or the dangers of nuclear power — who are accelerating our demise, their pessimism wreaking havoc on imaginations that would otherwise be busy inventing solutions. I suspect that’s Bird’s Ayn Rand side showing its warty head, spinning another tale of extraordinary individuals kept from manifesting their creativity by repressive liberal groupthink. If Bird really believes we should shift the blame from a fossil-fuel industry bankrolling anti-science propaganda embraced by greedheads and fundamentalist wackjobs to the 98 percent of the world’s scientists saying, “If we don’t act now, and we mean now, we’re royally screwed,” he’s living in his own private Disneyland.

I hadn't known that Bird was an Objectivist.  Too bad, it makes me think less of him.  [ETA: Bird denies this, as The Dissolve points out.  Still, there is definitely a Randian flavor to his films' themes, one that the critics pick up.]  As for his film, follow over the jump for how it fared at the box office, especially compared to the films that it's critricizing.

I had earlier foreshadowed today's topic in my comment on The Era of Impact at The Archdruid Report.


As for "apocalyptic fantasies [being] common and popular in eras of pretense," the second most popular movie last weekend was "Mad Max: Fury Road."  The critics loved it for its artistic use of action, great performances, and exploration of themes as diverse as feminism, resource use, and the place of the individual in society. Yes, it's a serious film in the middle of driving across the Outback and blowing things up. Just the same, it shows how Americans (and Australians) have difficulty imagining a future where one is unable to drive, peak oil not withstanding.  I'm looking forward to seeing how it fares in competition with Disney's "Tomorrowland" this weekend.  That movie's about how the shiny retro future we were promised 50 years ago is in danger.  Disney has no idea.

Reuters presents a portion of the news about the film in "Tomorrowland" overtakes "Pitch Perfect 2" at box office.


A disappointing debut for George Clooney's "Tomorrowland" at the Memorial Day Weekend box office, bringing in just 32.2 million dollars in ticket sales so far. Though the weekend isn't over yet...


The Disney release is expected to pull in a lackluster $40.7 million for the four-day period.
...
"Tomorrowland" had been expected to generate $40 million over the three-day period and $50 million over the four-day stretch. With a $180 million price tag, Disney faces an uphill climb to profitability. Not helping matters, overseas figures were an underwhelming $26.7 million.
...
"Tomorrowland" appears to have been dinted by middling reviews and an overly secretive marketing campaign that left too many plot details under wraps...[Disney Distribution chief Dave] Hollis said consumers initially seemed to respond to marketing materials that teased the film's plot elements while keeping plot information close to the chest, but the studio would comb over exit data to see if the strategy backfired.

"We wanted it to be something that was cool and edgy and mysterious," he said.

"Pirates of the Caribbean" this movie isn't.  In contrast, "Mad Max: Fury Road" pulled in $44.4 million its first weekend, $12 million more than "Tomorrowland."  Speaking of which, how did the Australian post-apocalyptic film fare during its second weekend of release?


Warner Bros.' "Mad Max: Fury Road" had a solid hold, adding $23.8 million in its second weekend and pushing its domestic total to $87.3 million. It will do approximately $30 million worth of business over the four-day weekend. Still, with a budget of $150 million, plus promotion and marketing costs, the apocalyptic adventure has a lot of ground left to cover before it pushes into the black.

I'm rooting for "Mad Max" to earn a profit.  As for "Tomorrowland," not only did it not beat "Mad Max" in opening weekend grosses, it fell behind "Insurgent," which earned $54 million its opening weekend in March.  That's another data point in favor of my thesis that dystopia is outselling optimism right now.  Just the same, Disney is trying to spin its ugly win at the box office this weekend.


Disney distribution chief Dave Hollis predicted that the film would pick up steam as schools let out, noting it is the only PG-rated release in the month of May.

"The trade off when you're taking a bit of a chance on a new piece of [intellectual property] is that... it takes audiences a little longer to find a film," he said, adding, "This one is going to find its audience."

Good luck with that.  Otherwise, Avengers: Age of Ultron, which has earned $404.1 million at the domestic box office so far, will be subsidizing what Forbes called a "John Carter"-like performance--in other words, a big budget flop of a film that should have been made decades earlier, when it was more in tune with the zeitgeist.
Posted by Pinku-Sensei at 5:42 PM