Sanders and Kasich campaigning in Michigan on Presidents Day 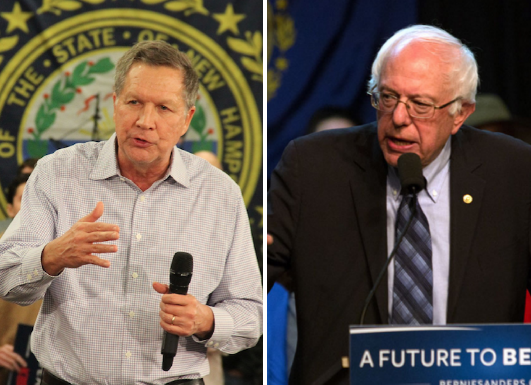 Happy Presidents Day!  In this election year, there are still eight people campaigning for presidential nominations from the two major parties.  One from each party will be visiting Michigan today, as WXYZ reports Sanders, Kasich visiting Michigan this week.


As the Detroit Free Press introduced their story:


Michigan is in for a double-barreled dose of the presidential campaign Monday when Democrat Bernie Sanders and Republican John Kasich hit the state in an attempt to woo voters.

It will be Vermont Sen. Bernie Sanders’ first trip to the state. Kasich has been a frequent visitor; this will be his ninth visit to Michigan. The state’s presidential primary election is March 8.

I'll probably write an article for Examiner.com on Sanders visit like I did for Ben Carson's.  Not only is Sanders visiting my beat, but he's in the exact same venue.  As for the outcome of this visit, Sanders needs all the help he can get in the state, as the most recent polls of the Michigan Primary show him trailing Clinton by a wide margin.  Here's to hoping he makes more stops in Michigan besides this one and the debate in Flint.

As for Kasich, he needs even more help.  He'll have to get all of Christie's and Fiorina's voters to get into double digits here in Michigan.
Posted by Pinku-Sensei at 8:53 AM