Pearl the Prius's turned over exactly 25,000 miles as I drove the final block to my house yesterday evening, so it's time for another driving update.

Pearl turned over 24,000 miles 63 days (nine weeks) ago, so I've driven her an average of 15.87 miles/day and 484.13 miles/month since then.  That's almost two miles per day and 51 miles/month less than the 17.54 miles/day and 535.09 miles/standard month I drove her between October and December.  Yay, I drove less!  That's because I was off from work for three weeks and out of town for nine days.  That's why I posted all those student sustainability videos the first week of January.  I could program a bunch of short entries to post while I was traveling and no one would be the wiser.*  Honestly, I thought that my average would be even less.  After all, I drove Ruby 15.15 miles/day and 462.1 miles/month between January and March last year, and that didn't include a three-week break!  I blame adding two additional meetings a week to my schedule for my increased driving.  I'm sure the full effect will show up in the April report.

Follow over the jump for some context from Calculated Risk and Toyota's Super Bowl commericial for the Prius.

While my driving was down from the previous reporting period, but up year-over-year, the rest of the country drove more.  Calculated Risk had the story in last month's DOT: Vehicle Miles Driven increased 4.3% year-over-year in November.

Travel for the month is estimated to be 253.2 billion vehicle miles.

Here's the graph showing the trend. 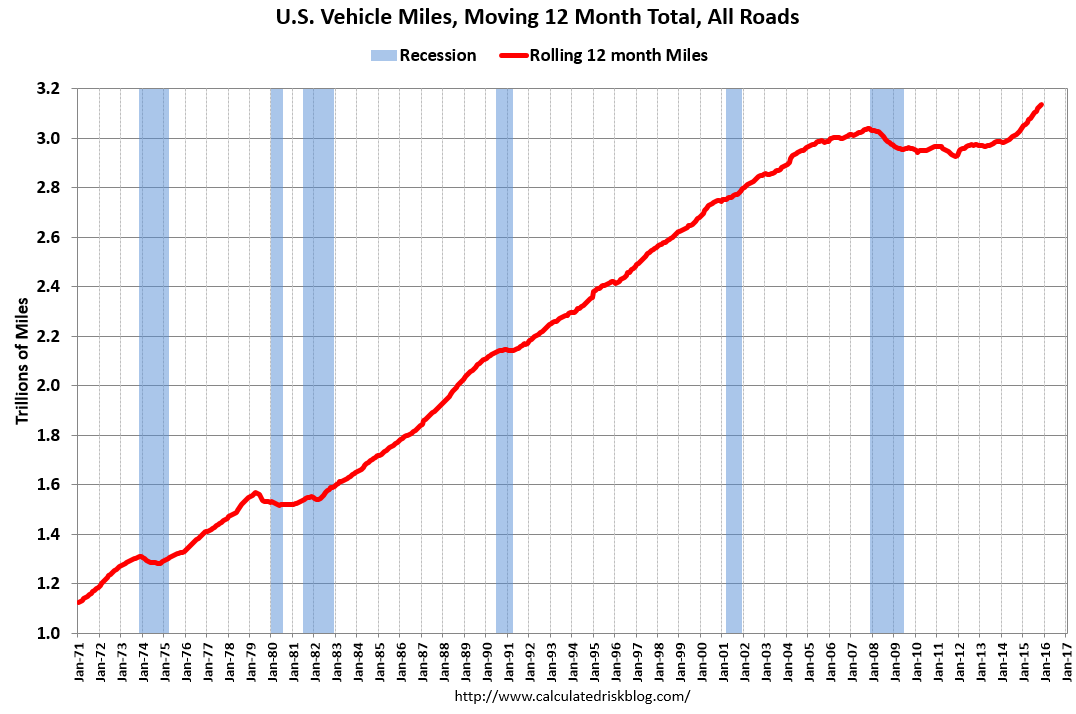 Bill McBride of Calculated Risk credits the increase to a combination of a better economy and low gas prices, especially the latter.  I'll see if my wife is reinforcing the trend or bucking it when I report on Dez later this month or sometime in March.

In the meantime, enjoy this Super Bowl commericial: The All-New 2016 Toyota Prius | The Longest Chase #GoPriusGo.

*It didn't hurt my page views.  I got 16,780 page views, the second highest in the history of the blog so far.  That reminds me that I haven't posted the monthly meta for either December or January.  Stay tuned.