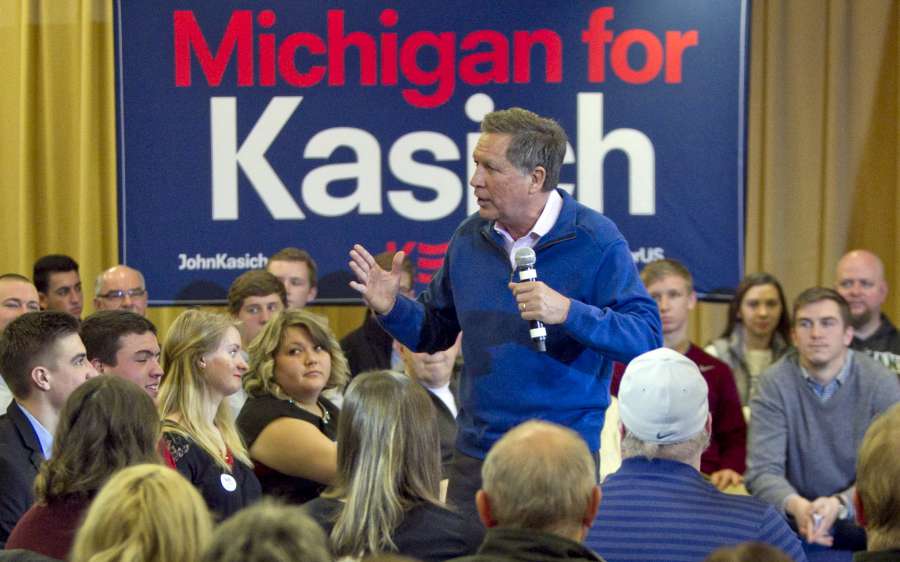 I dropped one of the shoes I dangled in Sanders and Kasich campaigning in Michigan on Presidents Day in Examiner.com article on Bernie Sanders in Ypsilanti.  Now it's time for me to let the other shoe fall.

Ohio Governor John Kasich made at least four stops over the past two days, two of which were covered by the TV stations whose YouTube feeds I monitor.  The first was in Allendale near Grand Rapids, which WOOD-TV showed in At GVSU, Kasich talks education, job growth.

Kasich talked a lot about personal responsibility and spoke directly to students about the role in leading the country in a few short years.

Kasich then stopped at Michigan State University, which I couldn't find a video of, then in Macomb County, where WXYZ caught up with him in John Kasich in Michigan.

Both accounts mentioned how important Michigan is to Kasich's chances, WOOD=TV by pointing out that he needs to do well here, WXYZ by mentioning that this is Kasich's ninth visit to the state, the most of any candidate so far.  If I were a Republican, I'd wish him good luck, as he'll need it.  Instead, I wrote the following in a comment at Booman Tribune.


Kasich has a big hill to climb here.  One of the two most recent polls had Kasich in fourth, 15% behind Rubio and Cruz, who were tied for second behind Trump at 35%.  The other poll didn't even bother asking about Kasich.

He'll have to get all of Christie's and Fiorina's voters just to get into double digits here in Michigan, enough to beat Ben Carson and Jeb Bush, but not enough to win delegates.  Kasich would have to come in first in a Congressional District to get any of those.

Would such a performance make him drop out?  Probably not.  Losing Ohio would.  That happens on March 15th, the same day as the Florida primary.  That's when I expect Kasich to exit the contest and perhaps the weaker of Jeb Bush and Marco Rubio.  I expect to be writing another farewell post or two that week.
Posted by Pinku-Sensei at 8:06 AM