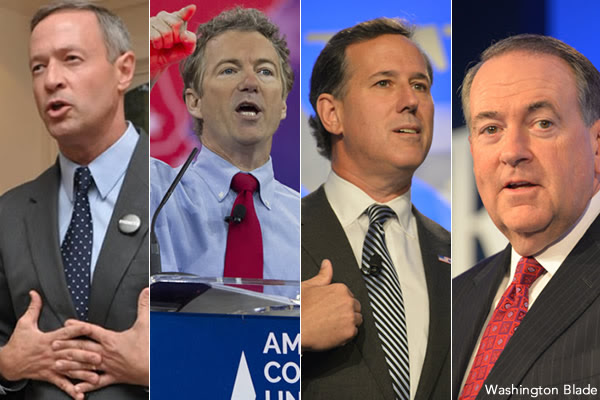 I wrote that "I'll have more about Frothy and three other candidates quitting later" in The smart money and endorsements are more for Rubio than ever.  I'm outsourcing serious commentary on this news to PBS's Washington Week, which posted Four candidates exit 2016 race, Fiorina fights to be on debate stage, Gilmore gets 4 votes in Iowa to its YouTube account as a web extra.

After disappointing finishes in the Iowa caucuses, four presidential candidates left the 2016 race including Republicans Mike Huckabee, Rick Santorum and Rand Paul and Democrat Martin O'Malley. Reid Wilson and Doyle McManus discuss why these candidates struggled to gain traction. Plus, Carly Fiorina is being left off the next Republican debate stage, despite being one of only nine remaining Republican candidates. And another Republican, Jim Gilmore, picked up only 12 votes in the Iowa caucuses.

Follow over the jump for my good-byes to each of the candidates no longer contesting their parties' nominations.

I'll repeat what I wrote in Pataki packs it in.


As for who is dropping out next, look at this photo from the second debate.

All of them are now gone except Santorum.  I've said farewell, Frothy before.  I'll be happy to say it again.

Everyone say "Farewell, Frothy," sing "Kiss Him Good-bye," and drink a Santorum Cocktail while you do.

For the next round, yell "Au Revoir, Rand" (or "Adios, Aqua Buddha") while sipping a Mint Julep.  Also, say good-bye to GOP dovishness and curse the Sith Jihad as you do so; it's their fault.

Now it's the Democrat's turn.  Hold a moment of silence for Martin O'Malley and drink either a Dogfish Head Beer or Black-eyed Susan Cocktail.

Finally, sober up on a Monica's Baptist Sangria and sing "Happy Trails" to Huckabee.  In fact, be a good sport and sing that for all four of them.  Take it away, Van Halen!