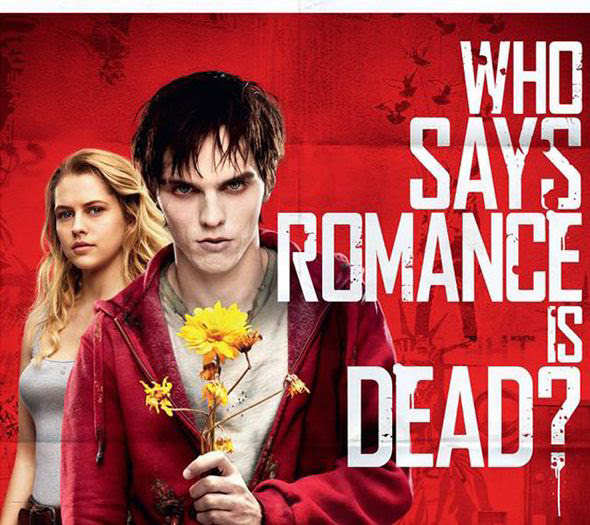 Happy Valentines Day!  I concluded Jim Gilmore gone after losing to Vermin Supreme by noting that "'The Walking Dead' returns tomorrow.  Zombies on Valentines Day!"  The movie that best combines zombies and love is "Warm Bodies," which I mentioned in Post-apocalyptic book list by noting "there are some glaring omissions, such as all three of the most recent zombie movies I’ve watched, 'World War Z,' 'Warm Bodies,' and 'I Am Legend,' although the book is on the appropriate index."  I've already written about "World War Z," so it's "Warm Bodies'" turn.*

io9 has a good review of the film that explores the romantic angle in Warm Bodies is Romeo and Juliet and Zombies, only better.


What if Juliet was a post-apocalyptic scavenger, Romeo was a zombie who ate Paris' brains, and Mercutio was a monosyllabic Rob Corddry? Zombie romcom Warm Bodies takes us to a post-apocalyptic future in which zombies stalk the Earth eating human brains—at least until one walking corpse, R, falls for Julie, one of the last living girls.

But put aside the nods to Shakespeare. Warm Bodies is a funny and soft-hearted film that plays far more on zombie- and date-movie tropes than it does on the Bard, and puts an optimistic spin on the undead apocalypse. At its basis, this is a movie about how to be alive, told through the lens of a zombie's awakening.

For spoilers, read the article at the link.  For the conclusion of the review, follow over the jump.

Skipping to the end...


Warm Bodies won't be remembered as the year's most brilliant film — but it is a sweet movie that hits every one of its marks, usually with pizzazz. First and foremost, it's a very funny movie, playing nicely on R's zombie awkwardness and the characters' self-awareness about their situations. (For example, zombies are generally referred to as "corpses" by the human population, but they know when to trot out the z-word — and other words associated with the apocalypse.) And the presence of a talking, sentient zombie lets Levine play with the "human passing for a zombie" trope in a clever way, and his spin on the romcom montages — something usually so skippable — is delightful. Plus, the one over-the-top Romeo and Juliet scene was so perfect, and hit the beats of the play in such an unexpected way, that half the screening theater was in stitches. (The other half was muttering, "Oh, I get it, R and Julie.")

The dialogue and the physical comedy are the most memorable, but Levine's message in the movie is clear: that it's more important to live than to survive. R makes a great boyfriend in part because zombies are terrible at smalltalk, and the challenges of his zombification lend an intensity to everything he does and every thought he shares with Julie. It's R's struggle to live despite being dead (and Julie's admiration of that quest) that triggers a small change inside him with far-reaching consequences for not only zombie-kind, but humanity as well.

Ultimately, Levine hopes that, through Warm Bodies, a zombie will remind us all how to live. R may not quite hit such depths, but he's one zombie who is great fun to spend a date night with, and who's easy to fall for — brain eating and all.

For fans of the zombie apocalypse, it's the perfect date movie.

Of course, this being one of my entertainment entries, I'm going to put one of my unique spins on it.  The most distinctive is to find a marching band or a drum corps performance that complements the theme.  It turns out I have just the video for this situation.  In the spirit of Marching bands of the zombie apocalypse and Marching bands of the zombie apocalypse, the sequel, I present Fresno State Bulldog Marching Band performing "Romeo & Juliet- The Untold Zombie Apocalypse."


Once again, Happy Valentines Day!  Enjoy the return of "The Walking Dead" and "Talking Dead" tonight!

*One of these days, I'll have to write about "I am Legend" and its various movie incarnations.  That might take another two years.
Posted by Pinku-Sensei at 1:51 AM