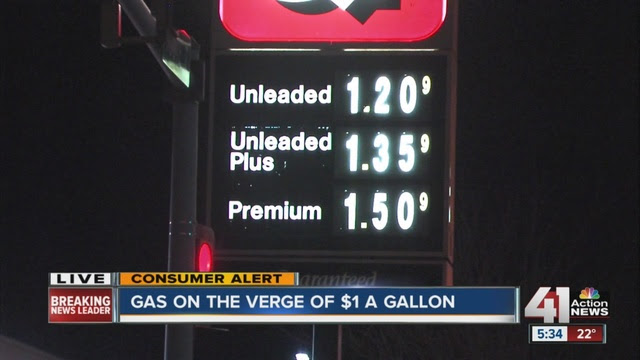 I might have been too confident about the level of the floor under gas prices at the end of Limbo bar now at $1.45.


As for how low gas might go, I think the bottom is $1.39.  There's not much lower gas can go and not much time left before the seasonal gas price rise begins.  I expect that should begin after Valentine's Day.

Yesterday, the corner station had already dropped its price to $1.42, while a station a mile away had lowered its cash price to $1.39, $1.29 with a car wash.  Normally, I'd call a bottom, but it looks like I might have to wait, as WOOD-TV reported two days ago MI gas prices hit lowest level since 2003.

The fall is continuing as I type this.  GasBuddy shows the same station that I topped off Pearl has already dropped its price to $1.39 and stations within a mile are selling regular for $1.33.  It could go lower, as the Detroit average is now $1.46 and falling; at least one station in the metro area has a posted price for regular of $1.06.  Wow, I never thought I'd see prices that low again!

Crude futures are not at record lows, but they are close, as Oil-Price.Net lists yesterday's closes for WTI at $27.94 and Brent at $30.32.  Even more importantly for retail gas prices, RBOB is at $0.90, nearly a dime lower than it was on Friday.  Those low wholesale prices will allow the price at the pump to continue falling for at least a week.

As for what the rest of the year holds, the Chicago Sun-Times reports Energy agency says gasoline will average under $2 in 2016.


For the first time since 2004, U.S. drivers are expected to pay an average of less than $2 a gallon for gasoline, the government said Tuesday.

They can thank the huge glut of oil around the globe.

The U.S. Energy Information Administration said in its monthly short-term energy outlook that regular gasoline will average $1.98 a gallon nationwide in 2016. The last time oil averaged less than $2 for a full year was 2004, which was also the last time gasoline at stations in some states fell below $1 a gallon.

That's good news for consumers.  What about oil prices?


“If these numbers prove to be accurate, and with the market already awash in oil, it is very hard to see how oil prices can rise significantly in the short term,” the IEA said.

Fueled by low prices, and an improving job market, consumption of gasoline in the U.S. rose by 2.6 percent last year to 9.2 million barrels a day, the highest level since 2007, the government said. The EIA estimates that the average U.S. household saved $660 on gasoline in 2015, a year when the price of a gallon averaged $2.43.

I may have to delay my forecast of a recession arriving until later in 2017 than I expected--that, or the cause won't be an oil price shock.  Stay tuned.
Posted by Pinku-Sensei at 10:01 AM