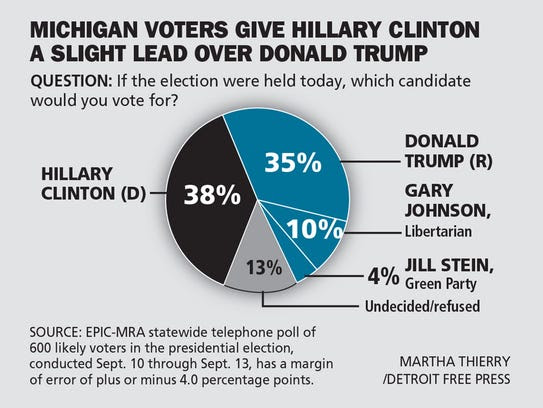 When I last reported on the state of the presidential contest in Michigan, Clinton had leads of 17% and 15%.  That was at the start of July.  The situation has changed dramatically since then, as WXYZ reports in EXCLUSIVE POLL: Presidential race between Clinton & Trump too close to call in Michigan.

The race for U.S. President has narrowed considerably in Michigan and is now too close to call!

Also, where Clinton led among black voters, 85%-2% over Trump in August, that is now 74%-2%, with the poll showing some support migrating to Johnson and Stein and the undecided number growing from 10% to 14%.

And in the most populous part of Michigan — Wayne, Oakland and Macomb counties — where Clinton held a 53%-27% edge over Trump in August, she now holds a 47%-32% margin. Undecideds remained at 11%.

Clinton's support among people from union households fell from 49% to 41%, where Trump’s rose from 29% to 37% — though she appeared to continue to hold a wide margin among union members themselves. The UAW, Teamsters, AFL-CIO and others have endorsed Clinton.

On the one hand, EEP!  FiveThirtyEight now gives Clinton 71.4% chance of winning the state, down from 93% in August.  On the other, it's now time to do something about the situation.  Fortunately, there is a campaign field office just a mile away.  The manager there has been asking me to phone bank and canvass since it opened.  When Clinton had a more than ten point lead, I didn't think she needed my help.  Now, she does.  Time to start volunteering!
Posted by Pinku-Sensei at 10:12 AM