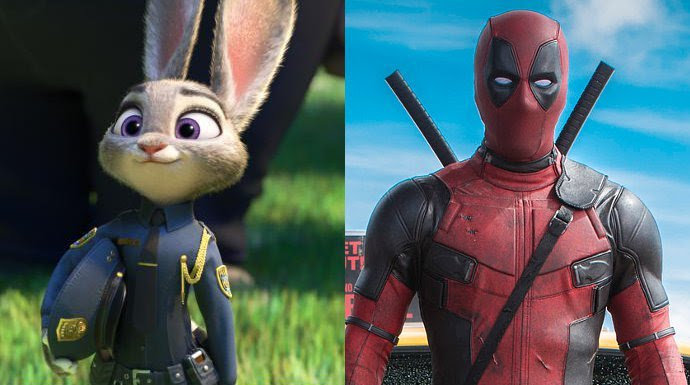 It took me a week to write about Deadpool's second week on top of the box office, so it should come as no surprise that it took me a week to get to "Zootopia" taking over the top spot.  Wochit reported on last week's news in "Deadpool" Box Office Reign Ends As "Zootopia" Takes First Place.

All good things must come to an end - even for the wisecracking merc with a mouth - as "Deadpool's" three-week reign atop the box office has come to an end. Several new releases helped push the R-rated Marvel blockbuster out of the top spot, which went to the Disney-animated "Zootopia," whose first week total was over $73 million. In second place, "London Has Fallen," which stars Gerard Butler, Aaron Eckhart and Morgan Freeman, earned just under $22 million. In its fourth weekend in theaters, "Deadpool" fell to third place with $16.4 million, bringing its domestic total to over $311 million. Rounding out the top four was the Tina Fey comedy "Whiskey Tango Foxtrot," which debuted with just over $7.5 million.

Not only was "Zootopia" the top film last week (and this week--see below), but it set a record for a Disney animated film.  Wochit has that news as well in 'Zootopia' Stampedes Box Office, Bigger Than 'Frozen'.


Deadpool's" three-week reign atop the box office has ended thanks to a handful of new openers, including "Zootopia" and "London Has Fallen." The top spot went to Disney's "Zootopia" which staged a box office stampede in its first weekend in North American theaters with $73.7 million. It's the fourth highest March opening ever and a best for a Disney Animation three-day debut. The studio's previous record-holder, "Frozen," grossed $67.4 million over three days in its Thanksgiving opening. Critics and audiences love the film, which features the voices of Jason Bateman and Ginnifer Goodwin.

The write-up ignored what Shakira said about the film's social message.  For that, I recommend reading Vox's Zootopia review: This is the best animated kids movie about prejudice and police brutality ever and Zootopia wants to teach kids about prejudice. Is it accidentally sending the wrong message?  If Vox's prediction that "Zootopia" is a favorite for Best Animated Feature comes true, I'll be sure to write more about it then.  For now, follow over the jump to read about how "Zootopia" and other films did this week.


This is the weekend box office report for all “old” movies.

Walt Disney’s Zootopia topped the weekend box office for a second weekend in a row, earning a whopping $50 million in its second frame and $142.6m in ten days. The film dropped just 33% in weekend two, a drop on par with Wreck-It Ralph which earned $49m in its first weekend back in November 2012. In terms of big-scale February/March animated features, The Lorax and Monsters vs. Aliens dropped 45% in their respective second weekends while Ice Age dropped 35% in its second frame back in March of 2002. The LEGO Movie had a holiday bump in weekend two and thus its drop was just 27%. That film’s ten-day total was $130m while its eleven-day total was $142m.

For the record, The LEGO Movie ended up with $257 million domestic and if Zootopia plays with similar legs from here-on-out it will end its run with around $280m domestic. If by some miracle it is even leggier than that, we may be heading into summer with three $300m+ domestic earners alongside Deadpool and (presumably) Batman v Superman: Dawn of Justice. That’s pie-in-the-sky thinking of course, but even a performance like Wreck-It Ralph and Big Hero 6 from this point gives Zootopia $288m domestic by the time it’s done. And the film is clearly becoming the water cooler movie of the moment, to the point where the strong hold indicates that adults are checking it out absent child-size chaperones. However unfortunate, its topicality is only going to make it a bigger deal in the weeks ahead.

Even this review points out the social relevance of the film.

What about the number two film?  It's also a speculative fiction film, the horror/action flick "10 Cloverfield Lane."  A different Forbes article reviewed it and its box office in Weekend Box Office: '10 Cloverfield Lane' Scares Up $25M While 'Brothers Grimsby' Flops Hard.


Back in 1982, Halloween III: Season of the Witch was released in theaters to relatively indifferent audiences and/or annoyed fans. Despite the title, the film had little to do with Michael Myers, Laurie Strode, or Dr. Loomis. The original intent, once upon a time, was to make a series of stand-alone Halloween films that merely used to the title to specify a specific time in which the story took place. But Season of the Witch was considered a failure and earned just $14 million at the domestic box office. Six years later, we got Halloween IV: The Return of Michael Myers which operated as a direct sequel to Halloween II on the ten-year anniversary of the first film. And history continued as we know it. Until now…

But this weekend, Bad Robot and friends tried a similar scheme, with a bit more success. They took a stand-alone script called The Cellar, gave it a slight polish, and slapped a new title, 10 Cloverfield Lane, on the marketing materials so as to tease audiences with the idea that the film is something of a theoretical sequel to Cloverfield. Without spoiling what connection the film does or does not have to the 2008 found-footage monster movie hit (spoiler: the John “Cloverfield Monster” Harrison is Rey’s father and John Harrison is not quite his real name), we may well have seen the birth of a genuine honest-to-goodness theatrical horror anthology franchise. Suck it Troll 2, get lost V/H/S, and so long M. Night Shyamalan Chronicles, because 10 Cloverfield Lane just snagged a $25.2 million opening weekend.

Oh, yeah, and "Deadpool" is still a strong third, so speculative fiction--fantasy, horror, and science fiction (sort of) earned win, place, and show this weekend. As for the rest of the weekend box office, read the chart below.

I wouldn't be surprised of "Gods of Egypt" gets nominated for a half-dozen Razzies next year; it looks like their kind of film.  As for the fourth place film, "London is Fallen," it got a drink recipe from Tipsy Bartender, The Motorcade Shots.

We made a flaming line of bomb style shots based on the new movie "London Has Fallen."
...
THE MOTORCADE SHOTS
Shots:
1/2 oz (15ml) Peach Schnapps
1/2 oz (15ml) Creme de Banana
Splash of Everclear

About this movie, Forbes wrote:

I'll wait until it comes to cable.

Finally, Forbes describes what to expect this coming weekend.


Next weekend sees merely Lions Gate Entertainment’s The Divergent Series: Allegiant. That will be a relatively big debut ($40-$50 million, although a Voyage of the Dawn Treader situation is somewhat possible), but that’s a strictly-for-the-fans affair at this juncture. For general moviegoers, Zootopia will remain the big cinematic offering until justice dawns on the evening of the 24th and then after that until The Jungle Book on April 15th.
...
And that’s a wrap. Join me next weekend for The Divergent Series: Allegiant (which earned $26.7 million overseas after slowly opening over 26 territories last week) and Miracles From Heaven.

Given that I'm a big fan of the Divergent series, I expect that to be one of the subjects of next week's Entertainment Sunday entry.
Posted by Pinku-Sensei at 2:54 PM