, I told my readers to expect a driving update today.  That's because Pearl turned over 31,000 miles yesterday.  She last rolled over her odometer on November 8, 2016, 59 days ago.  That translates to an average of 16.95 miles per day or 516.95 miles per standard month.  While that seemed like a lot to me at first, it was still about a third less than the 24.39 miles/day and 743.90 miles/standard month I drove at the last update.  The election being over, meeting frequency decreasing, and school being out all had the effect I expected during the last update of driving less.  In fact, according to the statistics I computed in Double driving update for September, I drove less than I averaged the first year I owned Pearl, 17.41 miles per day and 530.9 miles per standard month.

As for Dez, my wife's car has traveled just over 300 miles since the last update.  I could post two more updates for Pearl before I write one for Dez.

Consequently, my wife and I contributed a lot less to the increased miles driven by Americans than we did the last update.  Here is the latest from the U.S. Department of Transportation via Doug Short.

Here is the graph showing the 12-month moving average. 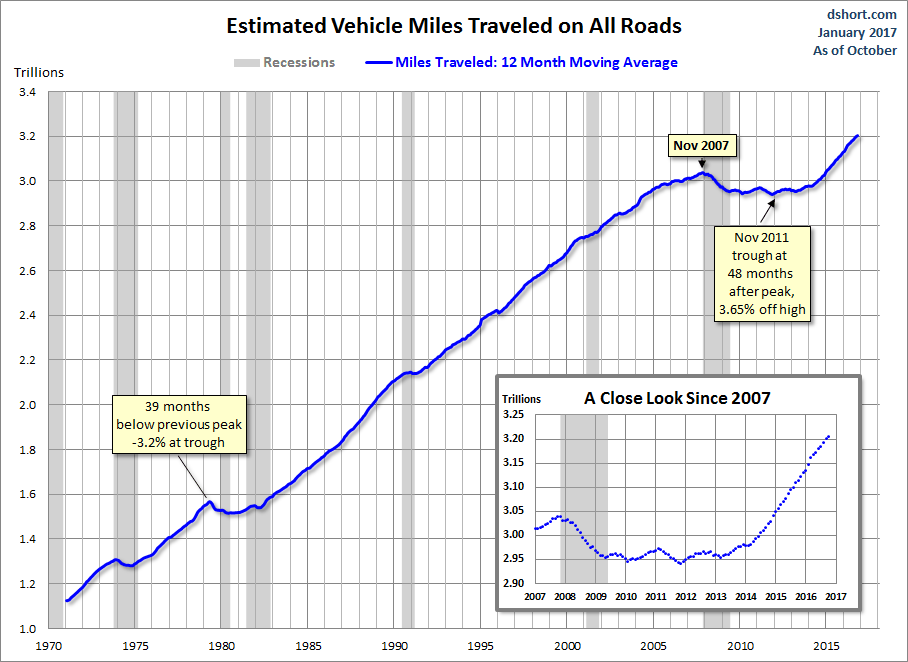 As for what the future holds, the college will be back in session next week so my driving will increase to slightly more than the average for the first year I owned Pearl.

Stay tuned for the Sunday entertainment feature.
Posted by Pinku-Sensei at 11:39 AM