Hollywood gets political at the Golden Globes 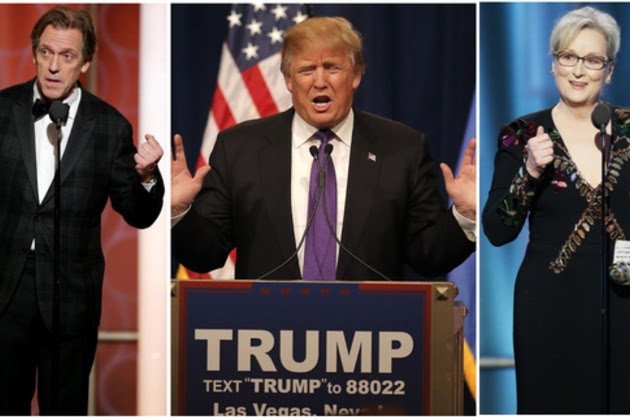 After reporting on 'Zootopia' being the only speculative fiction winner at the Golden Globes, I noted "there were a lot of political jokes and remarks last night."  NBC News included many of them in Meryl Streep, Jimmy Fallon, Hugh Laurie Get Political At Golden Globes.

Donald Trump was a target at this year’s Golden Globes, with a handful of actors voicing their opposition to his presidency.

That's not all.  Fallon also joked that “What would it be like if King Joffrey had lived?  Well, in 12 days we’re going to find out.”  He isn't the first to make that comparison.  I quoted a YouTube user saying "Donald Trump is Joffrey all grown up."  My response was "I can see the resemblance."

NBC News left out the most salient criticism of Trump in their montage, but the Wall Street Journal featured it in Meryl Streep Criticizes Trump at Golden Globes.

Meryl Streep railed against Donald Trump as she accepted a lifetime achievement award at the Golden Globes. The President-elect later hit back on Twitter against the actress.

Trump may have hated the attack, but many of those in the entertainment industry appreciated it.  MSNBC captured a representative response in Barbra Streisand Sounds Off On Donald Trump.

When I wrote that this blog would "resume its regular programming, which will likely be about entertainment awards shows and coping with the election of Donald Trump," I had no idea I would do both in one post!
Posted by Pinku-Sensei at 8:23 AM