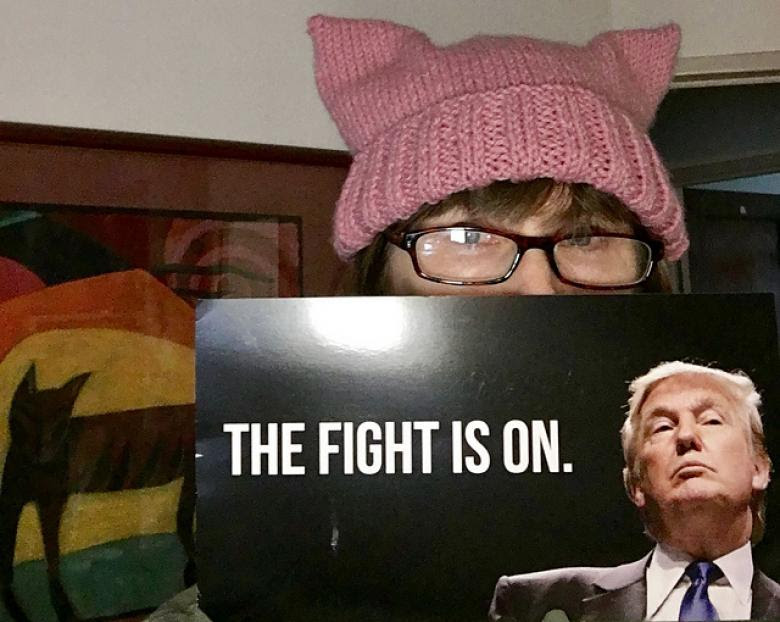 Yesterday, I staged my own little protest on this blog with Counterprogramming for The Resistance.  Today is a much bigger demonstration, the Women's March on Washington.  Euronews has a light-hearted report on the event in Best pussyhat forward as America's Women prepare to defy Trump.

It might become the biggest protest event in US history. This Saturday, tens of thousands of people or more are supposed to take to the streets of Washington DC to join the "Women's march", an anti-Trump protest event supporting solidarity for minorities.

The pussyhats will show up in other reports, but not the next one from PBS NewsHour, Women’s March leaders aim for ‘solidarity against misogyny’.

On Saturday, another crowd will gather on the National Mall -- not to celebrate, but to advocate. William Brangham talks with Bob Bland and Carmen Perez, co-chairs of the Women's March On Washington, about the organization’s mission to protect women’s rights, creating a safe space for difficult conversations on sensitive issues and remembering that “we’re all people first.”

Women and men from Michigan are coming to the event.  WOOD-TV of Grand Rapids reported Local protesters head to Washington for women’s march.  Pussyhats make an appearance.

A march likely to have historic turnout will ask President Donald Trump to respect women’s rights as he begins his presidency.


Note the mention of Michigan locations mentioned in both of the last two videos.  My wife and I won't be traveling to Washington, but we do plan to attend one of the Michigan events, most likely the one in Ann Arbor.  If so, I'll report on it next week.

In the meantime, stay tuned for the Sunday entertainment entry.  I plan on writing on the results of the People's Choice Awards.
Posted by Pinku-Sensei at 12:00 AM