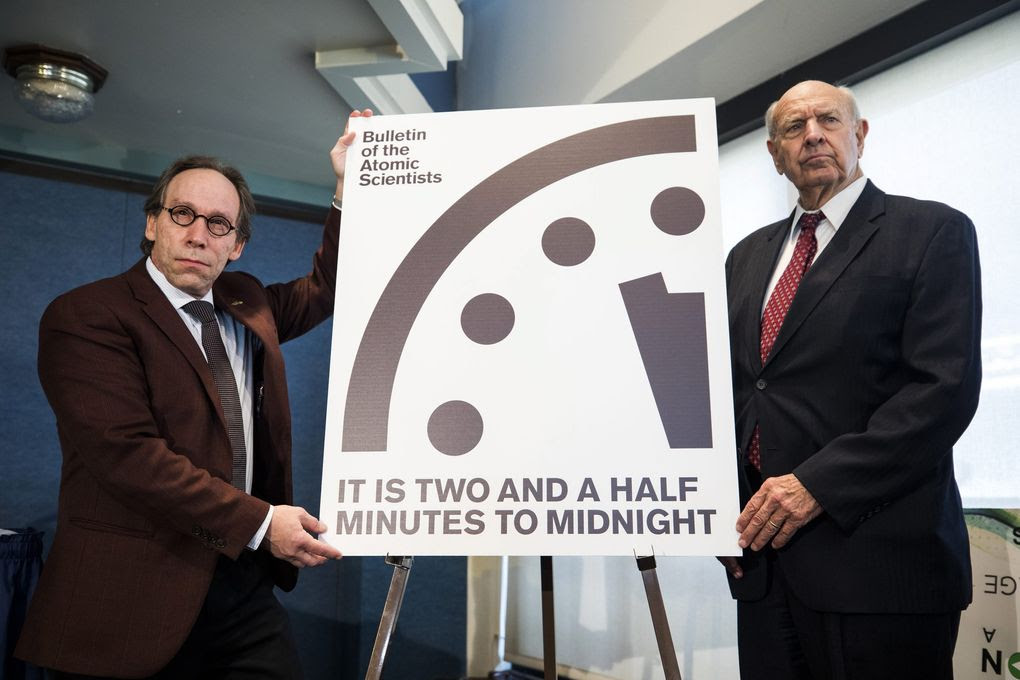 I seem to be alternating between hope and doom this week.  Hope appeared in the form of the actions of The Resistance in Marching in Ann Arbor plus other women's marches in Michigan and Resist!  Greenpeace unfurls a banner of encouragement, while doom raised its ugly head in Yesterday was a good day for pipelines, a bad one for environmentalists.  Today, it's not just doom, but DOOM, as Wochit News reports Doomsday Clock Now 30 seconds Closer To The Apocalypse.

Catastrophe is now 30 seconds closer than it was last week, according to the editors for the Bulletin of the Atomic Scientists. The Bulletin has published a graphic of the Clock every year since 1947, when the threat of nuclear war was the biggest threat to humanity. The Bulletin cited several reasons for the decision to change the clock, including a a rise in strident nationalism worldwide in 2016, and Donald Trump's entire presidential campaign, where he made disturbing comments about the use and proliferation of nuclear weapons, while expressing disbelief in the overwhelming scientific consensus on climate change.

USA Today quoted the Atomic Scientists on their reasons for the change, and all of them referenced Trump.

While many threats played into the decision to move the clock 30 seconds forward from where it was in 2016, one person in particular prompted the scientists to act.
...
“This year’s Clock deliberations felt more urgent than usual…as trusted sources of information came under attack, fake news was on the rise, and words were used by a President-elect of the United States in cavalier and often reckless ways to address the twin threats of nuclear weapons and climate change,” Rachel Bronson, the executive director and publisher of Bulletin of the Atomic Scientists, said in a statement.
...
"Never before has the Bulletin decided to advance the clock largely because of the statements of a single person. But when that person is the new president of the United States, his words matter," David Titley and Lawrence M. Krauss of the Bulletin wrote in an New York Times op-ed.
...
“Current political situation in the U.S. is of particular concern,” Titley of the Bulletin Science and Security Board said. “The Trump administration needs to state clearly, unequivocally it accepts climate change caused by human activity…There are no alternative facts here.”

I've covered the Doomsday Clock twice before and neither time did the actions of a single person get mentioned, let alone play such a prominent role in the decision to move the clock.  That's probably why it was advanced 30 seconds instead of some multiple of a whole minute, which had also never happened before.

Trump has become a unique threat not just to American democracy, but to civilization.  Because of him, trying to stave off collapse and decline means becoming part of The Resistance, so this is now a Resistance blog as well as a Doomer blog.  As Keith Olbermann says, "Resist! Peace."
Posted by Pinku-Sensei at 11:33 AM