Those all happened on Saturday.  Michigan was a little slower to get organized, but Sunday saw protests across the state.  MLive showed the largest in Thousands fill Detroit Metro Airport in protest.

Thousands gathered Sunday afternoon, Jan. 29 at Detroit Metropolitan Airport in one of at least four protests statewide to President Donald Trump's executive order to ban entry into the U.S. of people from seven Muslim-majority countries and the entry of refugees.

WXYZ captured even more images showing the size of the protest at the beginning and near the end of Delta planes taking off after system outage.


It was the largest protest, but far from the only one.  MLive listed five more.

There were at least four protests in the Detroit area Sunday in response to the controversial executive order, one in Hamtramck, which has one of the highest concentrations of Muslim residents in Michigan, including many who came from Yemen, one of the countries Trump named in the ban; another at Dearborn's Henry Ford Centennial Library; the largest took place at Detroit Metro Airport's international terminal; and a sit-in was planned at Wayne State University in Detroit.

Hundreds of protesters gathered outside Ford Airport to show their disapproval of President Trump’s ban on travel from several nations.

"This is where the march became a movement," said Phoebe Hopps, one of the Michigan coordinators for the Women's March on Washington, who also organized Sunday's airport protest. "Rooted in the promise of America’s call for huddled masses yearning to breathe free, we believe in immigrant and refugee rights regardless of status or country of origin. We believe migration is a human right and that no human being is illegal. We stand with our Muslim sisters and brothers, and reject the path of xenophobia and extreme vetting.”

Hopps, who lives in Traverse City, scrambled Saturday evening for a permit from the Wayne County Airport Authority to stage the protest. 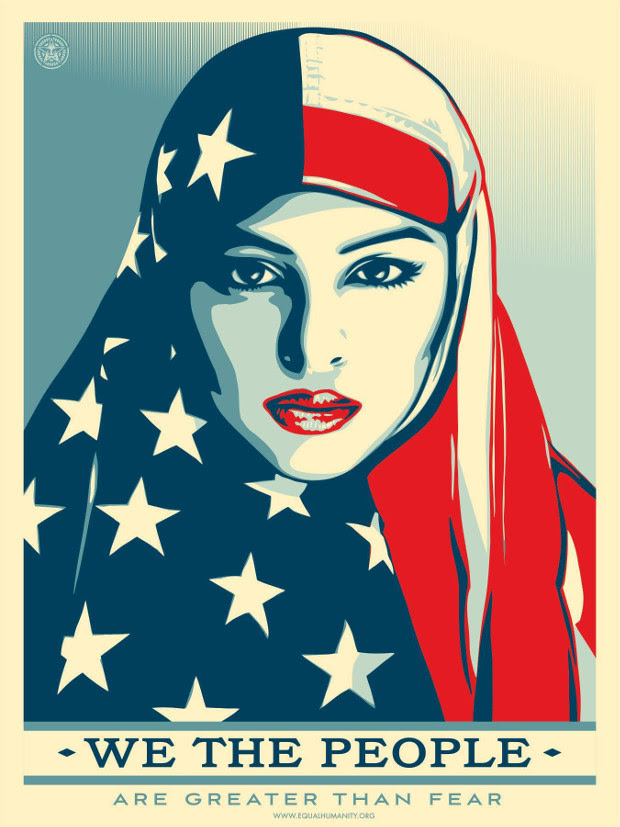 Now go back to the videos and look for the poster along with hand-made imitations.  I suspect people will see a lot of this image in the near future.  In the meantime, "Resist.  Peace."
Posted by Pinku-Sensei at 10:44 AM