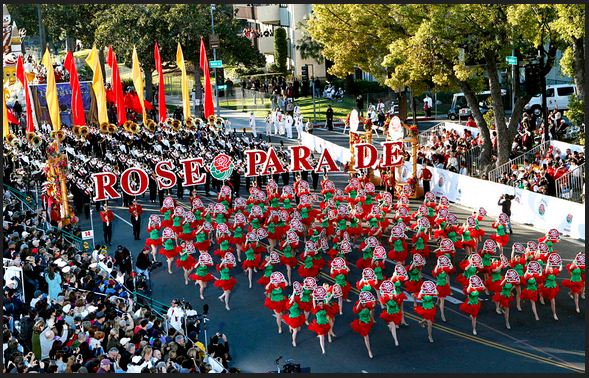 The New Year's celebration continues, as the Rose Parade is being held today instead of yesterday.  Why?  "Never on a Sunday," that's why!

Last year, the theme of my entry was Michigan marching bands.  There are no Michigan bands in the Rose Parade this year, just like there were none in the Macy's Parade last year, so I'll have to choose another theme.  But first, the Rose Parade 2017 Marching Bands.

In addition to the above, the marching bands of the universities participating in the Rose Bowl, the University of Southern California Trojans and the Pennsylvania State University Nittany Lions, will march down Colorado Boulevard.  However, this entry is not about either of them (I don't like either college and will root for PSU only because I dislike USC more).  Instead, it's about four competitive units, Arcadia High School, Broken Arrow High School, Pride of Lawrence Township, and the Santa Clara Vanguard.  Follow over the jump for videos of each of them.

First, the Arcadia High School Marching Apaches!  Music213 has videos of them at the band's last Rose Bowl appearance in 2012, beginning with the performance of their 2011 field show at Bandfest.

Next, Arcadia HS Apache Marching Band at the 2012 Pasadena Rose Parade , including their pre-parade preparations.

Their director from five years ago may have retired, but I've watched videos of their performances this year.  They're just as good as ever.

The next band, the Pride of Broken Arrow, is also a veteran of the Rose Parade, having appeared in 2009 and 2013.  They are also a three time Bands of America Grand National Champion, hence my interest.  Here they are performing their 2012 field show at Bandfest.

The Pride of Broken Arrow High School Marching Band performing their field show entitled "Surrender to Hope" at the 33rd Annual Pasadena Tournament of Roses Bandfest on Sunday, December 30th 2012. This fantastic group is a 19-time Oklahoma State Marching Band Champion and the 2006 & 2011 Bands of America National Grand Champion. The Pride of Broken Arrow High School is making their second appearance in the Tournament of Roses Parade, having last appeared in 2009.

The band became Grand National Champions again in 2015.  That same link alerted me to the history of the Marching Pride of Lawrence Township, which were BOA Grand National Champions twice while competing as Lawrence Central.  As far as I can tell, the band has never marched in the Rose Parade.  Here is WTHR's report on the band landing a spot in 2017 Tournament of Roses Parade.


BOA (as Music For All) has a 2014 FINALIST FEATURE: Lawrence Township, IN showing the band at the championships two years ago.

Last but far from least is the marching unit in which I'm most interested, the Santa Clara Vanguard, which is celebrating its 50th anniversary this year.  SCV marched in the Rose Parade once before in 2004, but I can't find any videos of it on YouTube (or anywhere else, for that matter), so the following video of this year's show, "A Force of Nature," will have to do.

In case my readers are wondering, this is one of the three corps I noted on Festivus that used fake trees in its show last year.  Expect to see the video again on May Day.  As I wrote, I'm an environmentalist, I recycle.