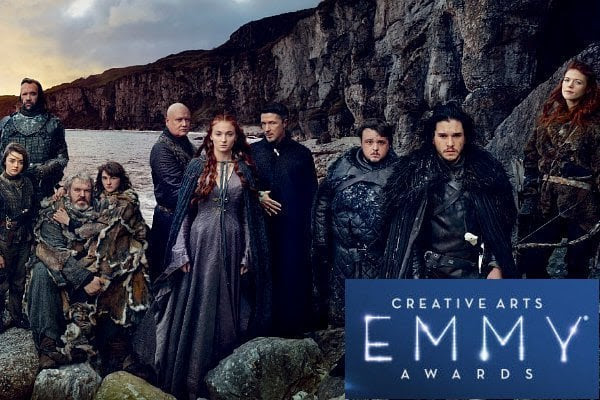 As I feared, "Game of Thrones" managed to shut out the other series I was rooting for, "The Walking Dead," "Penny Dreadful," and "Gotham."  None of them won a single award.  However, it still didn't beat all of the speculative fiction entries nominated against it.  The one I found most surprising was "Man in the High Castle" beating "Game of Thrones" for Outstanding Cinematography – Single Camera.  The Amazon series about the Hugo Award winner also won Outstanding Title Design, defeating "Marvel's Jessica Jones," "Narcos," "The Night Manager," and "Vinyl."  "Jessica Jones" still got recognized, but that's a story for over the jump.  Finally, "Black Sails," which barely qualifies as speculative fiction, won Outstanding Sound Editing For A Series.  That's small consolation for being cancelled.

I did say that "Marvel's Jessica Jones" got an award.  Wochit has the story in 'Jessica Jones' Wins Creative Arts Emmy.

Marvel's hit Netflix series 'Jessica Jones' is now the proud recipient of an Emmy Award. Last night, the show was awarded a Primetime Creative Arts Emmy Awards, after already receiving a Peabody Award and a Hugo Award. Sean Callery was given the award for Outstanding Main Title Theme Music, beating out fellow nominees Narcos, Crazy Ex-Girlfriend, The Whispers, Sense8, and The Night Manager. 'Jessica Jones' has been renewed for a second season on Netflix.

Speaking of music, here are the other winners in the music categories.

"'Til it Happens to You," The Hunting Ground (CNN)

I'm glad the Lady Gaga song won an Emmy after rooting for it to win an Oscar then losing to "Writing's on the Wall" from "Spectre."  I was not impressed with that song and I'm a Bond fan.  On the other hand, I was still hoping "Penny Dreadful" would win its music category.  Still, losing to "Mr. Robot" is nothing to be ashamed of.

I'll be back with the winners of the Prime Time Emmy Awards later this week.  In the meantime, expect Talk Like a Pirate Day for tomorrow, two or three entries about the News and Documentary Emmy Awards, and the Autumnal Equinox.  Yes, I have my week planned out already.
Posted by Pinku-Sensei at 12:06 PM