'Mrs. America' and 'The Plot Against America' lead limited series nominees at the 2021 Critics Choice Awards 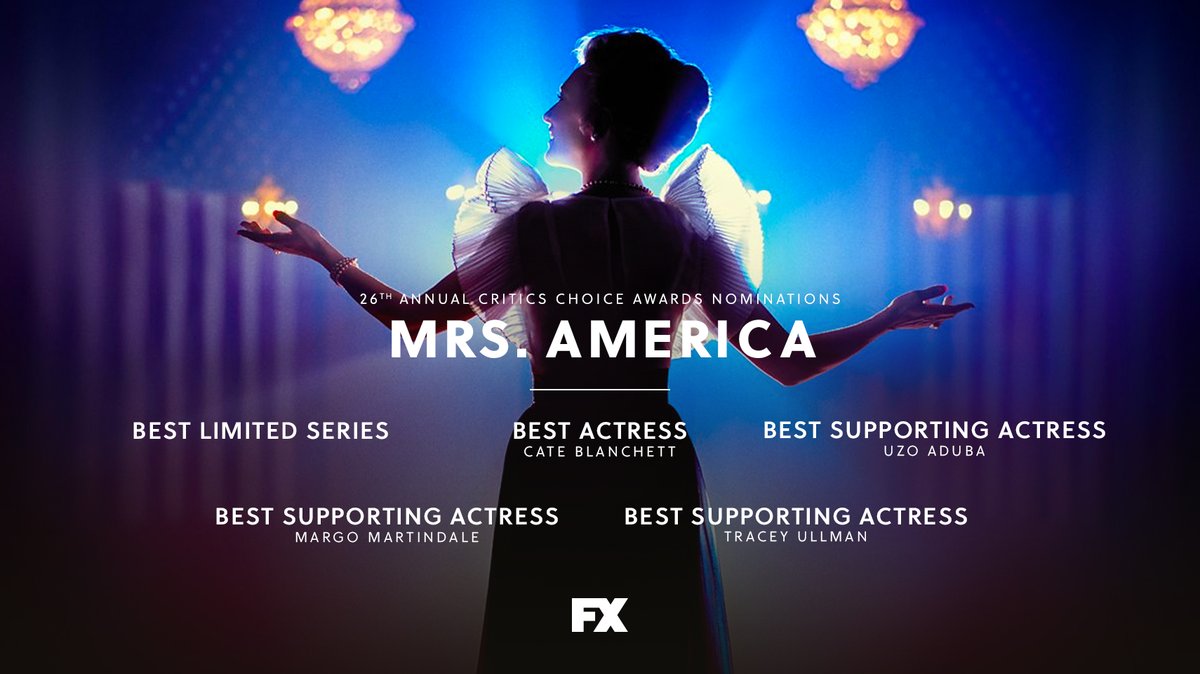 "Stay tuned for the limited series and television movies nominees." That's what I told my readers at the end of 'Schitt's Creek' and 'What We Do in the Shadows' — funny and fantastic local politics in most nominated comedy series at the Critics Choice Awards, so I'm following through. It's time to recycle the relevant paragraph from the 26th annual Critics Choice Awards press release, which I first posted in 'Ozark' and 'The Crown' lead drama series nominees about politics and government at the 2021 Critics Choice Awards.

“Mrs. America” and “The Plot Against America” earned more nominations than other any limited series or television movie at these awards, so I'm focusing on them along with the show most likely to upset them, "Queen's Gambit." 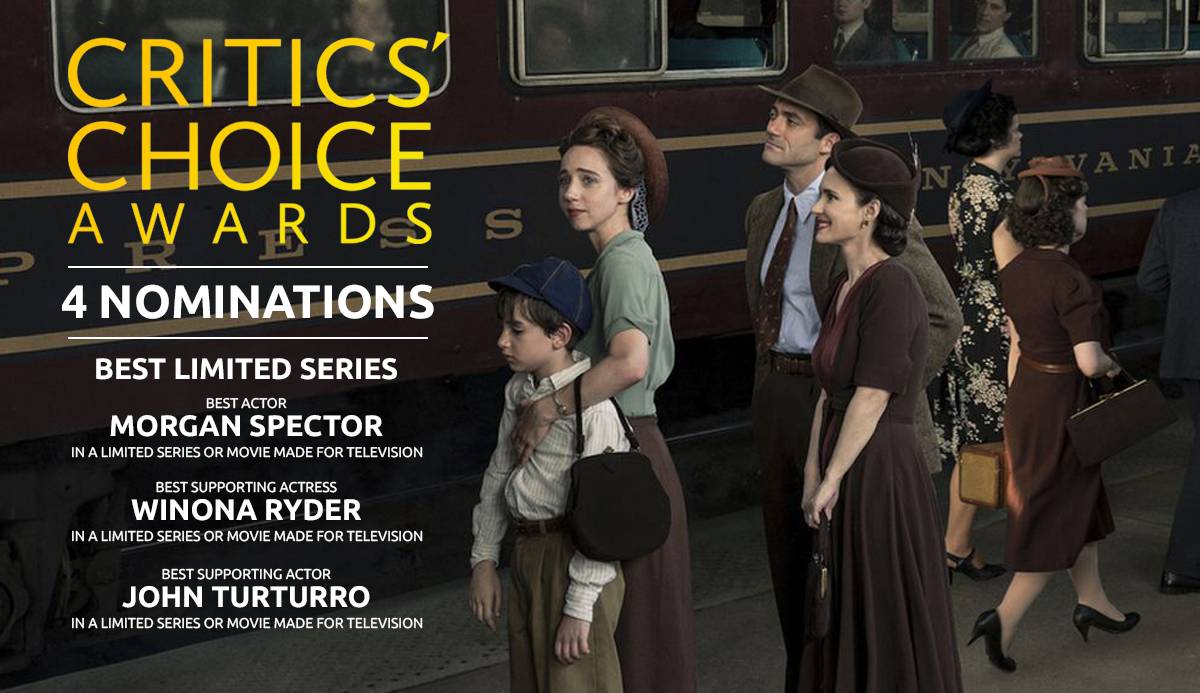 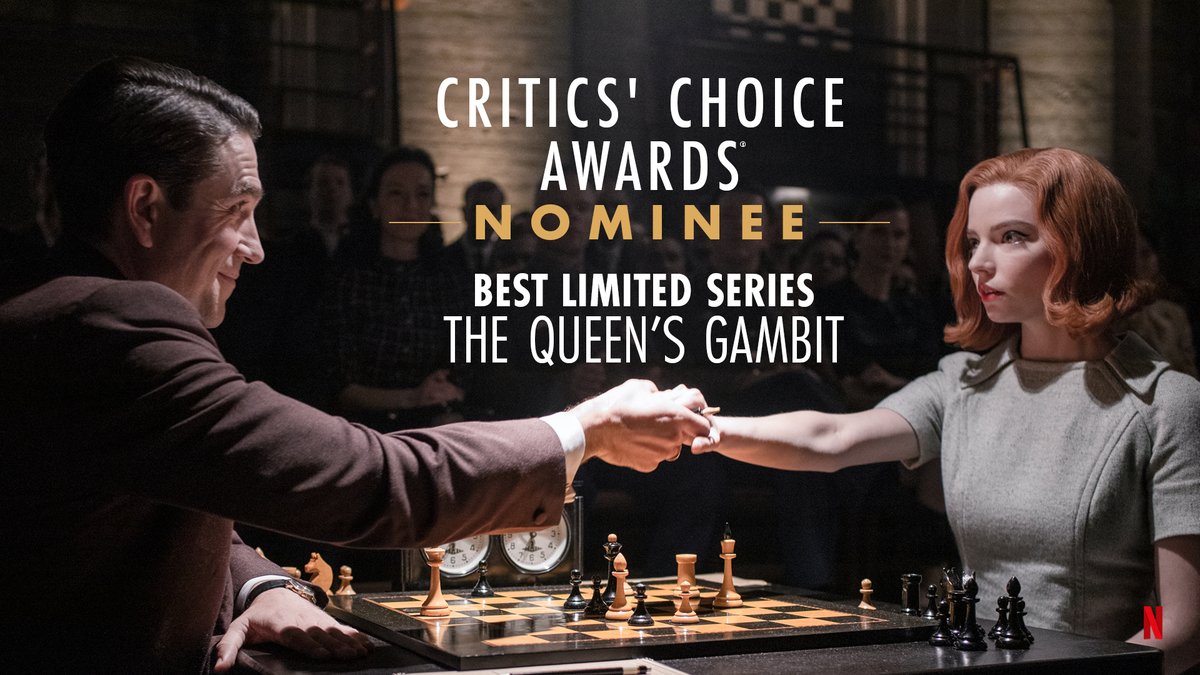 Since I am focusing on shows that have politics and government as a theme, I'm going to be a good environmentalist by recycling my observation that "'Mrs. America' explicitly portrays actual politicians and activists, so it is expressly about politics and government." On the other hand, “The Plot Against America” serializes an alternative history novel about a fascist takeover of America from the inside during World War II. Like "Mrs. America," it's very political. Both "I May Destroy You" and "Small Axe" are British, but examine political issues that affect Americans, the immigrant experience and what constitutes sexual consent. I'll let IMDB describe "The Undoing": "A modern twist to a classical 'whodunnit' tale, when the life of a wealthy New York therapist turns upside down after she and her family get involved with a murder case." Government intervenes in the form of the police. Both "Unorthodox" and "Normal People" feature relationship drama, but the former also shows the experiences of an immigrant — from U.S. to Germany — that's a twist!

Without Emmy winner "Watchmen" in the field, “Mrs. America” and "Unorthodox" the other nominated limited series with Emmy wins, have a chance at winning. However, their main competition are two shows that aired after the eligibility period for last year's Emmy awards, “The Plot Against America” and “The Queen's Gambit.” The latter appeared consistently in The top TV shows of 2020 according to IGN, WatchMojo, and IMDB, so I think it's actually the favorite, not “Mrs. America,” “The Plot Against America,” or "Unorthodox." If I'm right, sports, in as much as chess is a sport as well as a game, will beat politics.

BEST MOVIE MADE FOR TELEVISION

Bad Education (HBO)
Between the World and Me (HBO)
The Clark Sisters: First Ladies of Gospel (Lifetime)
Hamilton (Disney+)
Sylvie’s Love (Amazon Studios)
What the Constitution Means to Me (Amazon Studios)

Once again, I begin my analysis by recycling.

The two movies most likely to claim the award also happen to be about crime and punishment, "Bad Education" and "El Camino: A Breaking Bad Movie." Of the two, "Bad Education" sticks closer to one of the main themes I'm examining in this series, depictions of government and politics in entertainment, as it's a dramatization of a real-life scandal. From IMDB: "The beloved superintendent of New York's Roslyn school district and his staff, friends and relatives become the prime suspects in the unfolding of the single largest public school embezzlement scandal in American history." Remember, public schools are government institutions. On the other hand, "El Camino: A Breaking Bad Movie" is purely fictional and focuses less on government and more on the criminals. That written, it has four nominations to two for "Bad Education," so I think it's more likely to win.

The team from Bad Education wins the Emmy for Outstanding Television Movie.

Good speech about depicting a true story of corruption. I hope the CCA agrees with him about it. That reminds me; electorates matter, as the other nominee about politics and government is "Hamilton," which won two People's Choice Awards, The Drama Movie of 2020 and Lin-Manuel Miranda as The Drama Movie Star of 2020. Hey, the critics agree with the fans, at least in terms of nominating "Hamilton." While this nomination makes my prediction that "the show will be nominated for many guild awards, possibly a Golden Globe or two, and multiple Emmy Awards" look good, I would be surprised if it wins. Still, the critics have surprised me before. 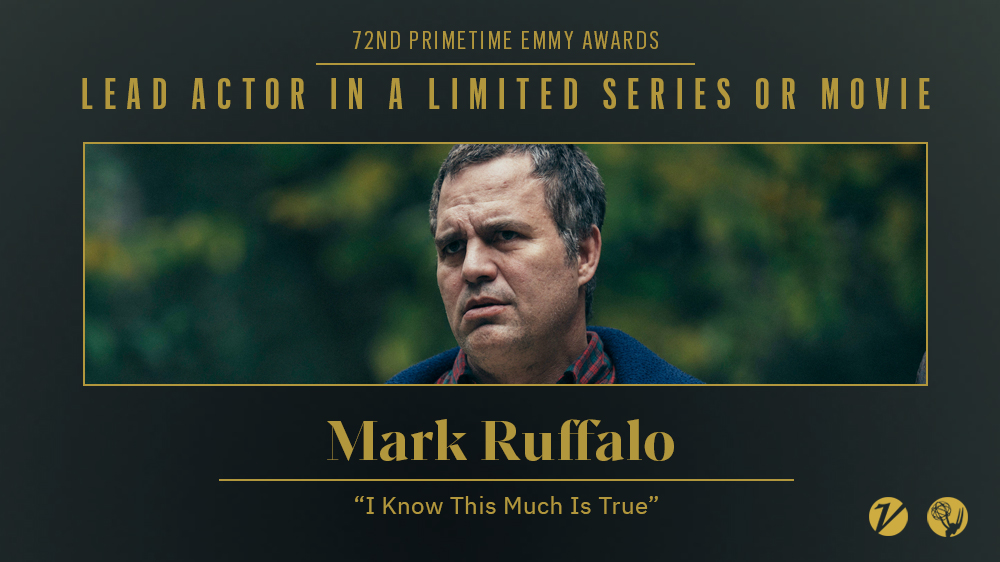 BEST ACTOR IN A LIMITED SERIES OR MOVIE MADE FOR TELEVISION

While "Small Axe" and "The Plot Against America" are the political films, I think Mark Ruffalo who won for Outstanding Lead Actor in a Limited Series or Movie is the most likely winner, followed by Hugh Grant, John Boyega, and Chris Rock. Watch his acceptance speech.

Mark Ruffalo wins the Emmy for Outstanding Lead Actor in a Limited Series or Movie.

LOL, "Well, now we know who would win a fight between The Hulk and Wolverine." Fortunately for Mark Ruffalo, Hugh Jackman wasn't nominated in this category. Remember, electorates matter. Seriously, that was a rousing speech from Ruffalo. I hope he gives just as good one if, as I suspect, he wins this award. 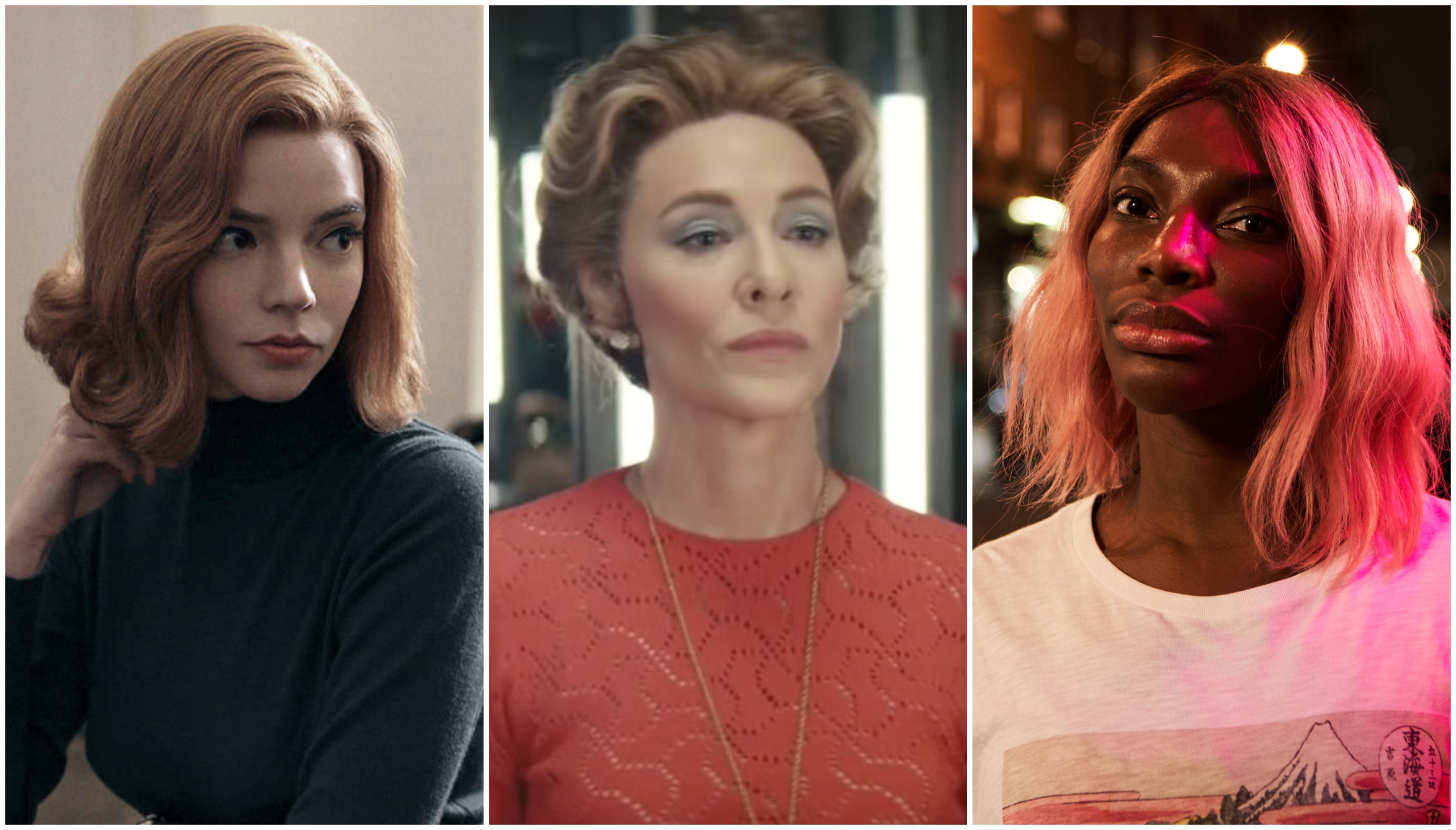 BEST ACTRESS IN A LIMITED SERIES OR MOVIE MADE FOR TELEVISION

This is an impressive field that is wide-open without Emmy winner Regina King nominated.* While I want Cate Blanchett to win, even though I dislike her character along with the real person she's based on, she has a lot of very stiff competition in Anya Taylor-Joy, Michaela Coel, Shira Haas, and Tessa Thompson. I think Daisy Edgar-Jones should just be happy to be nominated. On the other hand, I suspect Anya Taylor-Joy will win. 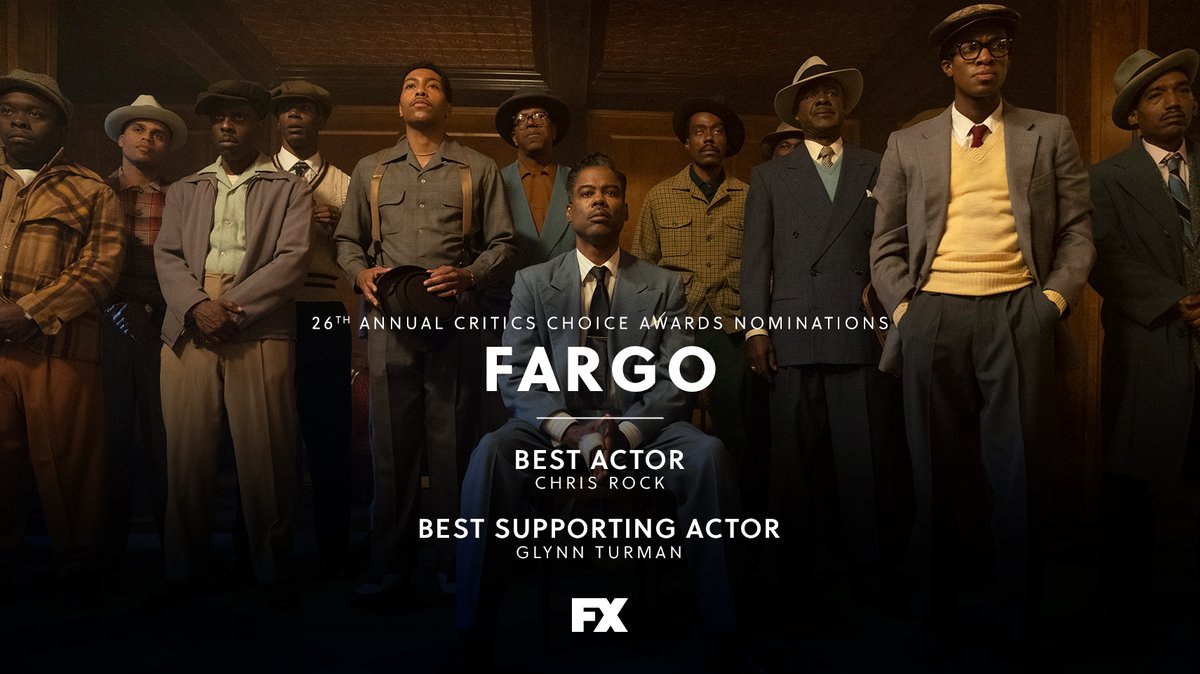 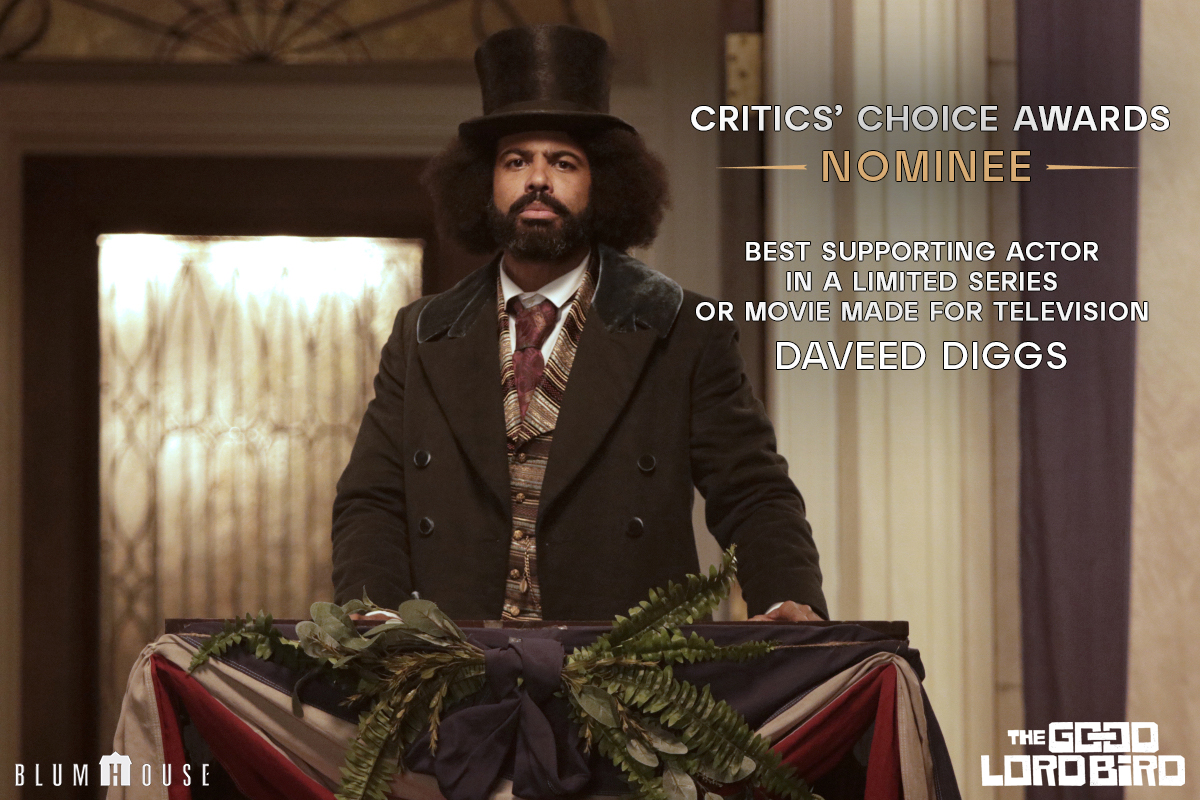 Only Dylan McDermott from "Hollywood" was nominated for the equivalent category at the Emmy Awards, so it's difficult for me to handicap this field. I also don't think he's going to win, as I expect it will be between Daveed Diggs for "The Good Lord Bird" and Donald Sutherland for "The Undoing." Between the two, I prefer Daveed Diggs just because of the IMDB description of "The Good Lord Bird."

Ethan Hawke stars as abolitionist John Brown in this series based on the novel. "Onion" is a fictional enslaved boy who becomes a member of Brown's family of abolitionist soldiers and finds himself in the 1859 raid at Harpers Ferry.

Now for the final category. 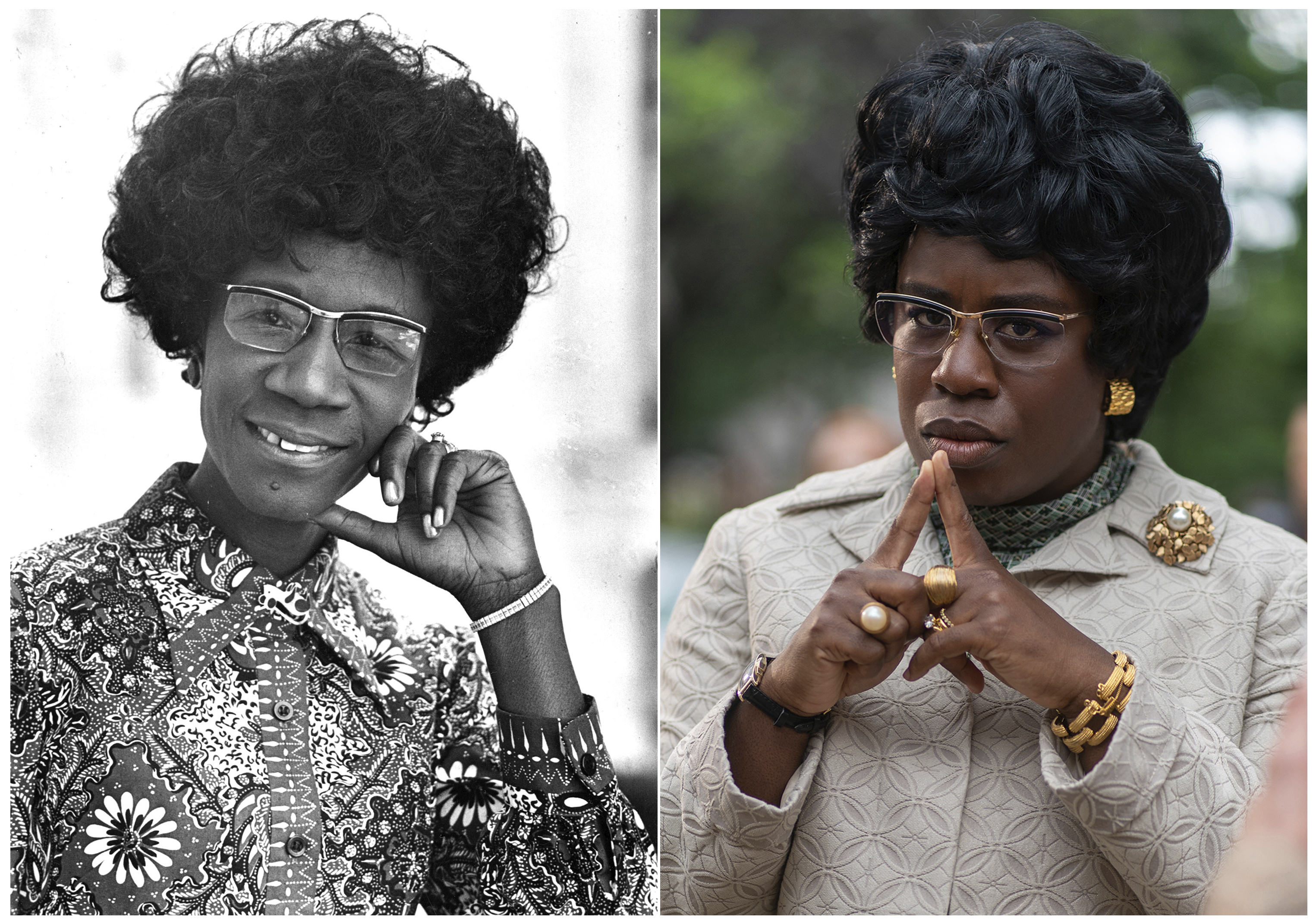 I think Uzo Aduba will win this just like she won the Emmy with Winona Ryder as her main competition. Then again, the critics could surprise me. Remember, electorates matter.

I plan on returning to the Critics Choice Awards when the film nominees are announced in two weeks. Stay tuned.

*I just realized that her name means "Queen King." After years of covering her nominations and awards, I feel slow.

Previous posts about the 2021 Critics Choice Awards
Posted by Pinku-Sensei at 11:48 AM