With five nominations each, “Schitt’s Creek” and “What We Do In The Shadows” lead all other comedy series in nominations at this year's Critics Choice Awards, so they're the featured shows today. 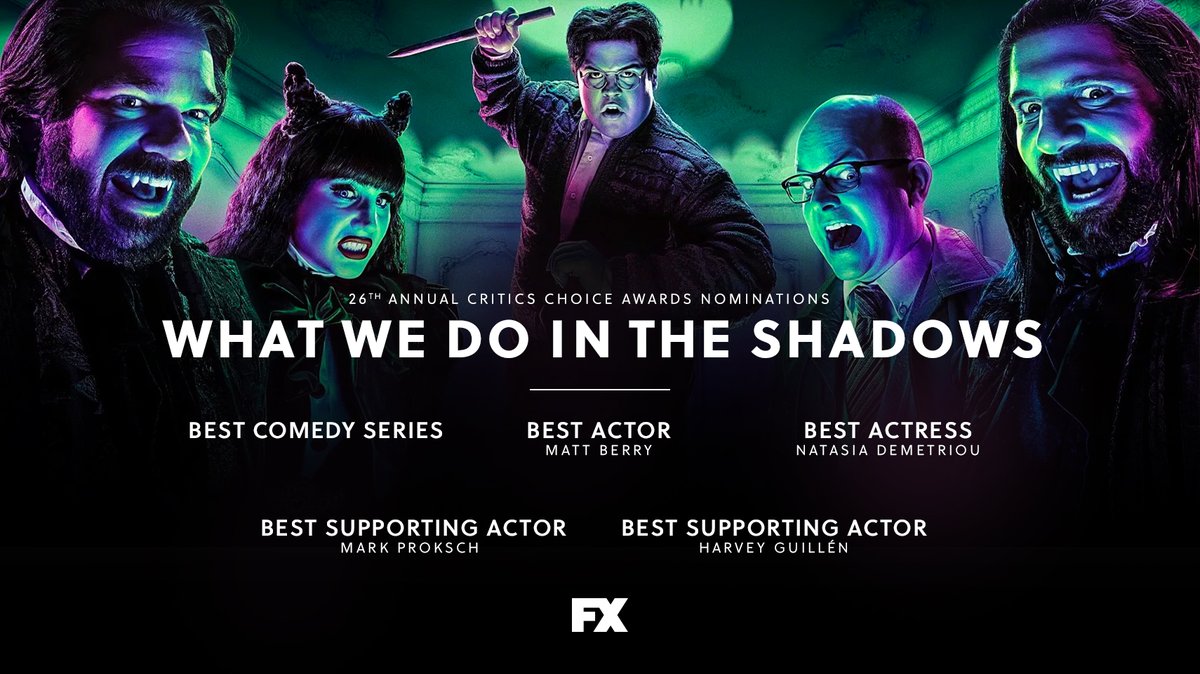 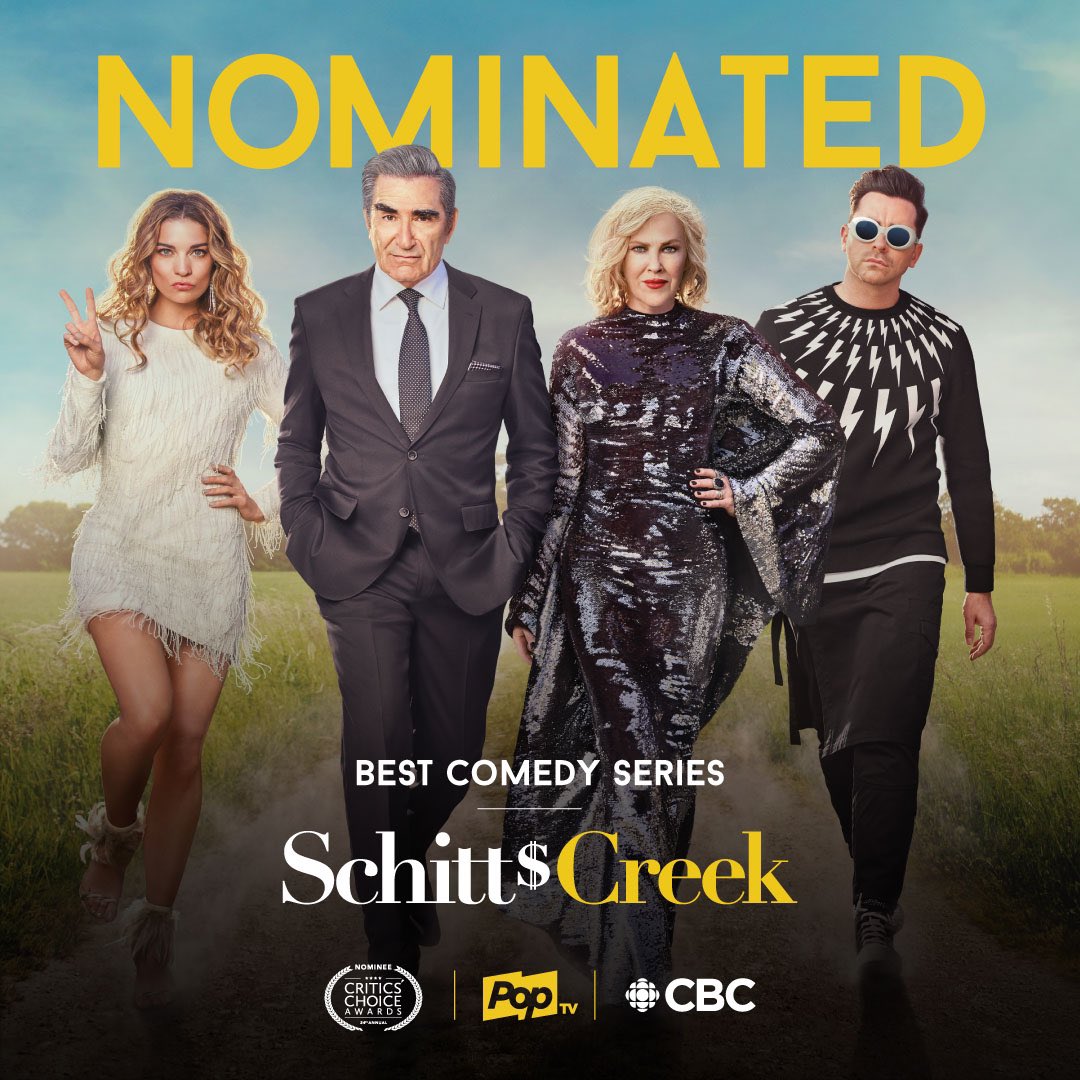 Both “Schitt’s Creek” and “What We Do in the Shadows” also earned nominations in the equivalent categories at the Television Critics Association Awards and the Emmy Awards, so I'll be a good environmentalist and recycle what I wrote for both of those.

"Schitt's Creek" concentrate[s] on family dynamics...as comedy...but politics and government contribute important, if secondary, plot elements. The Mayor of "Schitt's Creek" is an important supporting character and the female lead, Catherine O'Hara as Moira Rose, runs for town council and wins the seat.

So far, so good. Unfortunately, I was wrong in thinking "'What We Do in the Shadows' is not political...with its comedy vampires." It turns out that the series started out with the vampires trying to take over Staten Island by influencing the borough council, but that backfired. There is also a lot of political intrigue and comedic conflict among different factions of vampires with other fantastic creatures, particularly werewolves, so the show has a lot of fantastic politics.

Now for one last recycled item about the nominees for this category.

As for "Better Things," it's a show about show business. If the actors and other Hollywood professionals were voting for these awards, it would stand a better chance. Instead, the critics are, so it doesn't have that built-in advantage.

The remaining nominees with political or government themes are "PEN15," which takes place in a public school, a function of local government, and "Ramy," which examines the experiences of an immigrant community composed of Muslims, a religious minority in the U.S. That can't help but be political. In addition, law enforcement plays an important role as secondary antagonists in "The Flight Attendant," which succeeds as both a thriller and a comedy without being a parody of the thriller genre. Meanwhile, neither "Mom" nor "Ted Lasso" are particularly political in any conventional manner, although both feature a lot of family and workplace dynamics.

As for which show I expect will win, the easy choices are the two most nominated, “Schitt’s Creek” and “What We Do in the Shadows.” Of the two, I think the advantage goes to "Schitt's Creek," which won Outstanding Achievement in Comedy at the TCA Awards and Outstanding Comedy Series at the Emmy Awards. "What We Do in the Shadows" is the obvious second choice, but "Ted Lasso," which was a consistent pick in The top TV shows of 2020 according to IGN, WatchMojo, and IMDB could upset both.

The team from Schitt's Creek wins the Emmy for Outstanding Comedy Series.

That was sweet. Also, I'm embedding all of the Emmy acceptance speeches by its actors, one of whom is also a writer/director, so this is now an Emmy entry. Deal with it.

Follow over the jump for the comedy series acting nominations. 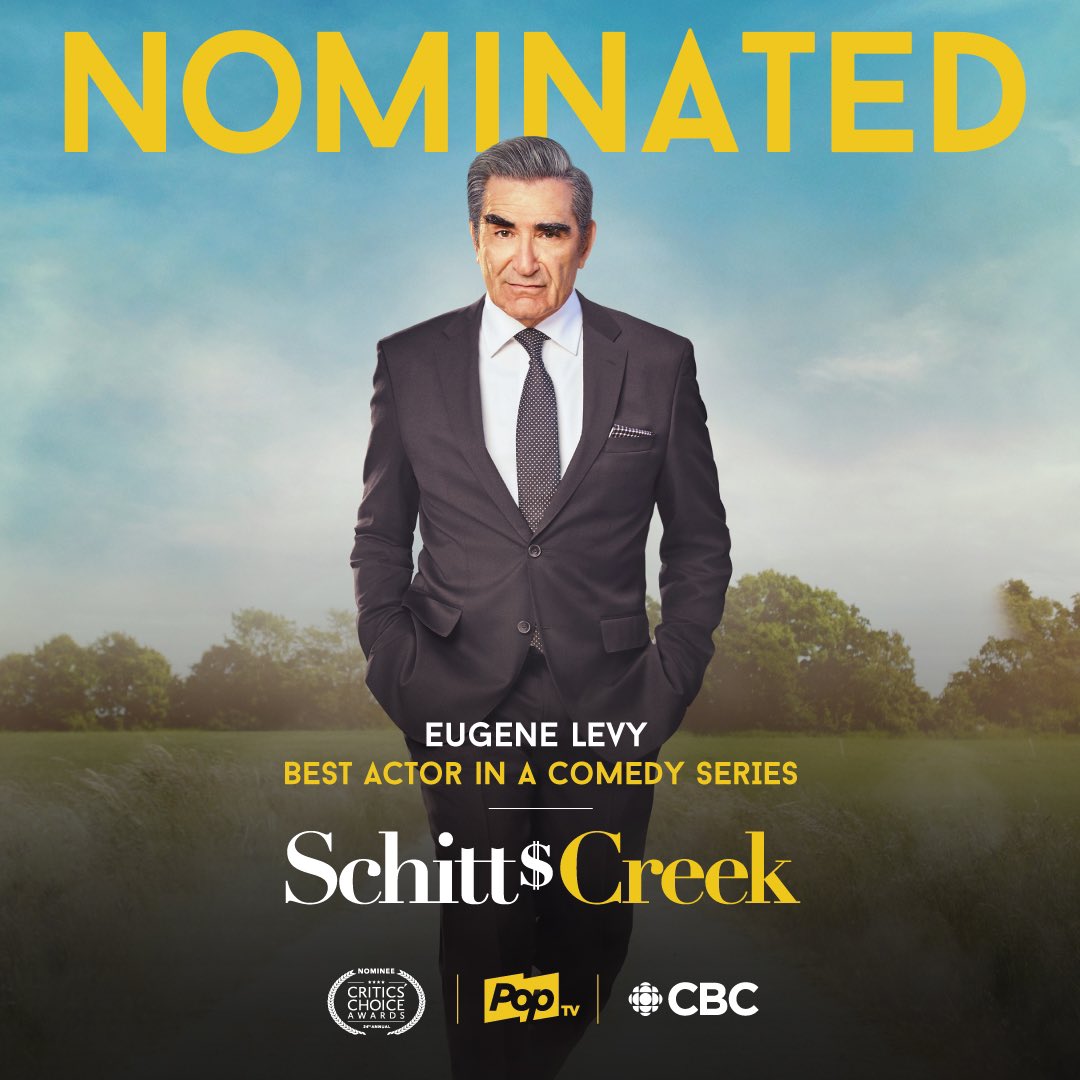 BEST ACTOR IN A COMEDY SERIES

I have a new show's description to recycle for this category.

"The Great" is the other series primarily about politics and government among the nominees for Outstanding New Program besides "Watchmen." It portrays the story of Empress Catherine the Great of Russia as a comedy.

As I wrote about his co-star Elle Fanning, Nicholas Hoult deserves the nomination, but his awards record is not as stellar as his competition. Speaking of whom, Ramy Youssef won a Golden Globe and earned an Emmy nomination for this role, Jason Sudeikis could upset the field, and Eugene Levy won the Emmy. Watch 72nd Emmy Awards: Eugene Levy Wins for Outstanding Lead Actor in a Comedy Series.

Eugene Levy wins the Emmy for Outstanding Lead Actor in a Comedy Series.

LOL, "No People's Choice Awards." That's among the better of the COVID-19 pandemic jokes and gags that the comedy section of the awards was full of. It also reminds me that "Schitt's Creek" didn't win a single category at the People's Choice Awards, instead losing to nominees that appealed to a younger audience. Again, electorates matter. 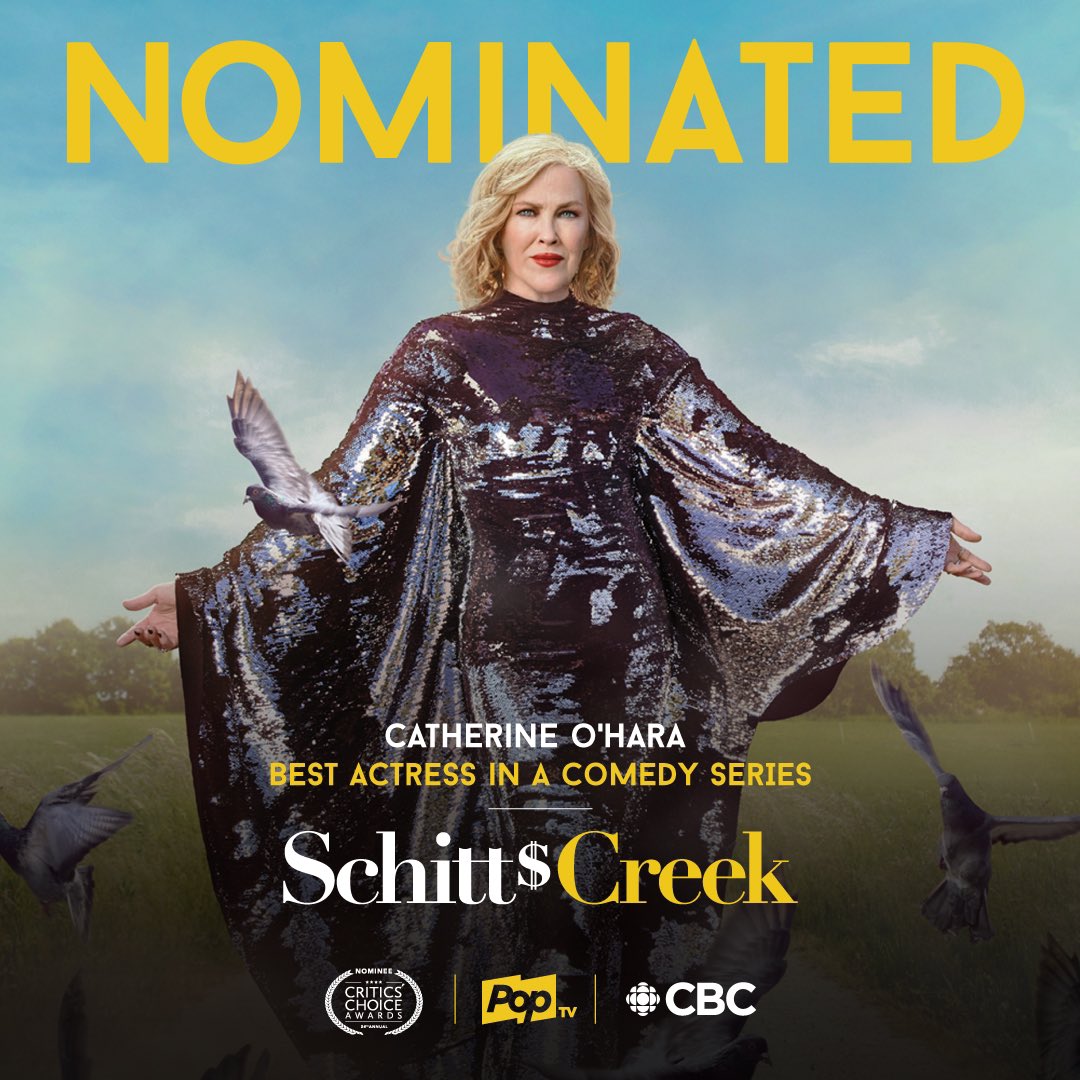 BEST ACTRESS IN A COMEDY SERIES

Time to recycle two more show's descriptions: "'Insecure' deals with race and other social issues, so it's very political, while the protagonists of 'Dead to Me' are dealing with the police among their many misadventures." While I'm supporting and expecting Catherine O'Hara to win, Natasia Demetriou surprised me by winning Best Actress in a Science Fiction/Fantasy Series, so I'm not counting her out; I learned my lesson. Now that's out of the way, watch 72nd Emmy Awards: Catherine O'Hara Wins for Outstanding Lead Actress in a Comedy Series.

Catherine O'Hara wins the Emmy for Outstanding Lead Actress in a Comedy Series.

O'Hara is just as warm and hilarious as herself as she was as Moira Rose. 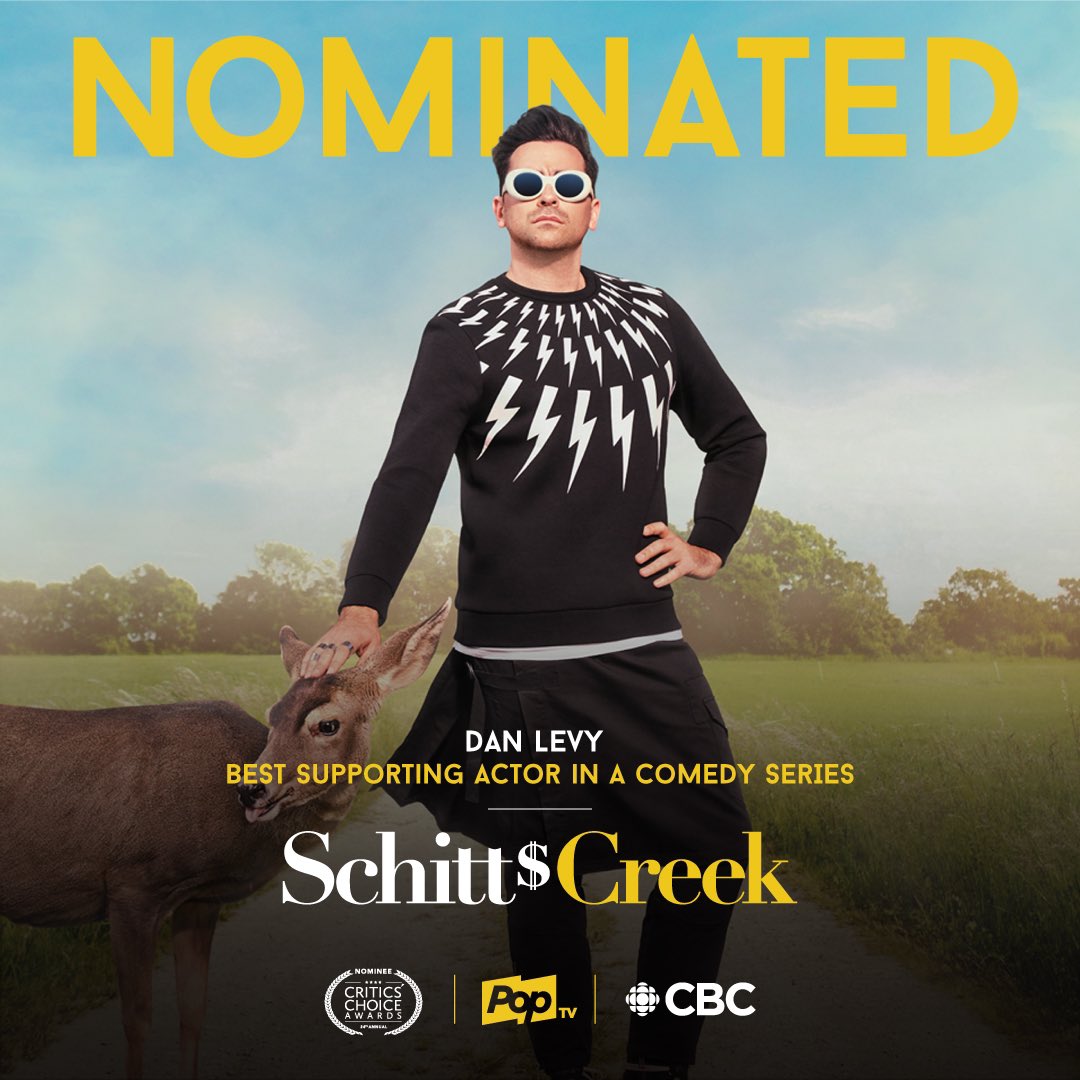 I doubt any of the other nominees can beat Daniel Levy, who was the big winner for "Schitt's Creek" at the Emmy Awards, taking three statuettes home. Watch all three, beginning with 72nd Emmy Awards: Daniel Levy Wins for Outstanding Supporting Actor in a Comedy Series.

Daniel Levy wins the Emmy for Outstanding Supporting Actor in a Comedy Series.

Dan Levy wins the Emmy for Outstanding Writing for a Comedy Series.

Look at how many episodes of "What We Do in the Shadows" were nominated! Still, "Happy Endings" was a masterfully written episode. It was also a masterfully directed. Watch 72nd Emmy Awards: Andrew Cividino and Daniel Levy Win for Outstanding Directing for a Comedy Series.

Andrew Cividino and Daniel Levy win the Emmy for Outstanding Directing for a Comedy Series.

Now for the final acting category. 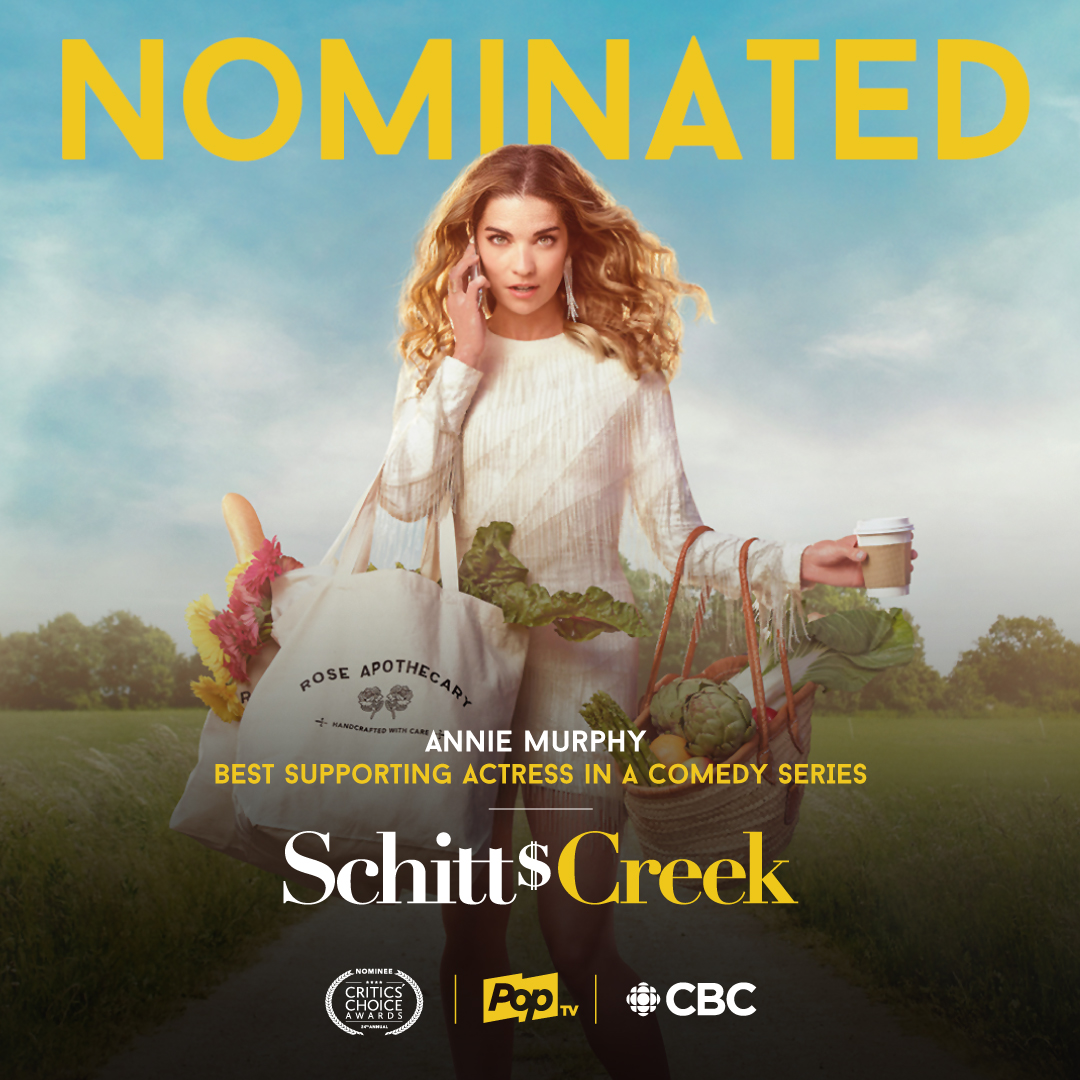 Out of this group, Anne Murphy's strongest competition is EGOT holder Rita Moreno, but I don't know if her role is as strong as Murphy's. Speaking of which, here is the final acceptance speech I'm embedding today, 72nd Emmy Awards: Annie Murphy Wins for Outstanding Supporting Actress in a Comedy Series.

Annie Murphy wins the Emmy for Outstanding Supporting Actress in a Comedy Series.

I tweeted "I predict a sweep by Schitt's Creek" at the Primetime Emmy Awards and that happened. It could also happen at the Critics Choice Awards. Congratulations to the cast and crew of "Schitt's Creek" for an outstanding six seasons and all of their wins at last year's Emmy Awards.

That's it for comedy series nominees. Stay tuned for the limited series and television movies nominees.