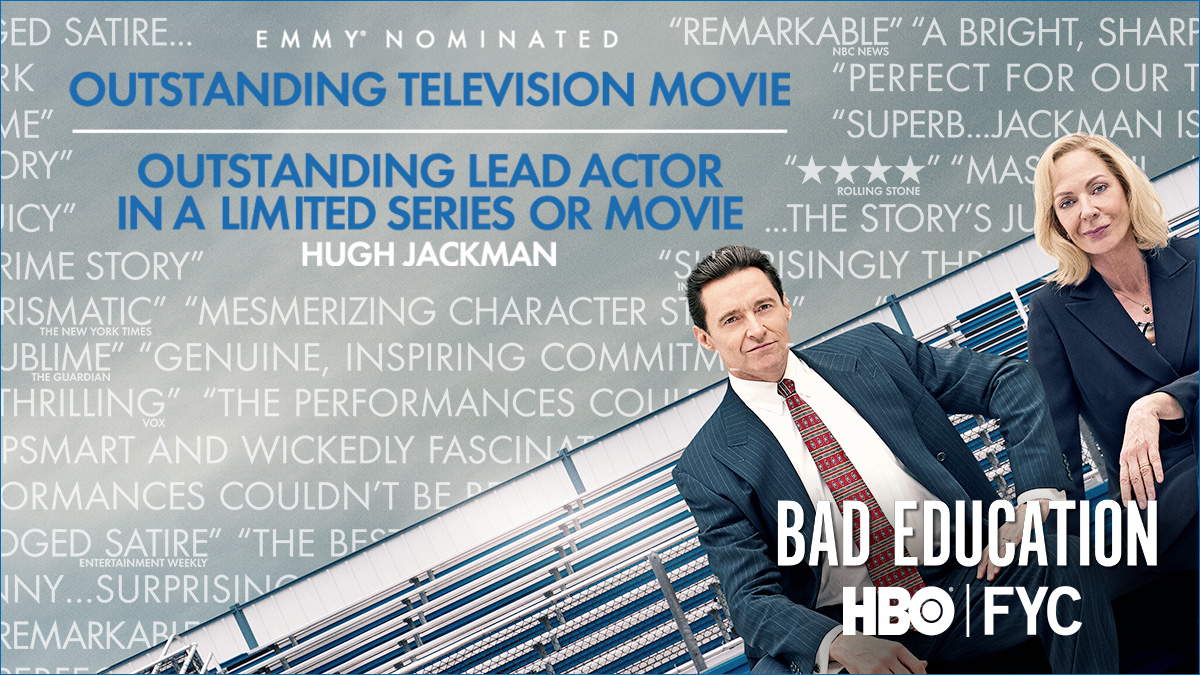 I told my readers to "Stay tuned," as "I'm skipping to television movies for the next installment of this series" to conclude 'Queer Eye' leads structured reality program nominees at the Emmy Awards while 'preaching love, acceptance, pride, and compassion'. Here are the Emmy nominations for television movies followed by my comments on how much they focus on politics and government and their chances of winning. 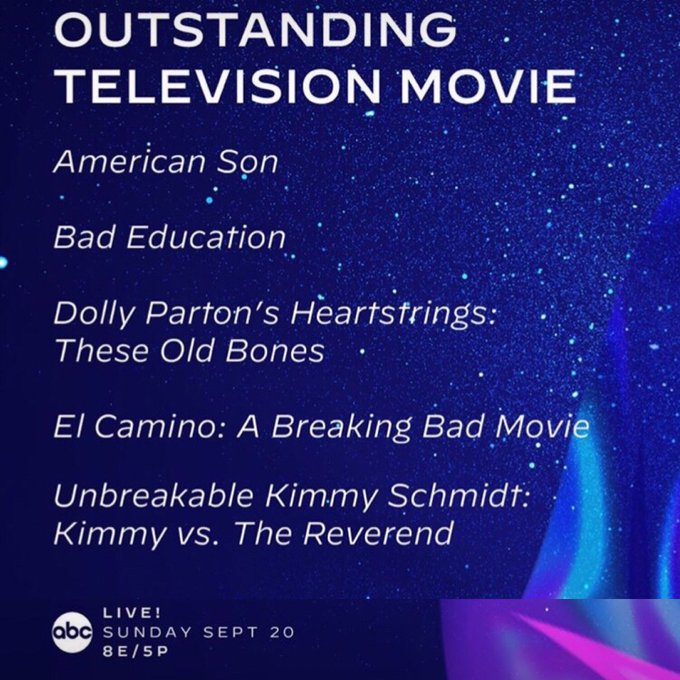 Look! No "Black Mirror!" That means that the field is clear for a movie part of the anthology series. The two movies most likely to claim the award also happen to be about crime and punishment, "Bad Education" and "El Camino: A Breaking Bad Movie." Of the two, "Bad Education" sticks closer to one of the main themes I'm examining in this series, depictions of government and politics in entertainment, as it's a dramatization of a real-life scandal. From IMDB: "The beloved superintendent of New York's Roslyn school district and his staff, friends and relatives become the prime suspects in the unfolding of the single largest public school embezzlement scandal in American history." Remember, public schools are government institutions. On the other hand, "El Camino: A Breaking Bad Movie" is purely fictional and focuses less on government and more on the criminals. That written, it has four nominations to two for "Bad Education," so I think it's more likely to win.

Out of the rest of the nominees, both "American Son" and "Unbreakable Kimmy Schmidt: Kimmy vs the Reverend" also have government in the form of law enforcement as settings, if not themes, as "American Son" takes place in a police station while "Unbreakable Kimmy Schmidt: Kimmy vs the Reverend" has a prison as one of its settings. Only "Dolly Parton's Heartstrings: These Old Bones" has nothing to do with government; it's a musical.

Next, two acting nominations that will be presented at the Primetime Emmy Awards. 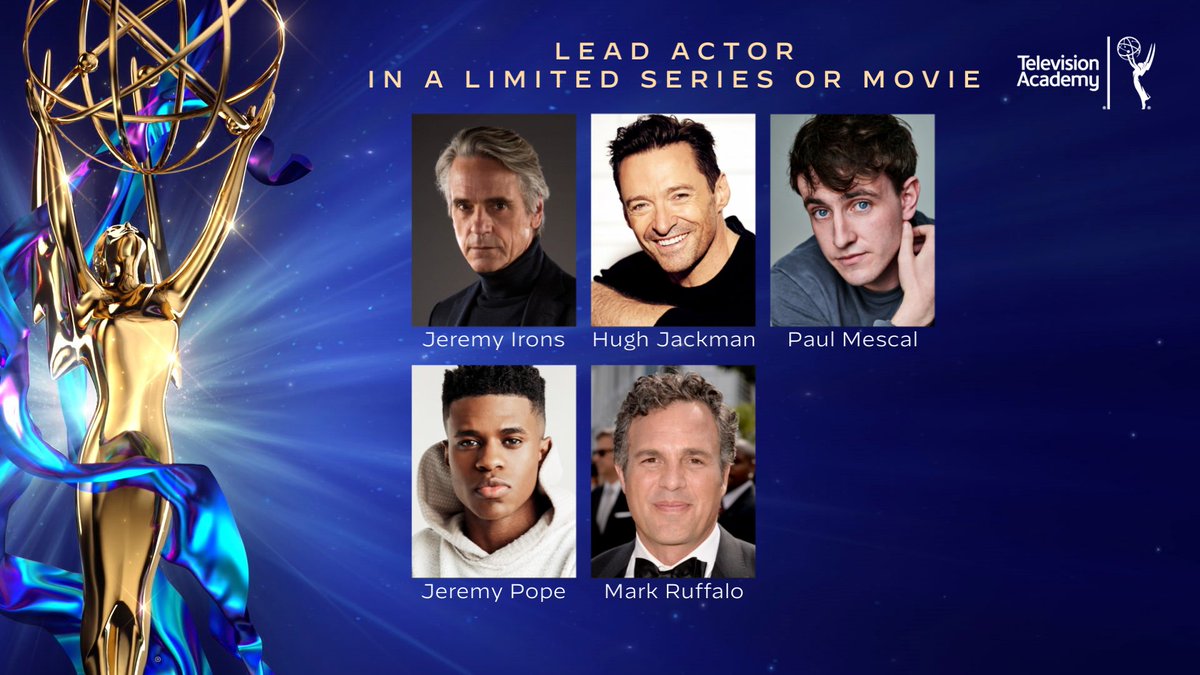 Outstanding Lead Actor in a Limited Series or Movie

Jeremy Irons as Adrian Veidt on Watchmen (HBO)
Hugh Jackman as Dr. Frank Tassone on Bad Education (HBO)
Paul Mescal as Connell Waldron on Normal People (Hulu)
Jeremy Pope as Archie Coleman on Hollywood (Netflix)
Mark Ruffalo as Dominick and Thomas Birdsey on I Know This Much Is True (HBO)

This is a prestigious enough award that the Television Academy made a video for it. Watch Tatiana Maslany announce the nominees in 72nd Emmy Nominations: Outstanding Lead Actor in a Limited Series.

The television movie nominee is Hugh Jackman for "Bad Education." He belongs here, but he's not likely to win; the competition is too stiff. The nominees from limited series will likely outpoll him. As for my pick, I'll repeat what I wrote in 'Watchmen' and 'Unbelievable' lead nominees about politics and government at the 2020 Television Critics Association Awards: "I would not count out three-time Oscar nominee and Emmy winner as a producer Mark Ruffalo, the one actor from a show not nominated for Program of the Year, who played a set of very different identical twins in 'I Know This Much Is True.'" It's between Ruffalo and Jeremy Irons, who played what I would barely call a leading role as Adrian "Ozymandias" Veidt in the very political "Watchmen." 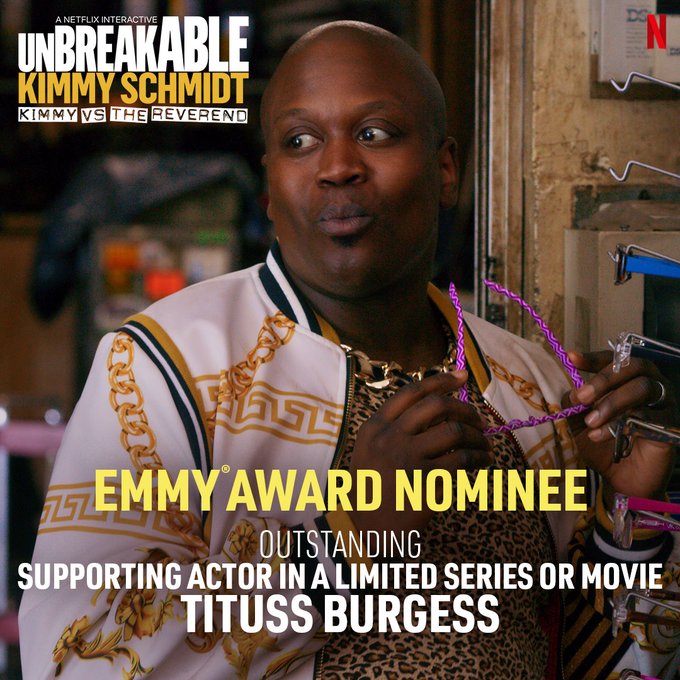 Follow over the jump for the rest of the nominations for "El Camino: A Breaking Bad Movie" at the Creative Arts Emmy Awards. 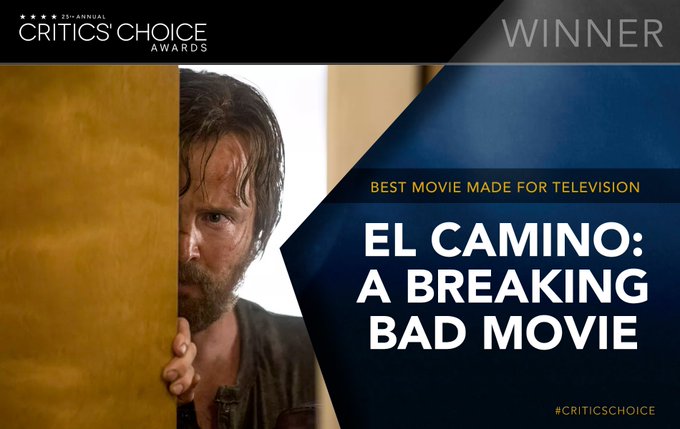 Outstanding Single-Camera Picture Editing for a Limited Series or Movie

As long as the Emmy electorate settles on a best episode out of the three from "Watchmen," the superhero limited series will take home an award in this category. If they don't, then it's between the very political "Mrs. America" and "El Camino: A Breaking Bad Movie." In that case, I think "Mrs. America" will win.

Outstanding Sound Editing for a Limited Series, Movie, or Special

Four of the same nominees appear in the next category.

Outstanding Sound Mixing for a Limited Series or Movie

I think it's between the two speculative fiction entries for these two awards, "American Horror Story: 1984" and "Watchmen." If I'm right, "Watchmen" will win.

I plan on continuing the series tomorrow for the Sunday entertainment feature, although I'm torn between children's programming and animation on the one hand and music and dance nominees on the other. It's been a long time since I've asked for my readers to help me decide, but I'm feeling like asking now. Comments, anyone?

Previous posts about the 2020 Primetime and Creative Arts Emmy Awards
Posted by Pinku-Sensei at 11:50 AM