I recommended 'Spaceship Earth,' a documentary about Biosphere 2, to my students 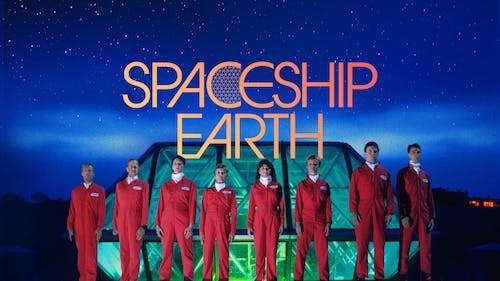 I changed my mind since I told my readers "I may return to examine "The Social Dilemma" as I promised in 'Crip Camp: A Disability Revolution' at the Critics' Choice Documentary Awards" at the end of Samantha Bee, CNBC, and Vox examine tech companies suspending Trump from social media. I'm still planning on doing that but I decided to write about another movie nominated at the Critics Choice Documentary Awards that I recommended to my students this week, "Spaceship Earth," which IMDB describes as "a look at the group of people who built the Biosphere 2, a giant replica of the earth's ecosystem, in 1991." Watch SPACESHIP EARTH Trailer (2021) Biosphere 2 Documentary.

Spaceship Earth is the true, stranger-than-fiction, adventure of eight visionaries who in 1991 spent two years quarantined inside of a self-engineered replica of Earth’s ecosystem called BIOSPHERE 2. The experiment was a worldwide phenomenon, chronicling daily existence in the face of life threatening ecological disaster and a growing criticism that it was nothing more than a cult. The bizarre story is both a cautionary tale and a hopeful lesson of how a small group of dreamers can potentially reimagine a new world.

I use the story of Biosphere 2 as an example of a failure to exercise humility. I mentioned that in a comment to A Faint Whiff of Lemonade at Ecosophia.

"Cataloging a documentary about the Biosphere 2 project at work today" — Is it Spaceship Earth? I ran across it while blogging about the Critics' Choice Documentary Awards. It was nominated for Best Archival Documentary and Best Science/Nature Documentary, but didn't win either, losing to MLK/FBI for the first and My Octopus Teacher for the second. That documentary caught my attention because I use Biosphere 2 in my lectures as an example of failing to follow the environmental principle of humility, knowing the limits of one's knowledge. When I return to in-person classes, I plan on referring my students to that movie for more.

If people don't know the limits of their knowledge, they make mistakes. In the case of Biosphere 2, the mistake was thinking that humans knew enough about how ecosystems operated in 1991 to make the experiment work. The answer turned out to be no. As the trailer shows, that failure manifested as a spike in carbon dioxide levels, which endangered the crew. Biosphere 2: A Faulty Mars Survival Test Gets a Second Act | Retro Report explored that part of the failure and more.

With dreams of one day colonizing space, eight people sealed themselves inside a giant glass biosphere in the Arizona desert in 1991. By the time they emerged two years later, they had suffocated, starved and went mad.

Retro Report mentioned another failure of human knowledge at the time, which was the inability of Biosphere 2 to produce enough food to maintain the weights of the crew, although they all survived. Both the "Spaceship Earth" trailer and Retro Report also included reports of conflict within the crew. That's a scientific failure of a different kind than either maintaining an atmosphere humans can breathe or producting enough food, but it's one that space exploration and colonization will have to solve as well.

For what it's worth, the addition of Steve Bannon, who supervised a second mission not expressly mentioned in the "Spaceship Earth" trailer, although the police raid shown briefly was likely from that time, had mixed effects. According to Wikipedia, "extensive research and system improvements were undertaken, including sealing concrete to prevent the uptake of carbon dioxide," which paradoxically contributed to the carbon dioxide spike because the concrete also absorbed oxygen and "The second crew achieved complete sufficiency in food production." Both of those showed that the people running Biosphere 2 had learned valuable lessons from the first crew. On the other hand, Bannon's takeover led members of the first crew to allegedly vandalize the project from outside, breaking windows and opening airlocks They filed "an 'abuse of process' civil lawsuit...against Space Biosphere Ventures," the company that ran Biosphere 2 at the time, that they ended up winning, although they had to pay back some of their award to compensate for the damage they caused. Those were failures beyond the science involved in making Biosphere 2 work.

Even if I thought Biosphere 2 was a complete failure, which I don't, it would still be a valuable lesson for my students. As I wrote here 10 years ago and occasionally tell my students, no one is completely useless; they can always be used as a bad example.
Posted by Pinku-Sensei at 4:47 PM