I finished 'The Boys' leads all winners at the Critics Choice Super Awards with four awards, an examination of politics with superheroes by telegraphing my plans for celebrating today's federal holiday.

I'm not done with entertainment. Stay tuned for MLK Day tomorrow, when I usually examine diversity in visual media.

This is a tradition I have observed on this blog for the past six years, as I noted last year.

Time to be a good environmentalist and recycle my salutation to my readers from celebrating diversity in awards shows nominees and winners for MLK Day.

A happy and contemplative Martin Luther King Day to my readers! To celebrate, I'm continuing the tradition I began with 'Glory' from 'Selma' for MLK Day and continued with Hollywood's diversity issues for MLK Day and 'Hidden Figures' tops the box office for MLK Day plus diversity among Golden Globes winners, examining diversity and representation in entertainment....

Since most of the awards shows have not announced their nominations yet, I'm going to use today as an opportunity to resume writing about the rest of this year's Emmy winners by looking at diversity among the winners for limited series, where "Watchmen" and "Mrs. America" had the most diverse award recipients, at least six people of color winning for "Watchmen" and one for "Mrs. America." That's as many winners of color as the Comedy Series and Drama Series combined!

...This field is very similar to the one at the 2020 Television Critics Association Awards, so I'll be a good environmentalist and recycle.

Both "Watchmen" and "Unbelievable" examine politics and government through the lens of law enforcement. "Watchmen" views crime and punishment using a fantastic and futuristic perspective (even though it takes place in 2019, it's not our 2019), while "Unbelievable" based its story on real events..."Mrs. America" explicitly portrays actual politicians and activists, so it is expressly about politics and government..."Little Fires Everywhere" explores social issues and includes a trial at the climax of the series, so a government function becomes a critical plot point...As for the winner, I'll repeat what I wrote for Program of the Year, "I'm hoping it's 'Watchmen'...but it could just as easily be 'Unbelievable.'" It could even be "Mrs. America" as a spoiler.

Since I wrote that, "Watchmen" won four awards from the Television Critics Association, Program of the Year, Outstanding New Program, Outstanding Achievement In Movie, Miniseries, Or Special, and Individual Achievement In Drama for Regina King. "Watchmen" also won Limited Series and King won Movie/Limited Series Actress at the Gold Derby Awards. Because of those awards, as well as the five Emmy Awards the superhero show has already won, I'm even more confident that "Watchmen" will win this category.

That was worth including just for Anthony Anderson of "Black-ish" mentioning that last year's Emmys had a record number of African-American nominees opening his introduction. The same is true for Damon Lindelof's speech. While he is not a person of color, he helped created a speculative fiction program about America's history of racism that used the Tulsa Massacre as a pivotal event, to paraphrase what I wrote about "Lovecraft Country" in Fantastic and futuristic politics and government nominees at the Critics Choice Super Awards for National Science Fiction Day, and which Lindelof himself recognized in his shirt saying "Remember Tulsa '21," so the show itself winning an award deserves recognition today.

Follow over the jump to read about the individual winners recognized for their work in limited series and television movies. 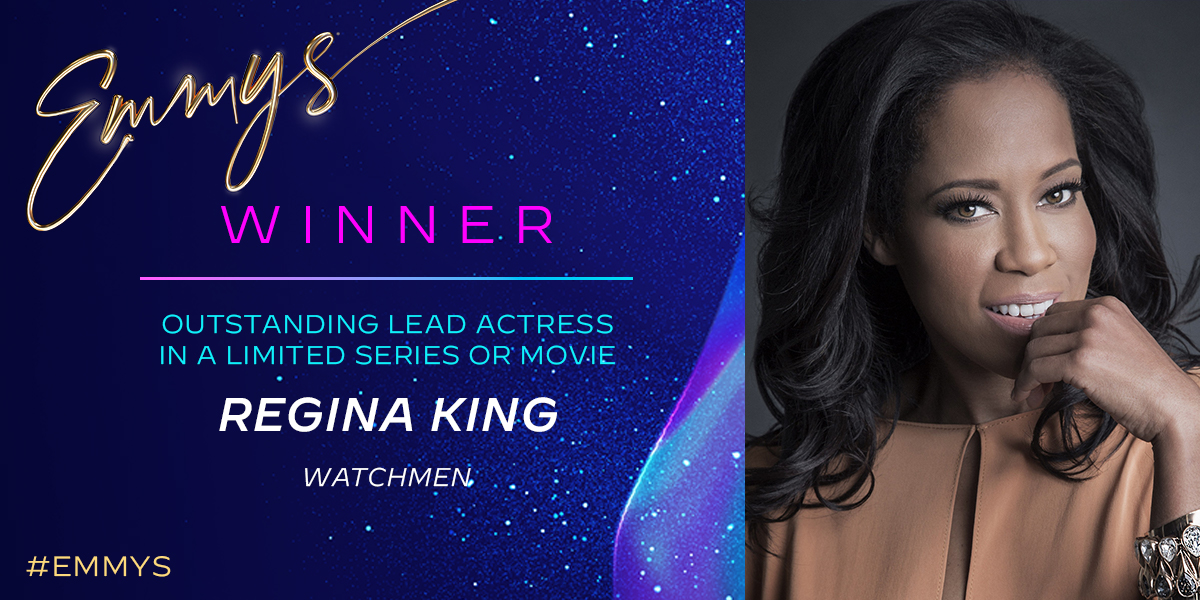 Next, Outstanding Lead Actress in a Limited Series or Movie, won by Regina King.

As I wrote above, the nominees from political shows are Cate Blanchett as Phyllis Schlafly on "Mrs. America," Regina King as Angela Abar/Sister Night on "Watchmen," and Kerry Washington as Mia Warren on "Little Fires Everywhere." I know that I wrote "based on previous awards experience, I would say that two-time Oscar winner Cate Blanchett is the favorite, followed by Oscar and two-time Emmy winner Regina King," but King's two victories at the TCA Awards and Gold Derby Awards along with her win at the Critics' Choice Awards are enough to convince me she's the favorite. Good, I want her to win.

And she did. Watch 72nd Emmy Awards: Regina King Wins for Outstanding Lead Actress in a Limited Series or Movie.

Regina King wins the Emmy for Outstanding Lead Actress in a Limited Series or Movie.

While Anderson had a point about not having all the nominees and winners in the theater so that America could see all of them at once, having the awards presented at the winners' homes allowed them to make statements with their attire that they couldn't have wearing evening gowns and tuxedos. Lindelof had "Remember Tulsa '21" and King had a shirt with Breonna Taylor's image on it and the message "Say her name." On the other hand, her speech, mentioning Coffee Party USA partner Ballotpedia and mourning Ruth Bader Ginsburg, was the kind of political statement could have made on stage instead of in her living room. That written, the intimate surroundings and lack of an orchestra to play her off made her sentiments more salient, so things balanced out. 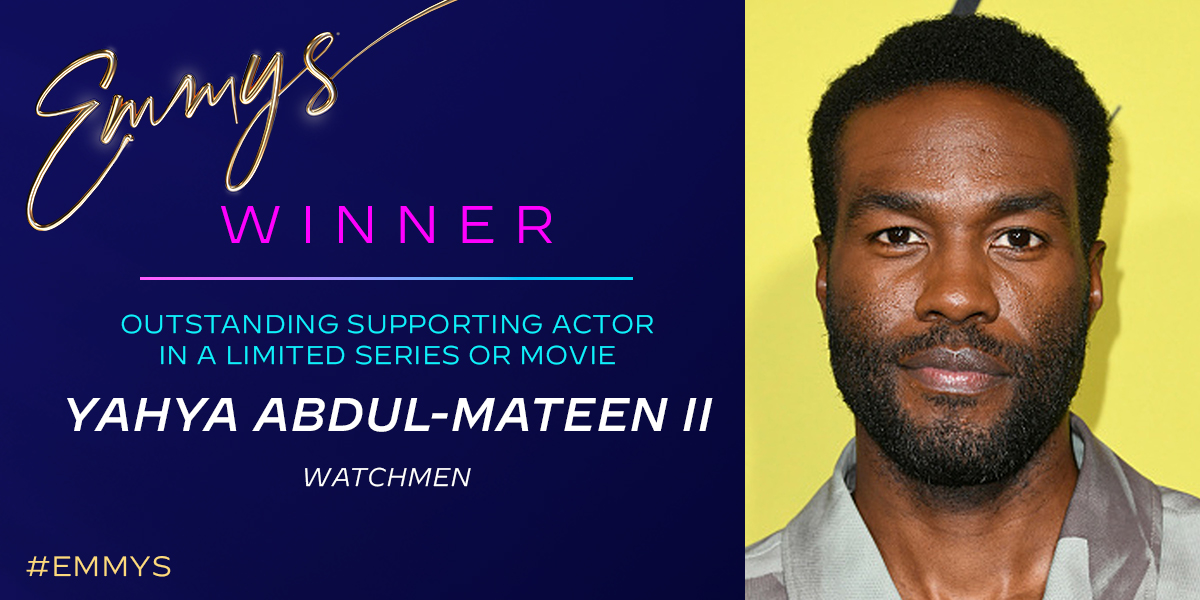 I'm glad the Emmy electorate agreed with my choice instead of what I expected from them. Watch 72nd Emmy Awards: Yahya Abdul-Mateen II Wins for Outstanding Supporting Actor in a Limited Series/Movie.

Yahya Abdul-Mateen II wins the Emmy for Outstanding Supporting Actor in a Limited Series or Movie.

That was a very heartfelt acceptance speech by Abdul-Mateen that struck the right balance between the personal and political. Also, kudos to Tituss Burgess for toasting him back; that shows he's a good sport. 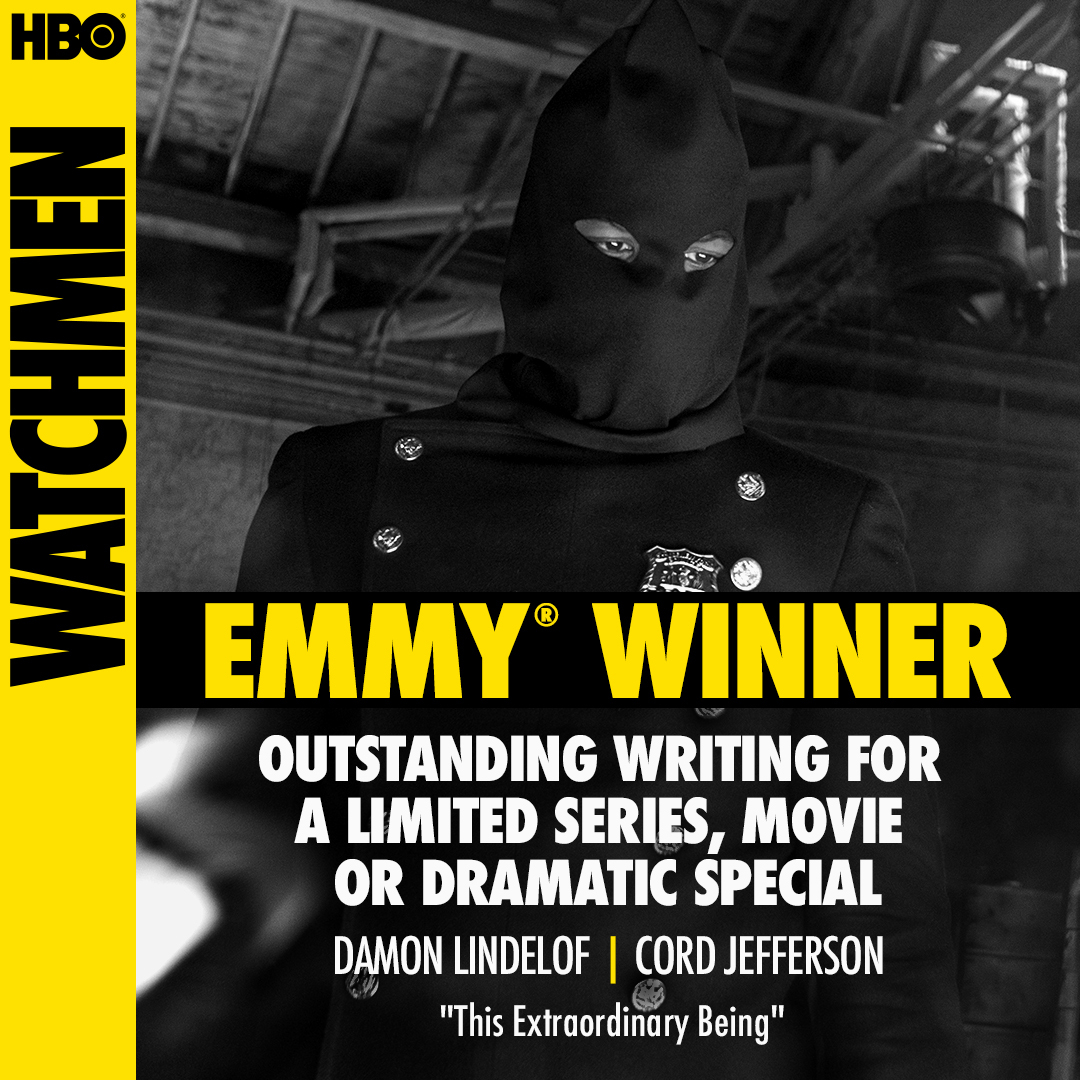 Next the diverse talent behind the camera, beginning with Cord Jefferson, who won Outstanding Writing for a Limited Series, Movie or Dramatic Special along with Damon Lindelof.

Outstanding Writing for a Limited Series, Movie, or Dramatic Special

"Watchmen" won the award for New Series and was nominated for Drama Series at the Writers Guild of America while no other limited series was even nominated for either award, so it's my choice to win here, too.

Damon Lindelof and Cord Jefferson win the Emmy for Outstanding Writing for a Limited Series Movie or Drama Special.

I'm glad Cord Jefferson gave the acceptance speech; Lindelof had his time in the spotlight for the series win. As for his speech, it was very standard and could have been given on stage — Jefferson even wore a tux — including the mention of the Tulsa Massacre, which he called "the original sin of our show" and the call to remember our history. Honestly, if it weren't for "Watchmen," a lot of white Americans would never have heard of it. 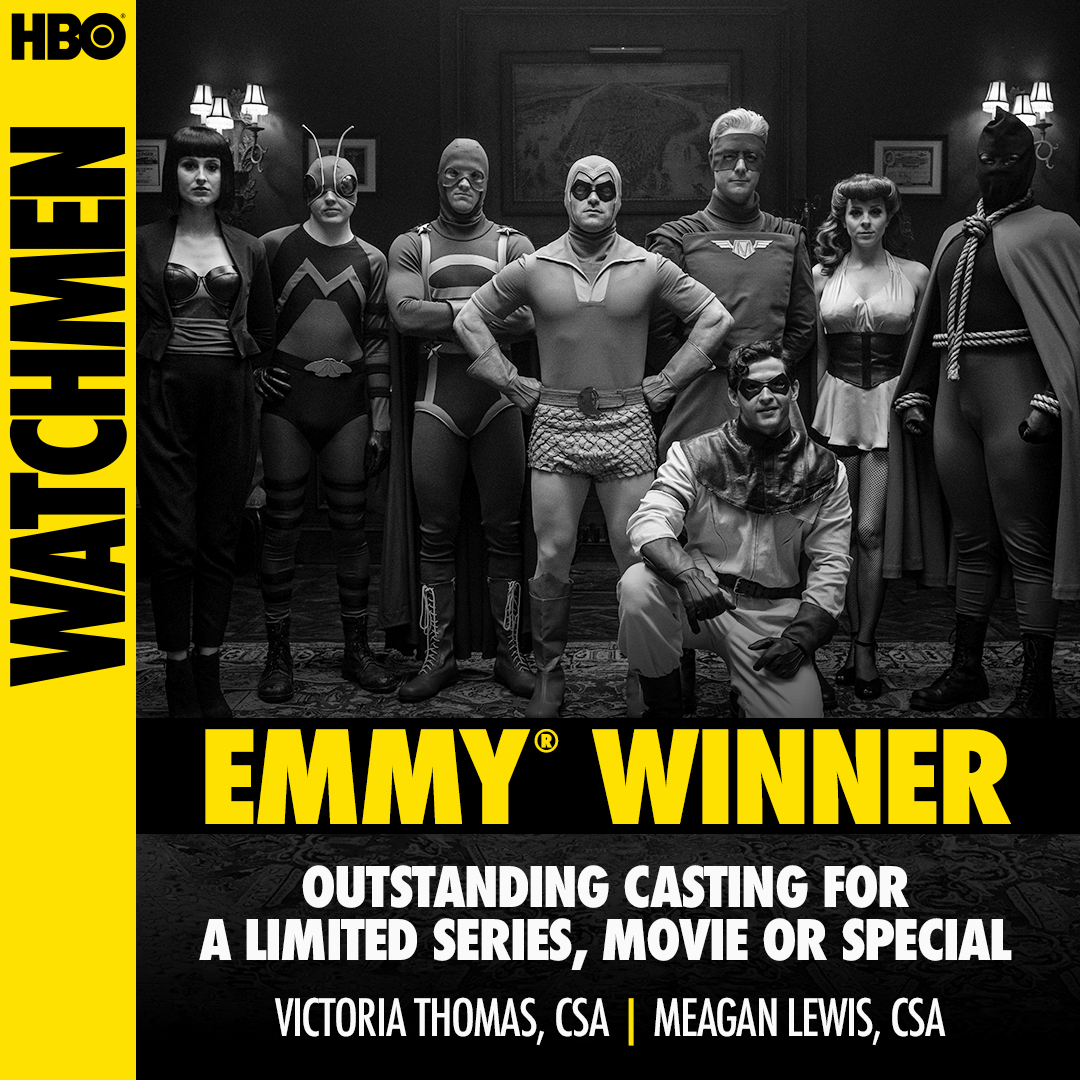 I may be done with the awards "Watchmen" won at the Primetime Emmy Awards, but I have two more awards for the superhero series from the 2020 Creative Arts Emmys to share beginning with Casting for a Limited Series Movie or Special.

The team from Watchmen wins the Emmy for Outstanding Casting for a Limited Series Movie or Special.

That's Victoria Thomas (casting director) accepting the award. She shows that having representation and diversity behind the camera matters as well. 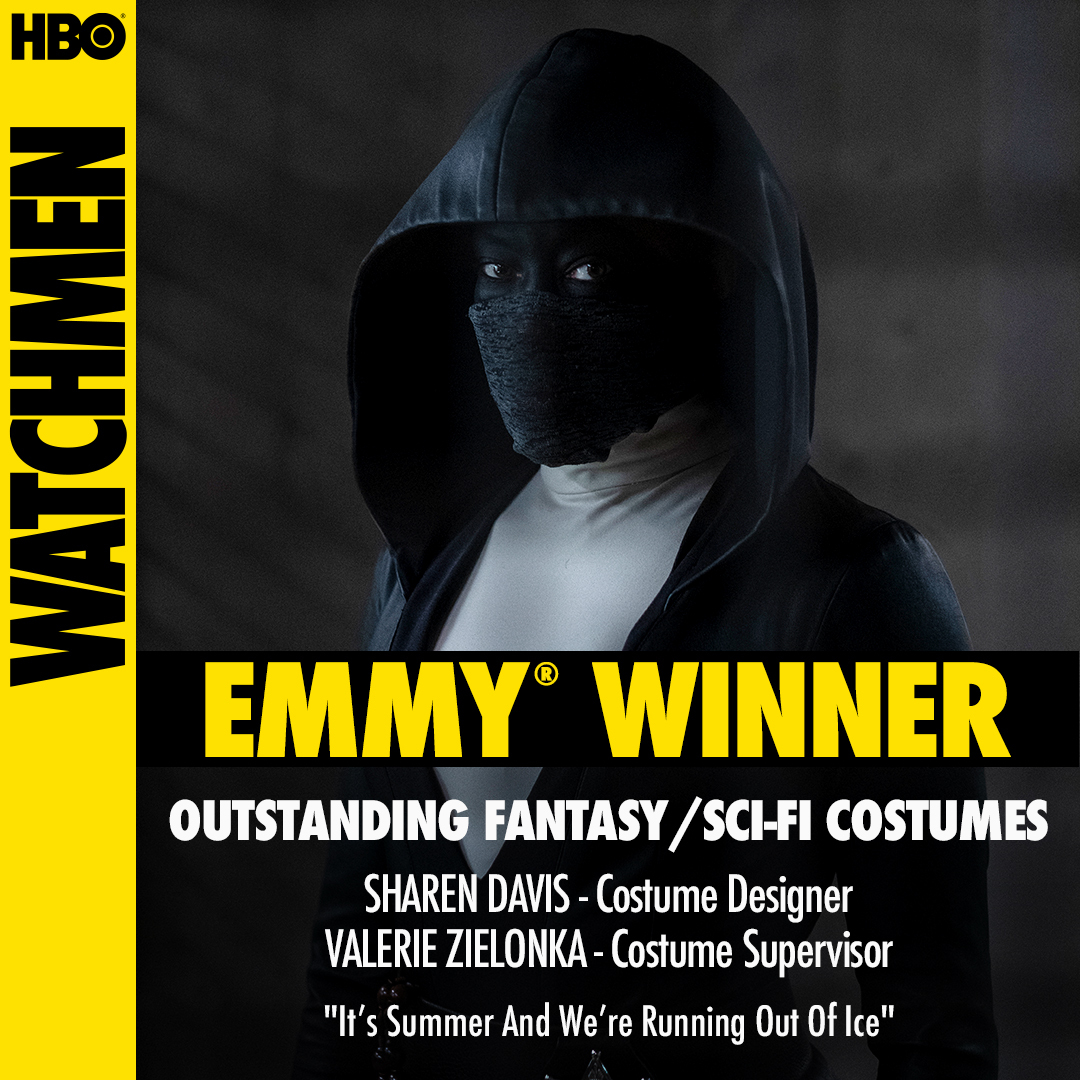 I wrote about the last category won by a person of color for their work in "Watchmen" in Star Trek vs. Star Wars — futuristic politics and government at the Creative Arts Emmy Awards.

I think "The Mandalorian" should be happy just to be nominated, even though it's competing in a open field with "Game of Thrones" over. It's competing against three-time nominee "The Handmaid's Tale" and former nominee "Westworld." The track record favors "The Handmaid's Tale" but I thought the costumes in "Westworld" this season were spectacular. The costumes in "Carnival Row" were no slouch, either, as they were both fantastical and historical, taking place in an alternative timeline during the late Victorian and Edwardian eras, making them the kind of clothes Emmy voters might drool over. That written, I think all of them will lose to "Watchmen." I wouldn't be the least bit upset if that happens.

The team from Watchmen wins the Emmy for Outstanding Fantasy/Sci-Fi Costumes.

Costume designer Sharen Davis tied this section together by not only name-checking most of the winners, but also thanked "HBO for telling the stories not told in our history books." "Watchmen" certainly did. 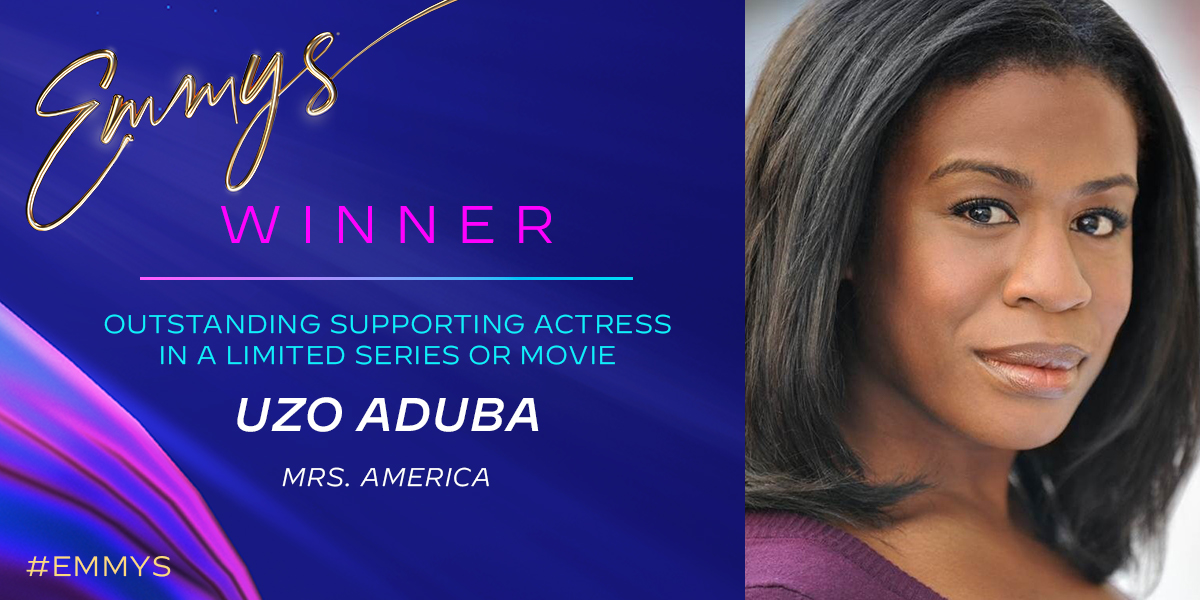 Now for the final category won by a person of color for a Limited Series or Movie.

Outstanding Supporting Actress in a Limited Series or Movie

The very political "Mrs. America" has three nominees, Uzo Aduba as Shirley Chisholm, Margo Martindale as Bella Abzug, and Tracey Ullman as Betty Friedan. I suspect they will split the vote and let either Jean Smart as Laurie Blake win, just as she did at the Critics' Choice Awards or Toni Collette win, as she did at the Gold Derby Awards. For what it's worth, Collette wasn't even nominated at the TCA Awards; her co-stars were. Between the two, I want Smart to win. Let's hope I'm right.

Uzo Aduba wins the Emmy for Outstanding Supporting Actress in a Limited Series or Movie.

Aduba, who won for "Mrs. America," wore a shirt with Breonna Taylor's name on it. Between her and King, she had that covered. She also acknowledged the efforts of Shirley Chisholm, who she played, and told the audience "Let's go out and change the world." Amen to that and congratulations!

Before I leave, I want to acknowledge the rest of the winners in the Limited Series and Television Movie categories. First, "Bad Education," my personal preference for Outstanding Television Movie, won its category, Mark Ruffalo won Outstanding Lead Actor in a Limited Series for his role in "I Know This Much Is True," and Maria Schrader won Outstanding Directing for a Limited Series, Movie or Dramatic Special for "Unorthodox." Second, all the other winners of color I haven't already recognized will get at least one entry. Next Sunday is taken (see the footnote), but the Sunday after that and all the Sundays during February, which is Black History Month, are open. I'll get to them, I promise.

*The Series nominees for the 26th annual Critics Choice Awards, which were announced today, are the exception. I plan on covering them for the next Sunday entertainment feature. Stay tuned.

Previous posts about the 2020 Primetime and Creative Arts Emmy Awards
Posted by Pinku-Sensei at 5:53 PM