Politics, government, and injustice among the 2021 feature documentary Oscar nominees 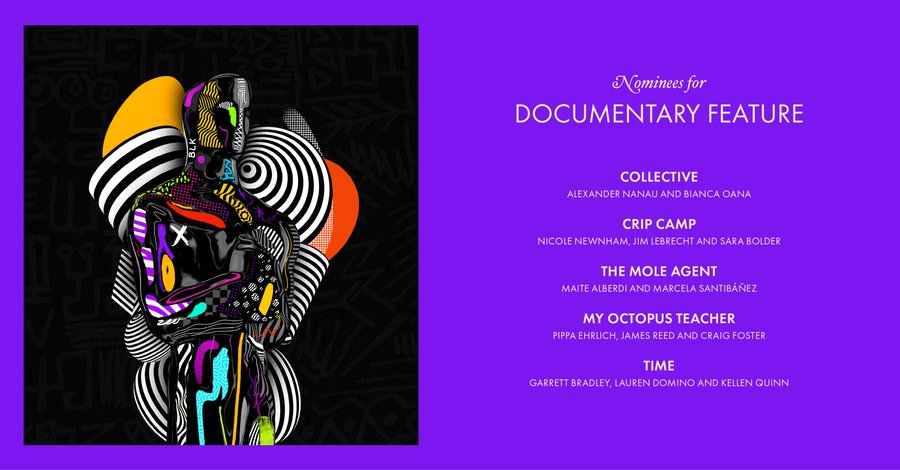 Barack and Michelle Obama, whose Higher Ground backed last year's documentary winner American Factory, will look to repeat history with Crip Camp. The film, about a 1970s summer oasis for the disabled, will vie against Time as well as The Mole Agent, My Octopus Teacher and The Collective. But not all politicians turned producers walked away with a doc nomination. Stacey Abrams, who executive produced and is the star subject of All In: The Fight for Democracy, didn’t make the cut despite being shortlisted. The Collective, which hails from Romania, also picked up a nomination in the foreign-language category, repeating a feat done by last year’s Honeyland.
...
Meanwhile, the deep-pocketed Apple finally crashed the Academy party, landing its first-ever nominations for best animated feature (Wolfwalkers) and best sound (Greyhound), even if its doc Boys State, which was widely expected to receive a mention, was passed over.

I already wrote about two of the nominees, "Crip Camp" and "My Octopus Teacher," last November, so my readers can click on the links to those entries and I'll move on the other nominees, beginning with Collective - Official Trailer.

In 2015, a fire at Bucharest’s Colectiv club leaves 27 dead and 180 injured. Soon, more burn victims begin dying in hospitals from wounds that were not life-threatening. Then a doctor blows the whistle to a team of investigative journalists. One revelation leads to another as the journalists start to uncover vast health care fraud. When a new health minister is appointed, he offers unprecedented access to his efforts to reform the corrupt system but also to the obstacles he faces. Following journalists, whistle-blowers, burn victims, and government officials, Collective is an uncompromising look at the impact of investigative journalism at its best.

Wow! That's quite a powerful trailer! I can see why this movie earned a second nomination for Best International Feature.* The footage and the video description show that "Collective" is a very political documentary, depicting injustice because of governmental failure, so it fits the themes of poltics and government that I'm featuring in today's post.

The next nominee in this category is "Time." Here's the official trailer from Amazon.

Fox Rich is a fighter. The entrepreneur, abolitionist and mother of six boys has spent the last two decades campaigning for the release of her husband, Rob G. Rich, who is serving a 60-year sentence for a robbery they both committed in the early 90s in a moment of desperation. Combining the video diaries Fox has recorded for Rob over the years with intimate glimpses of her present-day life, director Garrett Bradley paints a mesmerizing portrait of the resilience and radical love necessary to prevail over the endless separations of the country’s prison-industrial complex.

The trailer for "Time" is even more moving than that for "Collective," but here the injustice is because of government in the form of the criminal justice system working at first, then not responding.

When a family grows concerned for their mother’s well-being in a retirement home, private investigator Romulo hires 83-year-old Sergio to pose as a new resident and undercover spy inside the facility. The Mole Agent follows Sergio as he struggles to balance his assignment with his increasing involvement in the lives of the many residents he meets.

This looks to be the most entertaining of all the documentary nominees, but while it has an investigation at its core, like "Collective," that seems to be a MacGuffin. Instead, the trailer makes it look like a real-life workplace comedy with the emphasis on Sergio's relationships with the other residents and staff. Unless the national government of Chile, where this takes place, or a municipality in the country runs the nursing home, then there is no government or politics involved.

While "The Mole Agent" is the most fun movie of the bunch and the trailer makes it look like the best crafted using scripted movie techniques, I think it explores the least weighty issues. In contrast, "Time" and "Crip Camp" also examine relationships, have eventually uplifting stories, and weighty examinations of government. In its own way, so does "My Octopus Teacher," which is surprisingly popular. On the other hand, there seems to be very little uplifting about "Collective," as substantial and well-made a work about politics, government, and journalism as it is. That may impede its chances with an electorate that voted for "20 Feet from Stardom" over more substantial nominees in 2014. Then again, "Collective" beat "Crip Camp" for Best Motion Picture, Documentary at the Satellite Awards, while the reverse happened at the International Documentary Association and Garrett Bradley won Best Director for "Time." As I keep repeating when I write about awards shows, electorates matter.

I'll return with more about the nominees. In the meantime, stay tuned for a celebration of Holi.

*The second nomination of "The Collective" is a sign of quality, although I think "Another Round" is the favorite to win Best International Feature Film. On the other hand, "The Mole Agent" could have been nominated in this category, but wasn't. That says something.
Posted by Pinku-Sensei at 3:34 PM