FiveThirtyEight asks 'Will We See More Celebrities Run For Office In 2022?' 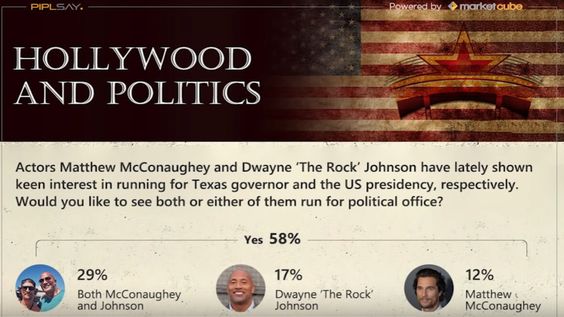 It’s another episode of Confidence Interval, where we make a persuasive case for a hot take we’ve been hearing … and then reveal how confident we really feel about the idea. This time, we talk about celebrity politicians. FiveThirtyEight politics reporter Alex Samuels explains the rise in the number of celebrities running for political office and argues whether or not they will be successful.

As one of the commenters snarked, I'd bet $20 on the confidence interval response being "I'd bet $20 on this," as it has probably been a more common response than "it makes sense" or "meh." More seriously, celebrities running for office happens often enough to be worth noting. As Alex Samuels mentioned, Caitlyn Jenner is running for Governor of California in the upcoming recall election and Andrew Yang, arguably a celebrity, is running for Mayor of New York City. On the other hand, some candidacies end up being mere publicity stunts, such as Kid Rock for U.S. Senate. That's what I think Dwayne "The Rock" Johnson is doing. Matthew McConaughey seems to be more serious, but I don't think he'll get very far if Beto O'Rourke runs for Texas Governor.


The former Texas congressman says he hasn't ruled anything out.
I think Beto will push McConaughey out of the Democratic primary should he run, leaving McConaughey to try to win the Republican primary (good luck with that), mount an independent bid, or drop out and enjoy the free publicity. I'd bet $20 on the last option.

For more on this subject, read Samuel's article Why Americans Can’t Resist A Celebrity Political Candidate on FiveThirtyEight's website. In the meantime, enjoy your Sunday!
Posted by Pinku-Sensei at 11:06 AM