Happy International Asteroid Day! I'm observing the younger but more established version of Apophis Day by updating NASA's plans to deflect an asteroid plus what happens if one hits NYC, beginning with PBS NOVA asking Can Humans Deflect an Asteroid? New NASA Mission Aims to Find Out.

NASA’s new spacecraft mission DART will test scientists’ ability to deflect asteroids at risk of colliding with Earth and is scheduled to launch later this year, NASA wrote in an April press release.

Sixty-six million years ago, a miles-wide asteroid crashed into Earth, wiping out three-quarters of the world’s plant and animal species, including all non-avian dinosaurs. (The occurrence is now known as the Cretaceous-Paleogene, or K-Pg, event.) And on Jun. 30, 1908, an asteroid streaked over the Siberian sky and exploded, flattening about 80 million trees over an area of 830 square miles of forest and, according to eyewitnesses, killing at least three people. Called the Tunguska event, it’s the most harmful known asteroid-related incident on Earth in recent history.

Today, Space agencies including NASA are confident they’re tracking asteroids big enough to cause a major extinction event. Fortunately, none are headed our way in the foreseeable future. But following asteroids—and learning how to redirect them away from Earth—is important, NASA’s Planetary Defense Coordination Office, which was founded in 2016, believes.

Watch to discover how the Planetary Defense team is taking on this challenge.

That's the latest update on a plan I've been following for years as it comes closer to fruition. NASA scheduled a livestream on YouTube at 1:00 P.M. EDT. I am posting this entry before it starts, but the video of the livestream should still be available to watch after it's over.

Next, SciShow Space reported on the 2019 conference I included in the May 2019 post as The Imaginary Future Asteroid That Hit NYC.

Last week, an asteroid impact drill was conducted, which demonstrated what might happen if an asteroid hit us within the decade. It didn't go quite as well as we would like.

Since USA Today took down the video I embedded two years ago, it's a good thing I found this video and shared it here. 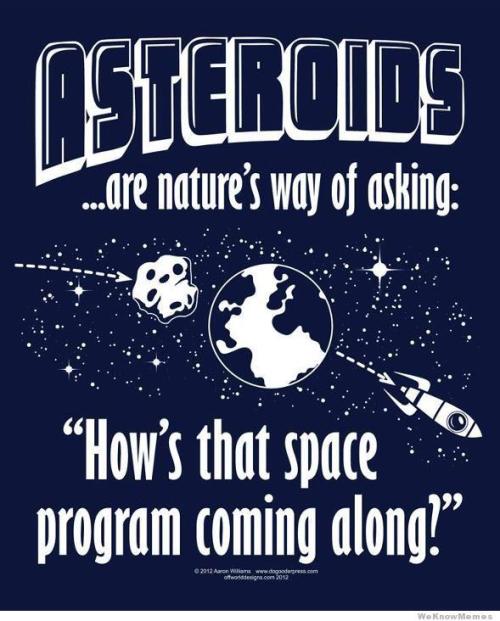