I foreshadowed today's topic in the conclusion of WOOD-TV provides a Michigan perspective on the JBS cyberattack.

I expect I will have a pandemic update first, as the prediction of 600,000 dead in the U.S. from COVID-19 by June 1, 2021 will likely be only a few days off. I expect the country will pass that grim milestone by the end of today.

That happened as NBC News reported Covid has claimed more than 600,000 lives in United States on the night of June 3.

More than 600,000 people have died from Covid-19 in the United States, a grim reminder that even though cases are down as more people are vaccinated, the pandemic is not over.

As of Thursday evening, the country had seen at least 600,040 Covid-19 deaths, according to a count of reports by NBC News. More than 33.4 million cases have been recorded in the U.S.

The Centers for Disease Control and Prevention said in a summary late last week that the numbers of cases and deaths had dropped to their lowest levels in almost a year.

The agency said at the time that the number of tests that came back positive for the disease over the previous seven days was below 3 percent, one of the lowest rates since widespread testing began.

The CDC's latest graph of new cases shows that drop. 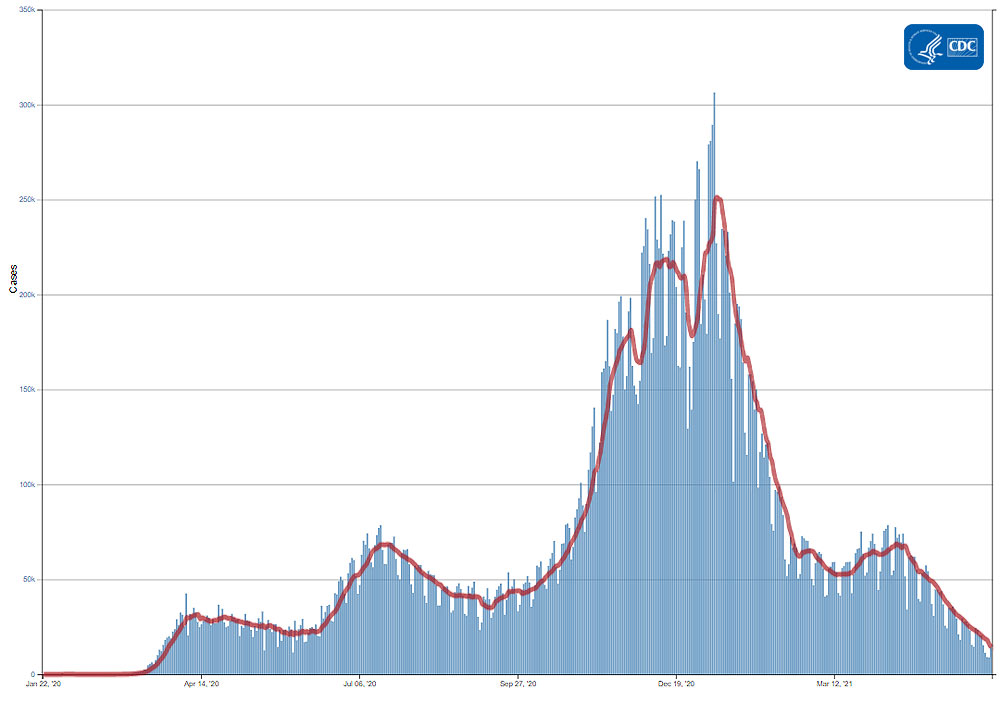 The good news continued with vaccinations.

More than 136 million people in the U.S. — around 41 percent of the population — have been fully vaccinated, according to the CDC.

That good news opened MSNBC's Dr. Fauci: The Covid-19 Pandemic ‘Isn’t Over Yet’ the night before.

Dr. Anthony Fauci urges all Americans to get their Covid-19 vaccine to stop the spread of potential variants and to allow the country to fully reopen. He also reacts to the publication of his emails during the early months of the coronavirus crisis.

I second all of Fauci's answers. Working from the end to the beginning, I think he gave the right response to criticism of his emails, that science is a self-correcting process to get to the truth and that as the state of knowledge improves, so will the advice based on it. This includes getting vaccinated as the vaccines are effective against the current variants. Finally, the pandemic may be receding, but it's far from over. CNBC got that answer when it asked Is it too soon to declare the Covid pandemic over? Follow over the jump to watch that video and others where CNBC interviews Former FDA Commissioner Dr. Scott Gottlieb.

Former FDA Commissioner Dr. Scott Gottlieb on what the U.S. can expect over the rest of the summer and into the fall as more and more people get vaccinated against the coronavirus.

In addition to adding more details about likely course of the pandemic and the effectiveness of the vaccines, Gottlieb gave an important warning about flu, since there was essentially no flu season this past winter because the protocols to reduce COVID-19 transmission worked even better against flu. We might have a worse flu season this coming winter than normal. Think of it as an outcome of "everything is connected to everything else" and "there is no free lunch."

Former FDA commissioner Dr. Scott Gottlieb joins ‘The News with Shepard Smith’ to discuss the CDC reporting a spike in adolescent Covid-19 hospitalizations, saying it's a reflection of new variants of the virus. He also discusses mask mandates in schools and camps, as well as Covid's origins.

First Fauci's emails and now the Wuhan lab-leak hypothesis, two narratives that I want to give as little attention to as possible. Still, I have to pay some attention to them, if only in the spirit of "keep your friends close and your enemies closer."

I may relay some more good economic news about recovery from the pandemic later this week. In the meantime, stay tuned for this year's celebration of World Oceans Day.
Posted by Pinku-Sensei at 11:45 AM