Today is the first Sunday after the first full moon after the Summer Solstice, so it's Souther, a holiday created by John Michael Greer and entrusted to me. He also designated the wombat as the animal mascot for the holiday. Since the first celebration fell on National Ice Cream Day and the holiday usually happens during July, which is National Ice Cream Month, the activity to celebrate the day is eating ice cream.

I almost couldn't believe the song being released after I paired the wombat with the activity, as I told Greer two years ago.

A belated Happy Souther to you! When you first suggested the day and its wombat mascot, I wondered what the wombat would do on its day. Well, the first Souther fell on National Ice Cream Day, so the mascot would eat ice cream. This year's fell on National Ice Cream Day as well and I found a song for it. Last year, a band called The Wombats recorded a song with the title of "Ice Cream," which is now the theme song for the holiday. I couldn't have asked for a more fortuitous piece of music.

I'd have used it last year, but the cable carrying broadband to my house came loose, so I had to post using my smartphone with text only, no links, images, or videos. Sigh.

Moving from the band to its namesake animal, Bizarre Beasts uploaded How The Wombat Poops Cubes earlier this month, which I saved for today.

Wombats are chubby, adorable Australian marsupials with a lot of great adaptations for their specific environment and lifestyle, and that includes pooping little cubes.

I couldn't resist the science lesson, even if today is about what goes into wombats, not what comes out.

Follow over the jump for a younger, if more widely known national day.

National Ice Cream Cake Day on June 27th each year brings two celebration favorites together under one delicious treat! And in the height of summer, an ice cream cake creates the perfect dessert for just about any occasion.

Ice cream cake makers build these treats out of any flavor of ice cream into the shape of a cake. And they can add many different ingredients, too. Whether you like cookie crumbs, sponge cake, fudge, fruit, or caramel between the layers, they make delicious things happen. Then they take it a step further with the decorating. They begin by adding frosting, whipped cream, or icing. Just like baked cakes, ice cream cakes are decorated to fit any theme or celebration.

Although the origin of the ice cream cake remains somewhat of a mystery, there’s no doubting this popular dessert combines two classics. Between the classic summer treat, ice cream, and the time-honored celebratory cake, the ice cream cake becomes one of culinary history’s favorite combinations.

Yes, today would still be about eating ice cream, even if Greer hadn't come up with Souther and I hadn't made eating ice cream the activity for today. Speaking of which...

Reading this reminded me that my son didn't like cake growing up, but he loved ice cream, so his mother, my ex-wife, and I would buy him an ice cream cake from Baskin Robbins for his birthday. He happily blew out the candles and ate a slice of that.

When I first celebrated Souther and made ice cream the food of the day, I examined how well the pairing would last.

That was in 2017. Now, look at the date for the creation of National Ice Cream Cake Day.

On June 22, 2018, the Registrar at National Day Calendar proclaimed celebration to be observed on June 27th annually.

I decide to pair up wombats and ice cream in 2017 and the next year The Wombats release "Ice Cream" and National Day Calendar recognized National Ice Cream Cake Day. I worried four years ago that today wouldn't have an ice cream celebration separate from Souther, but by the time it rolls around, the ice cream celebration is waiting for it. That's spooky, if fortunate.

I had that reaction to The Wombats recording "Ice Cream," asking Greer "now I'm wondering if the two of us performed some kind of working, making this an example of TSW?" Greer responded cautiously, but didn't dismiss the idea: "It’s anyone’s guess, but stranger things have happened. If the Wester (sic, Souther — the Wester mascot is the squirrel) mascot gets unusual publicity in turn, yeah, something may be afoot." Now I'm wondering when the cartoon of the wombat with an ice cream cone that I used as the preview of the 2019 entry was created. I wouldn't be surprised if it was 2018. 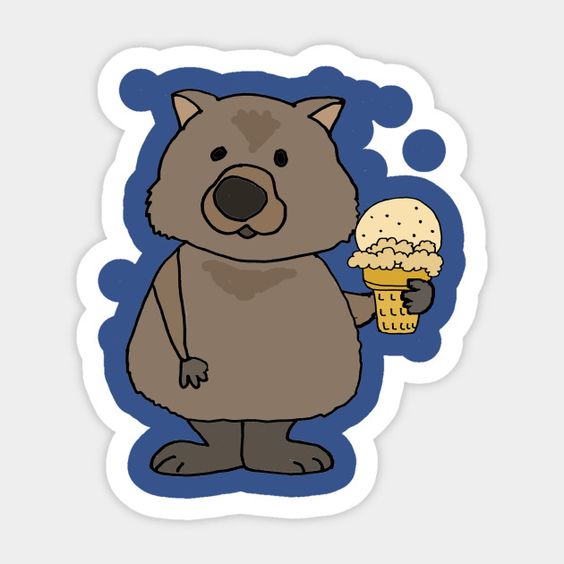 By the way, Souther will return next year to National Ice Cream Day, which will fall on July 17, 2022. The connection continues!
Posted by Pinku-Sensei at 12:33 PM