I'm not done with Stephen Colbert on the insurrection one year later. Stephen began Biden Takes The Gloves Off, Tears Into The Former President For Inciting Jan. 6th Riot by telling the story behind his monologue about the attempted self-coup, the fourth most read entry posted during the tenth year of this blog.

One year after a violent mob ransacked the U.S. Capitol, Stephen looks back at The Late Show's spontaneous live episode from that night, and listens as President Biden blames the former president without mentioning him by name. #Colbert #Comedy #Monologue

The show began with a musical cold open for the occasion, Abhor-Rent: 525,600 Minutes Since The Insurrection.

A surprisingly light look back at one of America's darkest days.

"Like Mussolini but dumb" reminds me of the image I used to illustrate Kunstler said Americans would elect maniacs. 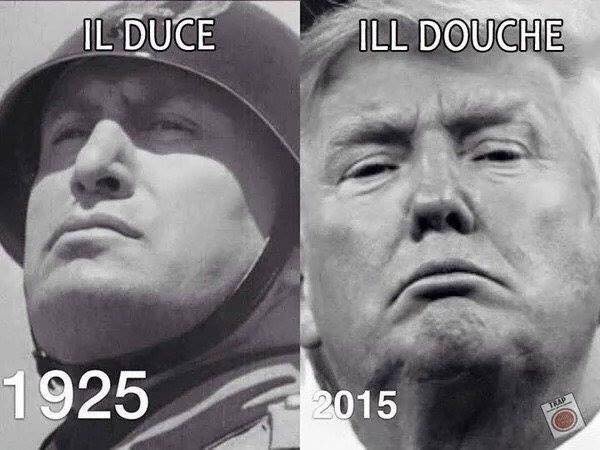 We take a look back at where we were just one year ago today in a special edition of “This Week in January 6th History.”

January 6th is also the 28th anniversary of the attack on Nancy Kerrigan? I'd say "welcome to Detroit, where the weak are killed and eaten" except that the people involved were from Oregon and would likely have perpetrated the assault wherever the location of the U.S. Figure Skating Championships. In 1994, it just happened to be in Detroit. Not our fault.

Speaking of "not our fault," trying to blame the attack on Antifa reminds me that Projection is the Right's favorite defense mechanism. That's even more true nine years after I wrote it.

I conclude with "The Daily Show with Trevor Noah," which asked The January 6th Insurrectionists: Where Are They Now?

It’s been a year since the infamous insurrection at the Capitol… what are these rioters up to nowadays?

The answer is serving time or awaiting justice for the people who actually entered the Capitol illegally, but no legal consequences so far for the politicians. Worse yet, I agree that The Former Guy is plotting his return to power, legitimate or not. I am not looking forward to 2024.

Stay tuned for a two-part post about the Golden Globes, despite the scandal that forced it off television this year.
Posted by Pinku-Sensei at 10:10 AM