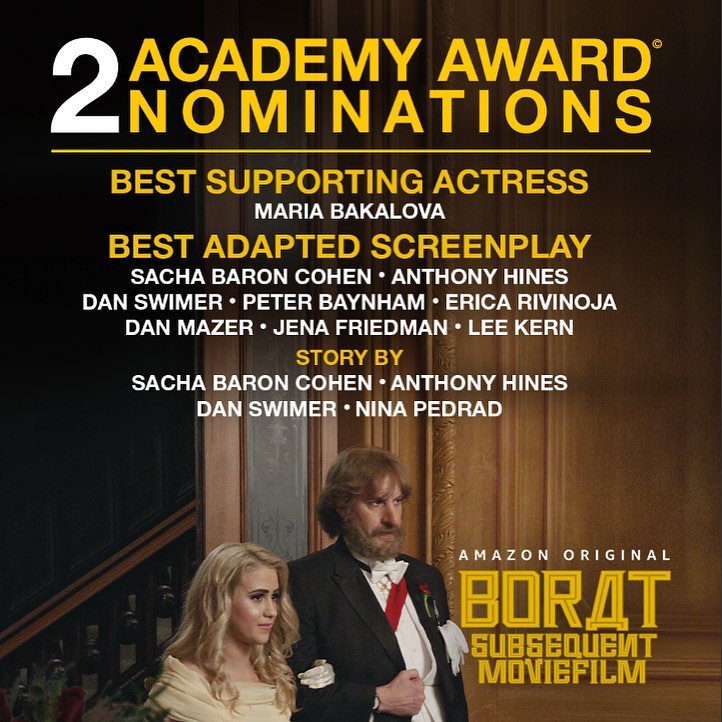 I observed that "Without doubt, 'Borat Subsequent Moviefilm' is the best movie of the bunch with two Oscar nominations, two Golden Globe wins, and more than 80 other wins and nominations" when I wrote about the movie's two Razzie nominations. It's time for me to cover those nominations and wins, which I promised to do when I reviewed the feature documentary nominees at the 2021 Academy Awards, so I'm offering this entry as another installment payment on that promise to cover the nominees about politics and government. 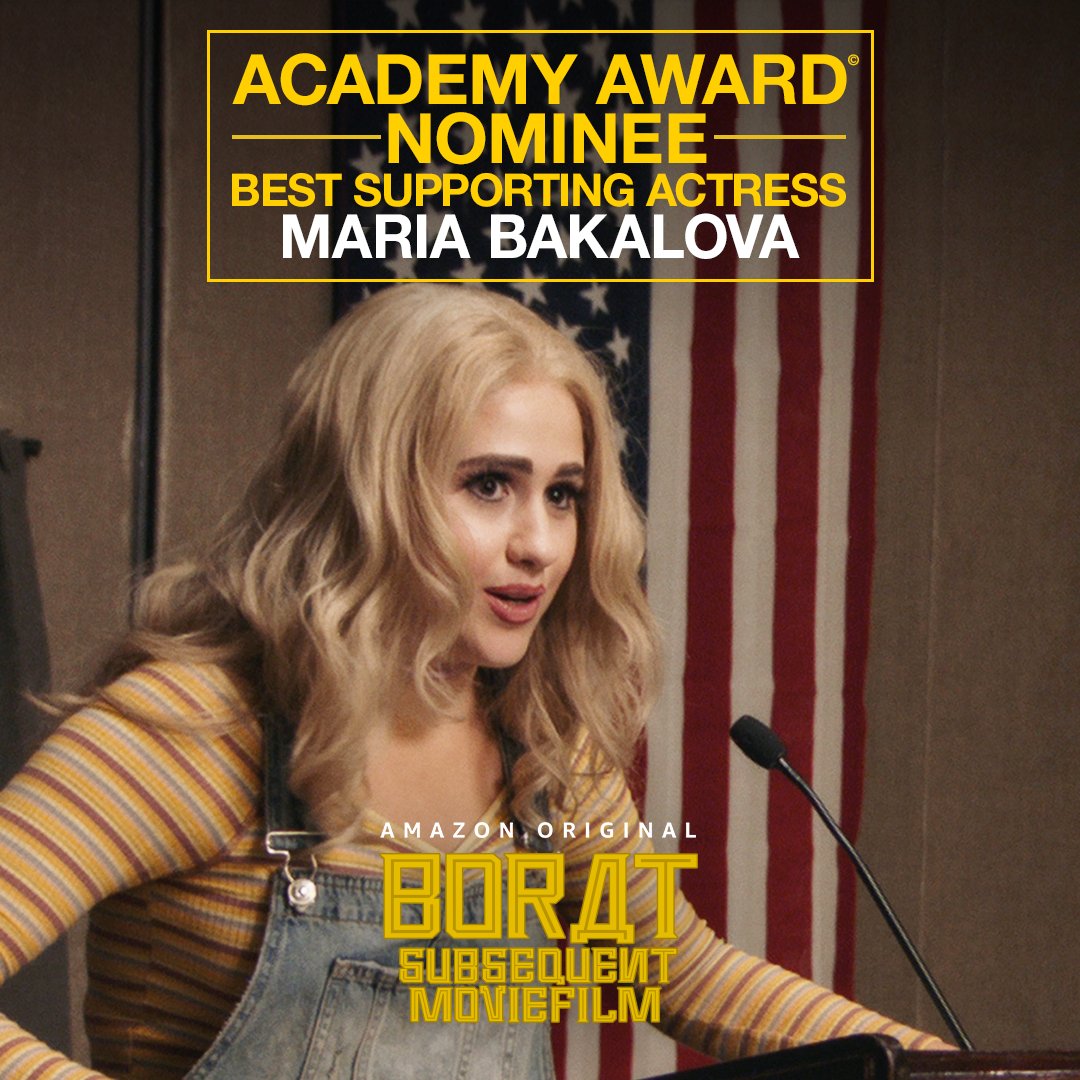 I begin with Maria Bakalova, who earned an Oscar nomination for Best Supporting Actress. She's competing against Glenn Close for "Hillbilly Elegy," Olivia Colman for "The Father," Amanda Seyfried for "Mank," and Youn Yuh-jung for "Minari." I'm going to begin my commentary by being a good environmentalist and recycling what I wrote for Politics, government, and diversity in movie nominees at the 2021 Critics Choice Awards.

This is probably the least diverse field of nominees at these awards, with Yuh-Jung Youn from "Minari" as the only actress of color. Youn still makes this a more diverse field than the equivalent one at the Golden Globes, about which I wrote the following.

The three biggest names in this field are Glenn Close, Olivia Colman, and [Ellen Burstyn]. Grace expressed her cynicism about the Hollywood Foreign Press Association when she said that Close and Colman would only win this award if the HFPA couldn't help themselves. On the other hand, she thought...Amanda Seyfried...deserved the award [and] wants Seyfried.

The CCA didn't nominate Jodie Foster from "The Mauritanian," so if I want to root for the nominee from the most political movie, I would have to root for Maria Bakalova from "Borat Subsequent Moviefilm." I'd rather join Grace and root for Seyfried, her only choice on her nominating ballot to receive a nomination.


Congratulations, Ms. Bakalova! I hope the Motion Picture Academy voters agree with the Critics Choice Association, but I'm not sure they will, as electorates matter. I know the Hollywood Foreign Press Association had other ideas, as I suspected when I wrote Politics, government, and diversity among movie nominees at the 2021 Golden Globes.

The two actresses Grace tagged as likely to win, Maria Bakalova and Rosamund Pike, happen to act in the movies most about politics and government. In addition to the mean-spirited political pranks in "Borat Subsequent Moviefilm," "I Care a Lot" is a crime caper, which means the police are involved. Of the two, I'm rooting for Pike. I've been a fan of hers since she starred in the Bond film "Die Another Day."

I got my wish; Pike won. Fortunately for Bakalova, she isn't competing against Pike or Jodie Foster, who won Best Performance by an Actress in a Supporting Role in a Motion Picture at the Golden Globes. Neither were nominated at the Oscars. She's still competing against a very tough field that includes Glenn Close, who has been nominated for eight Oscars but never won. Close might win on sentiment alone. If she does, it would be darkly hilarious if she also wins a Razzie for the same role the night before. 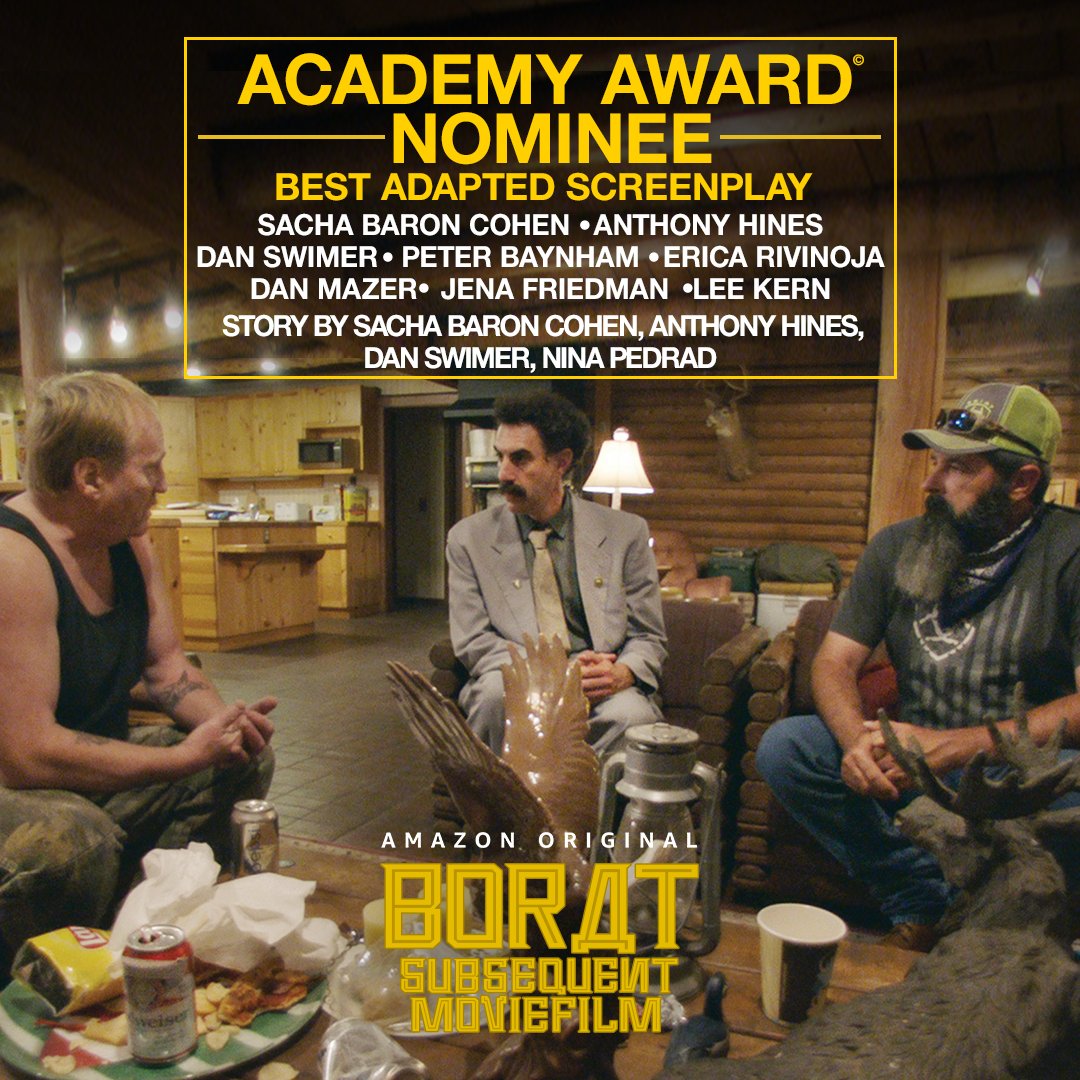 The other Oscar nomination for "Borat Subsequent Moviefilm" is for Best Adapted Screenplay, a category that also includes Christopher Hampton & Florian Zeller for "The Father," Chloé Zhao for "Nomadland," Kemp Powers for "One Night in Miami," and Ramin Bahrani for "The White Tiger." I can't use either the Golden Globes, where Aaron Sorkin won Best Screenplay for "The Trial of the Chicago Seven," or the Critics Choice Awards, where Chloé Zhao won for "Nomadland," for much guidance, as neither nominated Sacha Baron Cohen's screenplay. However, those electorates don't overlap with the Oscar electorate. The Writers Guild of America (WGA) includes Oscar voters, and there it won for Adapted Screenplay. Watch The 2021 Writers Guild Award for Adapted Screenplay goes to Borat Subsequent Moviefilm from WGA West.

Its only Razzie nominations are this one and the next, demonstrating how stupidly Giuliani acted naturally. I'll be a good environmentalist and recycle what I wrote last October about his performance and that of the star of the film.

Rudy [Giuliani] really should have known better. I think [Sacha] Baron Cohen is mean-spirited prankster who doesn't like American conservatives and he gives that side of him full rein when he's Borat. Mind you, I think he's also hilarious, but his wit has barbs and a sharp point that is aimed at his interview subjects, particularly ones like Rudy.

That written, I have no sympathy for Giuliani and hope he "wins."

The least Baron Cohen could do is thank Giuliani for making things easy for him.

On the other hand, winning this award will not be that easy. While winning the WGA Award (and having a lot of writers working with him, as Baron Cohen mentioned) makes me think "Borat Subsequent Moviefilm" is the favorite, I would not be the least bit surprised if the Golden Globe winner "Nomadland" pulls off an upset.

Follow over the jump for Baron Cohen's acceptance speeches at the Golden Globes.

Once again, I'm recycling, this time from Politics, government, and diversity among movie nominees at the 2021 Golden Globes.

"Borat Subsequent Moviefilm" has both the most nominations of any movie in this category, three, and the most current political content, including a really memorable prank on Rudy Giuliani. As Grace says, it could very likely win, as much as she thinks "The Prom" deserves it more. However, I'm rooting for the other political comedy or musical, "Hamilton," the winner of two People's Choice Awards. I predicted then that "I expect the show will be nominated for...a Golden Globe or two" and the HFPA proved me right.

Once again, Baron Cohen couldn't resist "thanking" Giuliani for the success of the film and milking him for more laughs. Still, he did manage to make a serious statement about why he made his comedy and the message he wanted to send, a message that I agree with.

Allow me this recycled side trip before I continue to the other Golden Globe for "Borat Subsequent Moviefilm."

"Palm Springs" managed to win Best Comedy at the Critics Choice Awards, so the critics generally like it, even if Grace Randolph doesn't. It also earned a nomination at the Saturn Awards for Best Independent Film Release. I might even vote for it.

Speaking of Grace, I'm recycling another reaction to her opinion about Best Actor in a Motion Picture, Musical or Comedy.

Grace just can't hide her disappointment with this field, but she settles on Sacha Baron Cohen as the likely winner. I'm personally rooting for Lin-Manuel Miranda as Alexander Hamilton so he can have a Golden Globe to go along with his People's Choice Award, but I learned long ago not to count out James Corden. The man has talent.

Once again, my head, which agreed with Grace, picked the winner, not my heart. Watch Sacha Baron Cohen: Best Actor in a Motion Picture, Musical or Comedy - 2021 Golden Globes from NBC.

Sacha Baron Cohen wins the award for Best Performance by an Actor in a Motion Picture, Musical or Comedy, for Borat Subsequent Moviefilm at the 78th annual Golden Globe Awards.

I was wondering when Baron Cohen would mention former President Donald Trump.

Congratulations to Baron Cohen for his wins at the Golden Globes and WGA Awards and to Bakalova for her win at the Critics Choice Awards and good luck break a leg to both of them at the Oscars!

I have more to say about the other Oscar nominees that examine politics and government, so stay tuned.
Posted by Pinku-Sensei at 1:51 PM