Happy Mother's Day! My post celebrating the day is exactly what I predicted it would be yesterday, when I wrote "stay tuned for the Sunday entertainment feature, which will probably be the highlights of tonight's 'Saturday Night Live' for Mother's Day. That should be fun, although I expect the leaked draft Supreme Court opinion that would overturn Roe v. Wade will be a major topic." It sure was. Watch Roe v. Wade Cold Open to see them mock the antiquity of one of Justice Alito's authorities in his draft opinion.

This sketch follows in the grand tradition of Steve Martin's Theodoric of York, Medieval Barber, which mocked the backwardness of the Middle Ages. Yes, I'm old enough to remember that character. Just the same, the concept works. See, I'm not the only person who recycles an idea when its appropriate.

"Tomorrow is Mother's Day, whether you want it to be or not." That's exactly the joke I was expecting and SNL's writers wasted not time delivering it. As for the quip about Vladimir Putin and cancer, I'll let Andre 3000 reply for me.

"Unless I'm missing something about class in America." McKinnon's version of Justice Barrett certainly is. She and the rest of the segments about the draft opinion remind me of what I wrote in John Oliver examines the Supreme Court after 'Last Week Tonight' wins four Emmy Awards, mentioning "all the bad things that can happen to health care, reproductive rights, civil rights, and voting rights as a result of this nomination..." If Alito's draft becomes the majority opinion, then bad things will have happened to health care, reproductive rights, and civil rights all at once. This will become one of those times when I wish the comedians and I weren't right.

Enough of what is likely to happen to Roe v. Wade. Follow over the jump for two segments about Mother's Day and the conclusion to Weekend Update.

Second-time host Benedict Cumberbatch takes a moment to wish his mother and his wife a happy Mother's Day.

That was sweet, which is more than I can say for the next segment, Mother's Day Gifts.

I'm glad that sketch paid off. I was worried about halfway through that it wouldn't.

As I've noted before, Weekend Update has enough entertainment news to justify using it for the Sunday entertainment feature and this segment is no exception. 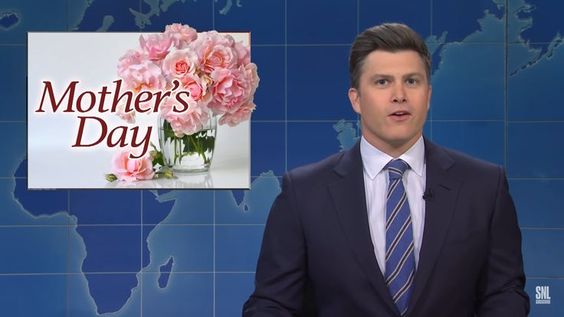