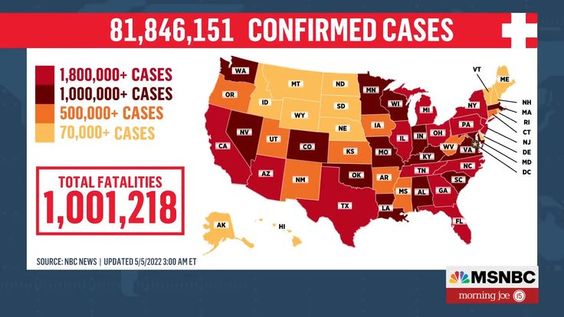 It's time for a grim update to the U.S. passing 900,000 dead from COVID-19 this past February, MSNBC reporting U.S. Tops One Million Covid-19 Deaths.

The U.S. on Wednesday surpassed 1 million Covid-19 deaths, according to data compiled by NBC News. The Morning Joe panel discusses.

Normally, I'd place this second or third as commentary on the news, but it included the graphic I used to illustrate this entry, so I put it first. Besides, Joe, Mika, and crew followed up on the White House Correspondents Dinner, which Trevor Noah called "a superspreader event" and asked if the reporters there even read their own papers and watched their own news. Joe made the same observation and, despite everyone attending being vaccinated and boosted while testing negative, noted how many attendees came down ill. The BA.2 strain of the Omicron varient is that infectious.

The U.S. has surpassed 1 million Covid deaths. It's a number that forces us to confront tough questions, like how many of those could have been prevented. It "shakes our consciousness, demands our attention, forces us to pause and consider who and what we have lost," Lester Holt says.

Holt and his writers are noting the ironic, even perverse juxtaposition of the U.S. relaxing safeguards at the same time it passed 1 million dead from this disease. They confessed that they didn't consider "the unpredictability of free will, distrust in science, and simple human behavior." All those put the lie in my hope based on life imitating art that I first wrote in CDC offering zombie apocalypse tips updates 'Zombie Apocalypse Index for Day of the (Walking) Dead,' the top post of the tenth year of Crazy Eddie's Motie News for Throwback Thursday and repeated in 'Contagion' vs. COVID-19 updates last year's most commented entries on Throwback Thursday.

By the way, the movie ended with people receiving the vaccine. That's a good sign, as my wife and I got our first shots today. The horror movie is almost over for us.

I hope that's really true, not just for my wife and me, but also for my readers.

Nope, the horror movie continued, as 450,000 more Americans died from the pandemic since I wrote that. To repeat what I wrote in Two years of the COVID-19 pandemic in Michigan, "I'm finding people's responses to the pandemic, particularly the partisan reaction, to be more dispiriting than the isolation." About the only consolation I can gather from this grim statistic is that it took 15 weeks for 100,000 more bodies to pile up compared to six weeks between the U.S. passing 800,000 dead and 900,000 dead, so the rate is going in the right direction, but that's cold comfort.

This is a Detroit-based blog, so I'm closing with WDIV/Click On Detroit's US tops 1 million COVID deaths.

At least one million COVID-19 deaths have been recorded in the U.S. since the pandemic began, according to an official count by NBC News.

Remember that every death is a person who is missed.

I have lots more pandemic news, including global death estimates, but I will save those for the next pandemic update. In the meantime, stay tuned for the Sunday entertainment feature, which will probably be the highlights of tonight's "Saturday Night Live" for Mother's Day. That should be fun, although I expect the leaked draft Supreme Court opinion that would overturn Roe v. Wade will be a major topic.
Posted by Pinku-Sensei at 10:05 AM