After musing which way to cover President Trump testing positive for COVID-19 in a footnote to Seth Meyers and Samantha Bee weigh in with their closer looks at the first presidential debate, I then wrote "Maybe I'll do something else, like covering John Oliver's latest episode as an angle for his four Emmy wins." I decided to do that instead, particularly since no one made suggestions in comments.

Without any further ado, here is Last Week Tonight with John Oliver on The Supreme Court, the show's reaction to the passing of Ruth Bader Ginsburg and the rush to fill her seat with Amy Coney Barrett.

In the wake of Ruth Bader Ginsburg’s death, John Oliver discusses the future of the Supreme Court, why the government doesn’t always represent the political leanings of the electorate, and how those issues will impact the next generation of Americans.

In addition to all the bad things that can happen to health care, reproductive rights, civil rights, and voting rights as a result of this nomination, Oliver explained how the U.S. got here with an anti-democratic but pro-republican (double meaning intended) governing structure and what can be done to fix it. I'm in favor of all of them except maybe reforming the Senate. I don't think that's a bad idea in the abstract, but actually trying to do it will get the reformers stuck in the concrete (pun intended). It's difficult to the point of being almost impossible and will suck energy away from other reforms that are more attainable. On the other hand, eliminating the filibuster is worth doing, even if it's a double-edged sword. The National Popular Vote Interstate Compact is a work-around that will make the Electoral College more democratic, both upper- and lower-case d, without a constitutional amendment. I'd like that, too, but I consider it extremely difficult, while not impossible. That's a long-term effort that I may not live to see accomplished. Expanding the Supreme Court has its risks, but I'm not against it. Finally, anyone who has read my blog for any time knows I'm in favor of admitting Puerto Rico and Washington, D.C., as states.*

I'm sure I'll be writing more about Barrett's nomination between now and the end of the year. In the meantime, follow over the jump for my coverage of the four Emmy Awards won by "Last Week Tonight." 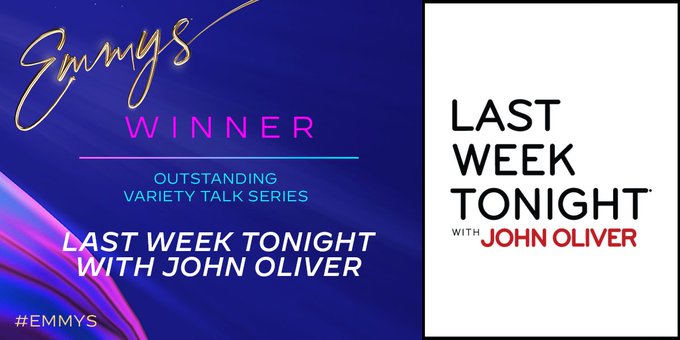 Here are the nominees and my comments on the likely winner from For National Presidential Joke Day, I present the variety talk show nominees at the Emmy Awards, beginning with the one presented at the Primetime Emmy Awards.

The favorite is "Last Week Tonight with John Oliver," which won four Emmy Awards last year and is the four-time returning winner in this category. It also has the most nominations this year, eight. Next comes "The Daily Show with Trevor Noah" with five, six counting "Between the Scenes," followed by "Full Frontal With Samantha Bee" with two, four if one counts her short form shows, putting her ahead of "The Late Show with Stephen Colbert" and "Jimmy Kimmel Live!" each with three and that last only if one counts Kimmel's short form spinoffs. As I wrote last year, "Last Week Tonight with John Oliver" leads variety talk shows in Emmy Awards nominations yet again.

The Television Academy showed the announcement of the winner and acceptance of the award in 72nd Emmy Awards: Last Week Tonight With John Oliver Wins for Outstanding Variety Talk Series. The presenter needs no introduction, but I'll tell you it's David Letterman anyway.


I enjoyed watching the mechanical hand come out of the glitter-bomb box to present the award and Oliver's reaction. I also thought showing the other hosts applauding from home with their boxes was a nice touch, even though Trevor Noah and Stephen Colbert were a bit salty about it. Oh, and Oliver's son saying talking about police brutality didn't sound like fun, he's right about that.

Oliver stuck around for Variety, who called their interview clip John Oliver Answers If He's Dedicating His Emmy Win to Danbury Connecticut.

After taking home his fifth Emmy win, the "Last Week Tonight" host answers all things about the new addition to his collection.

LOL, Danbury, Connecticut. I might have to explain that but I'd rather move on to the categories honored at the Creative Arts Emmy Awards.

"Last Week Tonight with John Oliver" is the returning winner in this category and has won it four years in a row, so I consider it the favorite.

The team from Last Week Tonight with John Oliver wins the Emmy for Outstanding Writing for a Variety Series.

That whole segment was hilarious, if dark, including the presenter, the featured clips, and Oliver's acceptance speech.

Just as it has for Outstanding Variety Talk Series and Outstanding Writing for a Variety Series, "Last Week Tonight" has won this four years in a row, so it's the favorite. My only concern is that its two nominations might split the vote and let another nominees slip past.

The team from Last Week Tonight with John Oliver wins the Emmy for Outstanding Picture Editing for Variety Programming.

The team from Last Week Tonight with John Oliver wins the Emmy for Outstanding Technical Direction, Camerawork, Video Control for a Series.

"Eat Sh!t Bob" won again. The song may have lost, but the video work for it won twice against very stiff competition. Congratulations to "Last Week Tonight" for repeating its wins in all four categories!

*A reform Oliver didn't mention was repealing the Permanent Reapportionment Act of 1929 and replacing it with a new allocation that would make all congressional districts represent as many people as the state with the smallest population, which is currently Wyoming. That would make the Electoral College more democratic. It would also be easier than eliminating the Electoral College and less jury-rigged than the National Popular Vote Interstate Compact.

Previous posts about the 2020 Primetime and Creative Arts Emmy Awards
Posted by Pinku-Sensei at 1:45 PM