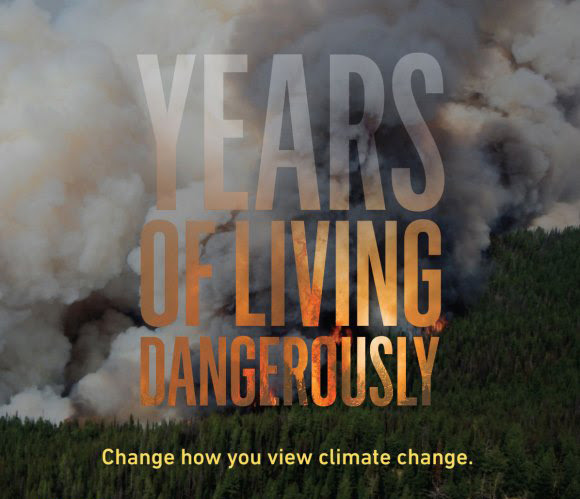 While I was featuring Neil DeGrasse Tyson on Late Night for Apophis Day to mark the showings of "Cosmos" last week, another media event even more appropriate for my Sunday night collapse-and-decline-related entertainment entries was taking place, the premiere of "Years of Living Dangerously."  Here's the second trailer for the series.

Don't miss the documentary series premiere of Years of Living Dangerously, Sunday, April 13th at 10PM ET/PT.
...
It's the biggest story of our time. Hollywood's brightest stars and today's most respected journalists explore the issues of climate change and bring you intimate accounts of triumph and tragedy. YEARS OF LIVING DANGEROUSLY takes you directly to the heart of the matter in this awe-inspiring and cinematic documentary series event from Executive Producers James Cameron, Jerry Weintraub and Arnold Schwarzenegger.

The entire first episode is available for free on YouTube.  Watch it there.

I knew of the show because of the following press release from Texas Tech: Climate Scientist to Appear with Don Cheadle on Showtime written by John Davis on April 4, 2014.

Katharine Hayhoe will discuss findings in premier of "Years of Living Dangerously."

A Texas Tech university climate scientist will appear with Academy Award nominee Don Cheadle in a new nine-episode Showtime documentary series covering climate change and its effect on people around the globe.

Katharine Hayhoe, director of the Climate Science Center at Texas Tech University, will discuss her climate findings with Cheadle, who serves as a U.N. Ambassador for the United Nations Environment Programme, during the premier episode at 9 p.m. (CDT) April 13 on the Showtime cable network.

On April 7, viewers can catch the full first episode of Years of Living Dangerously free at http://yearsoflivingdangerously.com/where-to-watch/.

“I hope this program will show us how climate change isn’t just some far-off issue that only matters to our children’s children, the polar bears in the Arctic or to islanders in the South Seas,” Hayhoe said. “Climate change is already affecting our lives today right here in the places where we live. It’s changing the birds, bugs and plants we see in our backyards. It’s affecting where we grow our food and how much water we have, altering the shape of our coastlines and increasing the risks of many types of extreme weather.”

I've been thinking about replacing "An Inconvenient Truth" with another film.  My first choice is "Chasing Ice."  I might use one of the episodes of this show instead.

On that note, Happy Earth Week and Happy Easter!
Posted by Pinku-Sensei at 5:08 PM