I ended Driving update for December 2013: My car by postponing making good on a promise.


Also, I made a promise at the end of the last report.


Yes, I bought this car in October 2003.  I have a story about that, but I'll save it for the next report, along with why I named my car Yuki.  Stay tuned.

I'm going to take a rain check on this promise.  These look like the kind of stories I would write to post while I'm traveling, which I might do over the next two weeks.

Instead, I explained the name of my wife's car.


It's late and I'm tired, so I'm not up to it.  Besides, this report is about my wife's car, which I call Ruby (my wife doesn't give her cars names).  I gave her that name because of the car's color and because my wife and I are fans of "Once Upon a Time," which had a character named Ruby, who is really Red Riding Hood, for the first two seasons.

My previous car, a Nissan I called Molly, died in October 2003 after she turned over 210,000 miles during a drive back from an anime convention in South Bend, Indiana, although I didn't realize it at the time.  I heard the engine knocking, which it did when the oil was low.  I put in two quarts of oil (!) and continued driving home.  Within a week, I had to put in more oil, and the engine began to sound just horrible.  I took it in for service, and found out that all the seals had blown and the engine was getting ready to throw a rod.  That was the end of my driving Molly.  I had to get a new car.

About this time, one of the local Kia dealerships was advertising its deal.  "Got a job?  Got $100?  Get a new Kia!"  I qualified, so I rented a car and drove over to the nearest Kia dealer and got Yuki.  It wasn't even the right dealership, but that didn't matter.  I picked out a car from the previous model year that had a rebate to entice people to get it off the lot.  I was able to roll that rebate into the down payment and was able to drive Yuki home without paying a cent.  Ah, the long-gone days of easy credit!

As for Molly, the dealership accepted her as a trade-in worth $50 and had her towed away.  At least I was able to get scrap value and free towing.   Best of all, Yuki's interior looked exactly like Molly's.  From the inside, it was as if I had just gotten a newer version of the same car with an automatic transmission.  As I wrote back in 2011 and again in 2012, it was a concession to comfort and age.


When I needed to buy a car, I got a Kia instead. It got 32 miles to the gallon, but it was an automatic. I was willing to sacrifice a few miles to the gallon so that my left foot and right hand could rest. Yeah, I'm a sucker for convenience, too.

At least it wasn't the Aztek my son wanted me to buy.  That would have been an environmental and economic disaster.

As for the name, my younger daughter suggested Yuki after Yuki Saiko, a character in the manga and anime "Silent Mobius."  The character's image is the one I used at the head of this entry.  It's the same one my younger daughter downloaded as a wallpaper on the computer I owned at the time.  Why Yuki?  In addition to "Silent Mobius" being a mutual favorite of ours, my daughter picked her out as the kind of woman she'd want for me; she was sweet, pretty and owned a coffee shop.*  Yes, I love my coffee.  Besides, the artist who drew the manga was named Kia Asamiya.  My daughter wanted to name a creation of one Kia after the creation of another Kia.  It stuck and that's how a Korean car got a Japanese name.

Follow over the jump for the statistics, footnotes, and a music video.

The last time Yuki's odometer turned over 1000 miles, it was December 19, 2013.** That means it took me 114 days to reach this milestone, 34 more days than last time.  That extra month meant my rate of driving decreased to 8.77 miles/day and 267.54 miles/month, down 3.73 miles/day and 113.71 miles/month, obliterating the increases of 0.5 miles/day and 18.15 miles/month between October and December.  What did that?  I was off from school for three weeks, I drove Ruby more, including a weekend when Yuki was in the shop because her wiper blades broke from the snow (what a winter!), and the weather improved enough that I could walk more.  Just the same, Ruby's statistics should be interesting to see when she turns over the next 1000 miles.  Even more interesting will be the total of both cars, as that's the stat that's really important.

Over at Calculated Risk, it shows that total miles driven in the U.S. went down in January as I was driving less, decreasing 1.3% over January 2013. 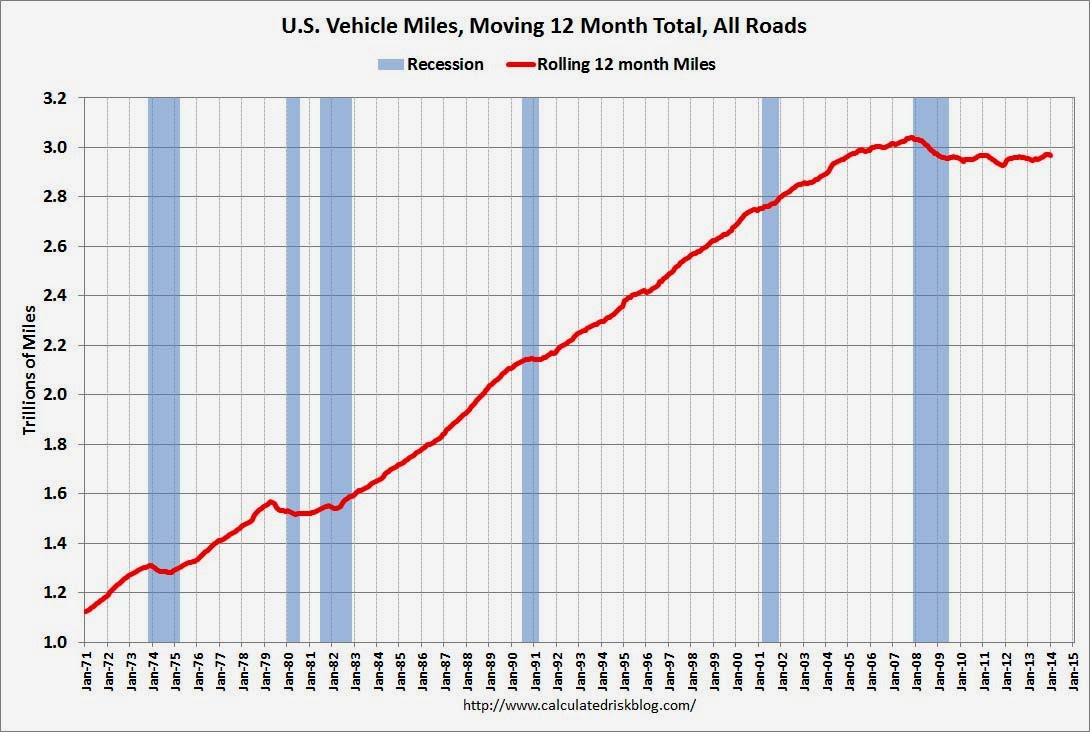 Now to celebrate my finally following through on something I've been teasing since March 11, 2010, when I was still posting these updates on my LiveJournal, I present the opening to Silent Mobius.  Yuki Saiko appears at 0:54.


*Yuki wasn't my favorite character from the anime.  That was Lebia Maverick.  Even so, people who know the series would understand why a real person like her would have been a bad match.

**That was the day the renewal of my car registration was due.  It was also my ex-wife's 65th birthday.  That's as much as I'd like to think about her, thank you very much.
Posted by Pinku-Sensei at 12:00 AM