A review of entries about 'An Inconvenient Truth' 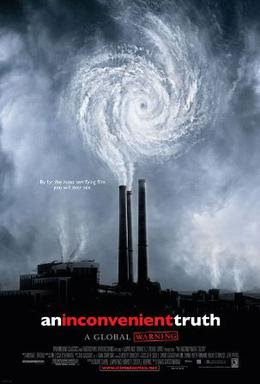 I'm in between showings of "An Inconvenient Truth" this week, the worksheets for which I included in Showing "An Inconvenient Truth" to my students again a year ago, the feature entry in Student worksheets for the second and third year of Crazy Eddie's Motie News.  That may be the most popular entry about the film on my blog, but it's not the only one.  In fact, the day before I posted I'm hosting an Earth Week event today which previewed the movie.

In August, I posted two entries about the film either the week I showed it or the week before.  The first was Hot (not): a cold blast from the past, which explored the causes of the thousand-year reversal of the end of the last glaciation.  That plays a major role in the movie, with Gore favoring the flooding of the North Atlantic with glacial meltwater, while the latest hypothesis positing a comet impact on the ice sheet.  The two are not mutually exclusive, as the impact could have released the meltwater, but they are competing explanations for the event.  The second was Hot: Three topics from 'An Inconvenient Truth' in the news.  The three topics addressed these three questions.

In December, I posted Climate news while I'm showing 'An Inconvenient Truth'.  It was just a compendium of climate stories, but it contained the answer to "What evidence first convinced Al Gore about the connection between carbon dioxide and global warming?"  The answer was the carbon dioxide data collected by Roger Revelle.  At least one person searched for this answer in December.  Should anyone else search again, they can now find it.  That entry prompted My sister suggesting I show 'A Convenient Truth' to my students.  I liked that suggestion.

That's not a bad idea.  "End of Suburbia" is a downer and getting dated.  I might just replace it with something optimistic about a greener future for cities.  After all, I am a Crazy Eddie.

As you can see, these entries come in pairs.  While I'm waiting for a response from a reader or for something else to inspire me to post a follow up, I present the Oscar winner for Best Original Song from the movie, Melissa Etheridge - I Need To Wake Up.