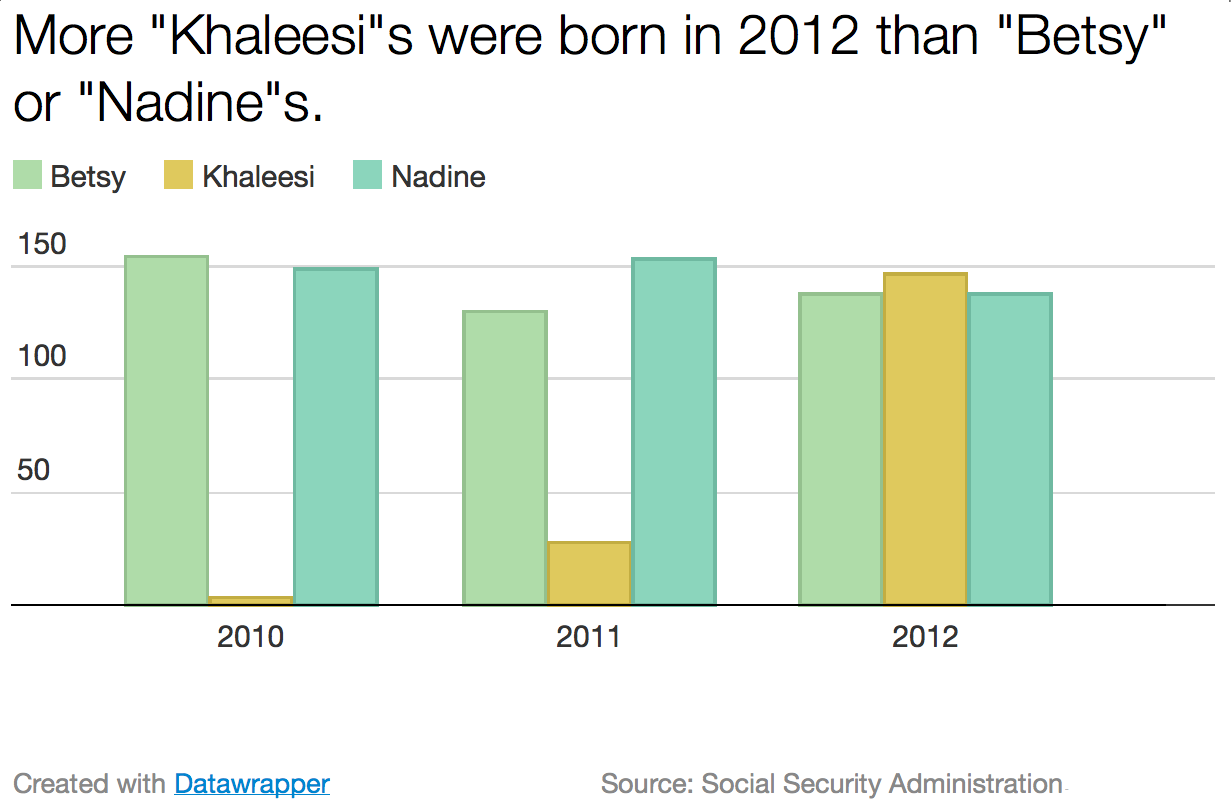 For my Sunday night entertainment entry, I'm going to be a good environmentalist and recycle material I posted at Journalfen.  First, More babies named Khaleesi than Betsy.

According to data from the Social Security Administration, were 21 newborns in 2012 named "Daenerys," which was never used enough in previous years to show up in official counts (for privacy reasons, the SSA only releases numbers for names used five or more times in a given year).

But wee baby Daeneryses were dramatically outnumbered by newborns named "Khaleesi" — the title Targaryen earned when she married Dothraki leader (or "Khal") Drogo. 146 "Khaleesi"s were born in 2012, making it more popular as a full name than "Betsy" or "Nadine"...

The article also has stats on the popularity of Arya, Draco, Hermione, Sirius, and Katniss.  Katnisses are now more common than Maudes among those born in 2012.

Follow over the jump for something darker and much more collapse-and-decline-related.

Next, Professor suspended over daughter's Game of Throne T-shirt, originally posted to unfunny_fandom.

Francis Schmidt is a popular professor of design and animation at Bergen.  Schmidt  posted to Google+ a cute picture of his young daughter wearing a Game of  Thrones t-shirt in a yoga pose next to a cat.  The t-shirt was this one, bearing the phrase "I will take what is mine with fire and blood,"  a quote from Daenerys Targaryen, a fictional character in a series of  fantasy novels (which has sold tens of millions of copies) turned into a  hot TV series on HBO (with close to 15 million viewers per episode.)   Googling the phrase will instantly provide a context to anyone  unfamiliar with the series.

So:  a professor posts a cute picture of his kid in a t-shirt with a  saying from a much-talked-about tv show.  In the America we'd like to  believe in, nothing happens.  But in the America we've allowed to creep  up on us, this happens:


But one contact — a dean — who was notified automatically via Google that the picture had been posted apparently took it as a  threat. In an email, Jim Miller, the college’s executive director for human resources, told Schmidt to meet with him and two other administrators immediately in light of the “threatening email.”

Although it was winter break, Schmidt said he met with the  administrators, including a security official, in one of their offices  and was questioned repeatedly about the picture’s meaning and the  popularity of “Game of Thrones.”

Schmidt said Miller asked him to use Google to verify the phrase,  which he did, showing approximately 4 million hits. The professor said  he asked why the photo had set off such a reaction, and that the  security official said that “fire” could be a kind of proxy for  “AK-47s.”

Despite Schmidt’s explanation, he was notified via email later in the  week that he was being placed on leave without pay, effectively  immediately, and that he would have to be cleared by a psychiatrist  before he returned to campus. Schmidt said he was diagnosed with  depression in 2007 but was easily cleared for this review, although even  the brief time away from campus set back his students, especially those  on independent study.

Pressed for an explanation of this lunacy, Bergen Community College Kaye Walter retreated into the first refuge of a modern authoritarianism, "think of the children":

Walter said she did not believe that the college had  acted unfairly, especially considering that there were three school  shootings nationwide in January, prior to Schmidt’s post. The suspects  in all three shootings were minors targeting their local schools  (although three additional shootings at colleges or universities  happened later in the month)

More at the link, including Bergen Community College doubling down.

Am I ever glad I don't teach at Bergen Community College!