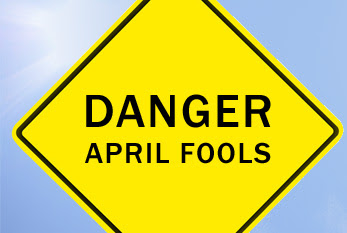 I started today with A prank for April Fools Day in which January Jones told Jimmy Fallon of the Tonight Show about a prank she pulled a few days ago.  That wasn't really an April Fools joke, as it was early, but it made for a good placeholder until the real ones for today rolled in.  They have, beginning with CNN's Best and worst April Fool's jokes.

I  used both the corporate PR and humor labels for Daily Kos on 'Cosmos' and manufactured ignorance, but that was humor about corporate PR that wasn't itself funny.  I've never used it when the corporate PR was intentionally funny--until now.  Happy April Fools Day!

Follow over the jump for more geeky humor for the day.

On April 1st the Internet becomes useless and full of jokes. Here are the best and worst of April Fools 2014.

Even the lame ones were worth laughing at, and they were all corporate PR as well.

Finally, some advice from the Wall Street Journal on How to Pull Off the April Fools' Day Office Prank.

Could a harmless April Fools' Day joke harm your business or career? Not everyone has a sense of humor. Susan Solovic joins Lunch Break with tips on for keeping your office prank fun and safe.

Remember these recommendations for next year.  This year's April Fools Day is over here.
Posted by Pinku-Sensei at 12:00 AM