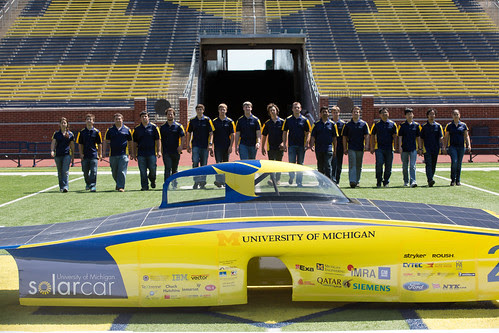 During the past month, I've featured science, space, health, environment, and technology stories from Michigan's universities on Overnight News Digest on Daily Kos as part of an ongoing project to "highlight the research stories from the public universities in each of the states having primary or special elections for federal or state office this year."  Now that Michigan's primary is over, I'm moving on.  In the meantime, I've collected some fun, interesting, hopeful, and even distressing energy news from the University of Michigan and Michigan State.  I'll start with a fun one.

ANN ARBOR—After a series of setbacks including a motor problem that sidelined their vehicle in the first 10 minutes of an eight-day race, the University of Michigan's national champion Solar Car Team has won the American Solar Challenge, according to this afternoon's unofficial results.

The team crossed the finish line in Minneapolis at 1:50 p.m. ET today, earning its fifth consecutive first place in the 1,700-mile contest. The race, which happens every other year on a different course, began in Austin, Texas, on July 20. Michigan raced against 22 other teams of college students that had built their own solar-powered electric vehicles.

That's good news.  Here's something distressing that the University of Michigan discovered: When it comes to energy's environmental impact, Southerners think differently.

ANN ARBOR—Southerners are less likely than Americans in other parts of the country to believe that energy affects the environment by at least a fair amount, according to the latest findings of the University of Michigan Energy Survey.

A joint effort of the U-M Energy Institute and Institute for Social Research, the quarterly survey gauges consumer perceptions and beliefs about key energy-related concerns including affordability, reliability and impact on the environment.

Somehow, I'm not surprised.  I can't even say I'm disappointed, as that would require me to say that the finding didn't conform to expectations.

Follow over the jump for more news, all of which can be considered good.

ANN ARBOR—Fuel economy of new vehicles sold in the U.S. during July fell just shy of the all-time high, say researchers at the University of Michigan Transportation Research Institute.

Average fuel economy (window-sticker values) of cars, light trucks, vans and SUVs purchased last month was 25.6 mpg, just off the record-high of 25.7 mpg in May, but up from 25.5 mpg in June. Vehicle fuel economy is now up 5.5 mpg from October 2007, the first month of monitoring by UMTRI researchers Michael Sivak and Brandon Schoettle.

University of Michigan: Toward ultimate light efficiency on the cheap
July 15, 2014

ANN ARBOR-Researchers at the University of Michigan have taken a major stride toward perfectly efficient lighting that is also relatively inexpensive and simple to make. The same material can also reveal the presence of water by changing color.

LEDs are semiconductors that produce light when an electric current runs through them. Carbon-based, or organic, semiconductors are much cheaper than inorganic semiconductors, but today's organic technologies rely on metals in the semiconductor to enable phosphorescence. This raises the price and sometimes makes the material toxic. Now, the team of Jinsang Kim, a professor of materials science and engineering, developed bright, metal-free, organic, phosphorescent light emitters.

Michigan State University has been awarded $1 million from a joint U.S. Department of Energy and U.S. Department of Agriculture program to develop hardier switchgrass, a plant native to North America that holds high potential as a biofuel source.

If switchgrass could better endure northern United States’ winters, the plant could be an even better source for clean energy. To that end, Robin Buell, MSU plant biologist, will work to identify the genetic factors that regulate cold hardiness in switchgrass.

“This project will explore the genetic basis for cold tolerance that will permit the breeding of improved switchgrass cultivars that can yield higher biomass in northern climates,” said Buell, also an MSU AgBioResearch scientist. “It’s part of an ongoing collaboration with scientists in the USDA Agricultural Research Service to explore diversity in native switchgrass as a way to improve its yield and quality as a biofuel feedstock.”

That's it for this round.  I'm sure I'll return to Michigan for more stories during the general election, as the state has competitive elections for both Governor and U.S. Senator, the criteria I will use to select states to cover.