'No Impact Man': Student sustainability video festival 22 and a conversation with The Archdruid 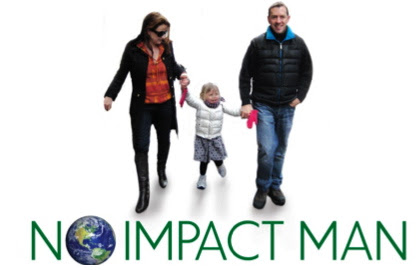 I gave my first final exam of the semester, which means that it's time to resume my ongoing series of videos from students that I left off at Student sustainability video festival 21: Extreme weather.  For a change of pace, instead of including videos that my students used in their presentations, I'm posting trailers and reviews of two movies that a couple of my students watched and summarized for extra credit, "No Impact Man" today and "Tapped" tomorrow.

Author Colin Beavan, in research for his new book, began the No Impact Project in November 2006. A newly self-proclaimed environmentalist who could no longer avoid pointing the finger at himself, Colin leaves behind his liberal complacency for a vow to make as little environmental impact as possible for one year. No more automated transportation, no more electricity, no more non-local food, no more material consumption no problem. That is, until his espresso-guzzling, retail-worshipping wife Michelle and their two year-old daughter are dragged into the fray. Laura Gabbert and Justin Scheins film provides a front row seat into the familial strains and strengthened bonds that result from Colins and Michelles struggle with this radical lifestyle change.

Next, a promotional segment on CBS News: The "No Impact Man."

Author Colin Beavan spoke to Harry Smith about his new documentary and book "No-Impact Man" based on a one year experiment to live life with his family with as little environmental impact as possible.

I'm impressed.  I now have a good example to follow, a film to recommend to my students, and an answer to Greer the Archdruid, who wrote in Dark Age America: Climate, "Until the people who claim to be concerned about climate change start showing a willingness to burn much less carbon, it’s unlikely that anyone else will do so..."  Follow over the jump for my response and Greer's reply.

Me: Earlier this month, I attended Netroots Nation, the national progressive conference, here in Detroit. Environmental activists were out in force. One session consisted of a showing of films about climate and other environmental causes, the trailers of which I have embedded at the link.

There was also a meeting of the Environmental Caucus, which was entirely focused on combatting climate change and reducing greenhouse gas emissions. I was in the room with activists from Greenpeace, Rainforest Action Network, the Sierra Club, and other big environmental organizations. We brainstormed ways to convince people to reduce their carbon footprints, most of which involved persuasion or lobbying. My suggestion was to ally with any advocates of mass transit, which would reduce the greenhouse gas emissions and energy use of all the riders. None of the people there thought of advocating for improving inter-city passenger rail. Too bad, as it would have been more energy-efficient than flying from Washington D.C. or NYC and a good example to boot.

Near the end of the session, one of attendees and organizers reminded everyone that the goal was to get people in the U.S. to consume less, then pointed out that we were going to consume less in the future whether we liked it or not. Everyone else sat still as they silently contemplated the elephant in the room, which had just been pointed out to them.

Greer: Pinku-Sensei, it's a pity nobody said, "I know what we can do! Let's all help people burn less carbon by showing them how it's done, by using much less carbon directly and indirectly in our own lives!" Based on my experience, you'd have seen a world-class example of foot-scuffing and looking uncomfortable, until somebody said, "Er, well, then. Does anyone have any other suggestions?"

I got too busy to follow up, but that would actually have been considered off-topic.  The session was about political strategies, not personal ones.  Actually, I'm sure that that many of the people are doing what they can to reduce their impact, even if it's not up to the standards of either Greer or Beavan.  Besides, this was at the very end of the meeting, so there would have been not time for someone to ask for other ideas.

As for me, I put my money where mouth was, as I promised to vote yes on the SMART millage, urged a Yes vote for SMART, endorsed a Yes vote, then voted yes.  The millage passed in all three counties.

That's it for "No Impact Man."  Stay tuned for an entry about "Tapped" tomorrow.