This was my drive home tonight 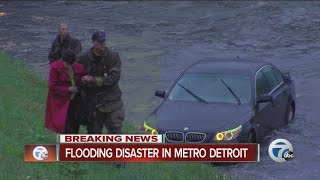 Seriously, just watch the videos, beginning with WXYZ's raw footage of Flooding on the streets of Royal Oak.


Yes, it was that bad.  I saw at least ten cars that had stalled out on the way home.  I haven't seen that many cars stranded by weather since I lived out in Whitmore Lake more than four years ago and saw that many cars that had spun out because of ice on the road.  That was on a a thirty-mile drive, not on what was supposed to be a seven-mile drive that normally takes 20 minutes, but ended up being a 16 mile drive that took an hour.

When I tried to find another route home, this is what I saw: Woman tells drivers to turn around in flooded neighborhood.


Street after street was closed off, so I had few options to get home.  I eventually made it by driving several miles out of my way to the next town to the north to bypass the low spots under the railway bridges and find an area that didn't have water over the curbs.

At least all this rain came in handy at work as a teachable moment.  I talked about climate change in both my lectures today, and pointed out how it's expressing itself as increased precipitation, including 2013 being the wettest year in Michigan history, 2013-2014 being the snowiest year in Detroit's history, and 2011 being the rainiest year in Ann Arbor, Detroit, and Toledo.  With a steady downpour all day long outside the windows, the students got the point.

Now excuse me while I vacuum up some more water from my basement.
Posted by Pinku-Sensei at 1:16 AM