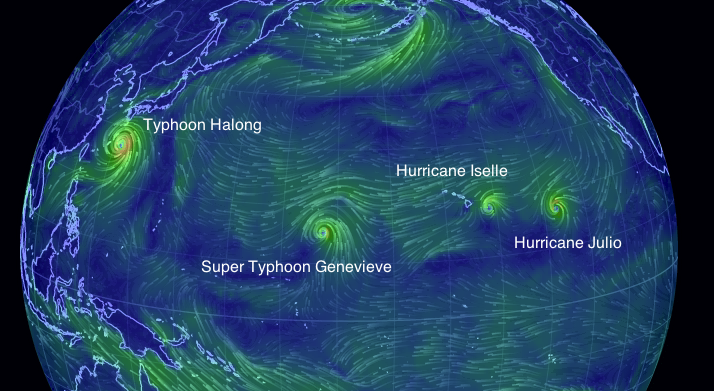 Today is a primary election day in Hawaii, so it's one of the states I'm covering in tonight's Overnight News Digest: Science Saturday on Daily Kos.  At the same time, the big island of Hawaii has suffered its first landfall of a named storm since statehood.  That's enough to make the event tonight's top story both here and at Daily Kos.  I'm giving my readers a special sneak preview of the stories from commercial sources, beginning with this video from KHON: State to release primary results ahead of 2 polling places.

The primary election will go on as scheduled Saturday, except for two polling places on the Big Island where Iselle caused enough damage to postpone voting for thousands of people.

Amid cleanup from Tropical Storm Iselle and more wind and rain expected from Hurricane Julio on Sunday, Hawaiian election officials scrambled Saturday morning for the state’s primary election to go forth as planned.

All but two polling stations in the state will open as planned.

The two closed stations are in precincts where "there are miles of roads that are obstructed" and power outages, Atty. Gen. David Louie told reporters Friday. The roughly 8,000 affected voters will be able to cast absentee ballots later.
...
Hurricane Julio, which was downgraded to a Category 2 storm on Friday, is expected to veer north of Hawaii on Sunday, bringing rain and winds to the Big Island, according to the National Weather Service. As of early Saturday morning Julio had sustained maximum winds of 100 mph. It is 495 miles east of Hilo, moving at 16 mph.

Follow over the jump for more from KHON and Vox.

KHON2's Justin Cruz says Julio's track remains to the north of the state.

Next, Vox explains the significance of the number of storms in the North Pacific.

There are 4 hurricane-strength storms in the Pacific right now
by Brad Plumer
August 7, 2014

One reason for the current flurry of storms? The waters in the Pacific are particularly warm right now, with sea surface temperatures in the North Pacific about 1°C warmer than average. That helps fuel stronger storms.

Yes, there is a climate change angle to this story.  Did you expect any different?