War, Death, and Destruction from Reuters for August 25, 2014 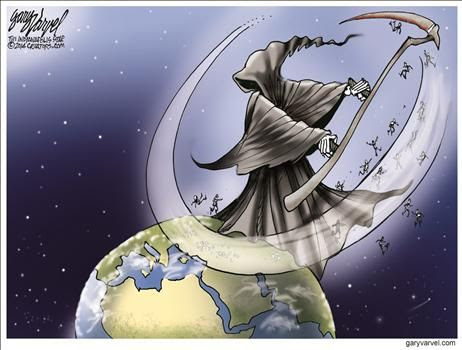 I titled last night's news summary on Daily Kos Overnight News Digest: Death, Disaster, Good news for business, and the Emmys.  I already passed along the Emmy Awards update from Reuters and even that couldn't escape the specter of Death with the Robin Williams tribute, so it's time for the death and destruction.

First, stories about three of the four topics that Kunstler wrote about in this week's missive of DOOM, Chill Winds, Ukraine, ISIS, and Israel-Gaza.

(Reuters) - Divided by mistrust and mutual recriminations, the Russian and Ukrainian leaders will hold rare talks on Tuesday that offer only a slim hope of progress towards ending five months of separatist war in Ukraine.

Since Vladimir Putin and Petro Poroshenko last met on June 6 in France, Ukraine has turned the tide of the conflict and largely encircled pro-Russian rebels holding out in two cities in the east of the former Soviet republic.

But the diplomatic crisis has only deepened, especially since the downing of a Malaysian airliner over rebel-held territory last month with the loss of 298 lives.

This was the most read story on Reuters last night.  My Ukrainian and Russian readers can make of it what they will.  And, yes, I have lots of readers from both countries.  Ukraine and Russia are top two non-U.S. sources of readers for the blog this month, and Russia is the largest foreign portion of the audience in the history of the blog; Ukraine is in eighth, and will pass France for seventh at current rates in a few months.

Follow over the jump for the stories about war, death, and destruction from Iraq, Gaza, Congo, and elsewhere that made headlines last night.

(Reuters) - The United Nations on Monday condemned "appalling, widespread" crimes by Islamic State forces in Iraq, including mass executions of prisoners that could amount to war crimes.

U.N. human rights chief Navi Pillay condemned "grave, horrific human rights violations" being committed by Islamic State, a Sunni Muslim group which has seized large areas of Iraq and Syria to the alarm of the Baghdad government and its allies in the West.

Up to 670 prisoners from Badush prison in the city of Mosul were killed by Islamic State on June 10, Pillay said in a statement quoting survivors and witnesses to the "massacre" as telling U.N. human rights investigators.

I have more on ISIS and their penchant for creating cultural and scientific crime scenes in the archives.  I'll try to remember to share those stories this week.

Israel had no immediate comment on the attacks that took place as Egyptian mediators stepped up efforts to achieve an elusive ceasefire to end seven weeks of fighting.

Palestinian health officials say 2,125 people, most of them civilians, including more than 490 children, have been killed in Gaza since July 8, when Israel launched an offensive with the declared aim of ending rocket fire into its territory.

Readers of this blog may have noticed that I've been silent about Israel and Palestine.  One of these days I might break that silence.  Today is not one of those days.

(Reuters) - Family and supporters of Michael Brown on Monday celebrated the life of the black teenager slain by a white officer in Ferguson, Missouri, in a music-filled funeral service ringing with calls for peace and police reforms.

Brown's body lay in a black and gold casket at the Friendly Temple Missionary Baptist Church, topped with the St. Louis Cardinals baseball cap he was wearing when he was killed on Aug. 9.

People jammed inside the modern red-brick church and gathered outside on Dr. Martin Luther King Drive in St. Louis for the celebration, a markedly different scene from the violent protests that rocked the St. Louis suburb of Ferguson after the police shooting of the unarmed 18-year-old Brown.

Kunstler was not the only Peak Oil blogger to discuss the topic.  Greer did as well in Heading Toward The Sidewalk.  My thinking is much more in line with Greer than with Kunstler on this topic, as one might be able to tell with my first comment on the situation in The science of tear gas from Discovery News.  That's another topic I'll explore later.

In my comment to Kunstler's blog, I didn't mention any of the above topics.  Instead, I made a comment on Ebola, the Red Death.  That was the subject of the fifth most read article on Reuters last night.

(Reuters) - Democratic Republic of Congo declared an Ebola outbreak in its northern Equateur province on Sunday after two out of eight cases tested came back positive for the deadly virus, Health Minister Felix Kabange Numbi said.

A mysterious disease has killed dozens of people in Equateur in recent weeks but the World Health Organization had said on Thursday it was not Ebola.

"I declare an Ebola epidemic in the region of Djera, in the territory of Boende in the province of Equateur," Kabange Numbi told a news conference.

Stay tuned for more on this continuing story.

The second most read article last night on Reuters was about destruction that had nothing to do with war or disease, the recent earthquake in northern California.

(Reuters) - A strong earthquake that jolted residents of California's Napa Valley wine country from their beds on Sunday caused insured property damage likely in the hundreds of millions of dollars, but the region's total economic losses will be several times that, experts said on Monday.

The magnitude 6.0 quake, the biggest to hit California's Bay Area in 25 years, struck before dawn on Sunday near Napa, injuring more than 200 people and damaging dozens of buildings in the picturesque community northeast of San Francisco.

At least 49 buildings in Napa, a town of 77,000 residents, were "red-tagged" as unsafe to enter, including the Napa Senior Center and the local courthouse, and that figure was expected to rise as additional structures were inspected, officials said.

Fortunately, there were no deaths.   Speaking of death, I have one more obituary from last night's news.

(Reuters) - British Prime Minister David Cameron led tributes on Monday for actor and director Richard Attenborough who died just days before his 91st birthday after a career in the film industry spanning over six decades.

Tributes poured in from the worlds of entertainment, sports and politics for Attenborough, who died on Sunday, praising his film work, his charm, and his commitment to do good through various humanitarian causes.

One of Attenborough's greatest achievements was overcoming 20 years of resistance from Hollywood studios to finally make a cinematic tribute to Mahatma Gandhi in 1982 with the $22 million epic "Gandhi" winning eight Academy Awards including best film and a best director Oscar for Attenborough.

I never knew Richard, but I had the great honor of meeting his younger brother David.  My condolences to Sir David on his brother's passing.