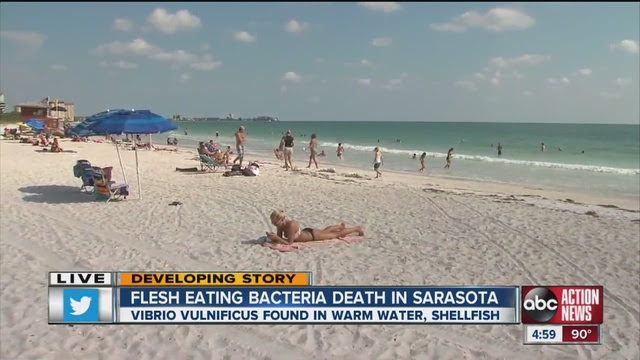 Ebola and plague weren't the only disease stories in the news on Daily Kos last week.  Flesh-eating Vibrio bacteria in Florida were as well.  Discovery News and the University of Georgia have the story.

A flesh eating bacteria has been claiming lives near a Florida beach! What are the symptoms, and is this a serious issue? Dr. Carin Bonder joins DNews to discuss this rare bacteria.


Athens, Ga. - Warnings have been issued for beach-goers surrounding a flesh-eating bacteria thriving in the warm ocean waters. Vibrio vulnificus grows in warm water and if swallowed can cause stomachache, vomiting and diarrhea, according to the U.S. Centers for Disease Control and Prevention. If it enters an open wound, "skin breakdown and ulceration" can also occur, the CDC said. University of Georgia experts are available to offer commentary on flesh-eating bacteria.

"People worry about getting eaten by a shark, but the risk from a Vibrio infection may actually be greater, especially during the summer," said James Hollibaugh, Distinguished Research Professor of marine sciences at the University of Georgia. "What's different is that you can't see the bacteria. But they are there."

Vibrio grow best when water temperatures are 20 to 30 degrees Celsius, or 68 to 86 degrees Fahrenheit. According to the CDC, 75 percent of infections occur between May and October. Contact with the bacteria can occur through open wounds or when eating raw or undercooked shellfish.

I already tell my students not to eat shellfish during months that lack the letter R in their names because of Red Tide.  Now I'll have to include Vibrio in the story as another reason to avoid oysters during the summer.
Posted by Pinku-Sensei at 9:31 PM