'Pirates of the Caribbean' alignment chart

Welcome to entertainment Sunday.  I might get around to a more thoughtful entry later, but in case I don't, I'm sharing this entry in the spirit of the four Game of Thrones alignment chart entries and D&D alignment charts for 'The Walking Dead' by sharing something I should have posted on a Talk Like A Pirate Day entry already, a "Pirates of the Caribbean" alignment chart. 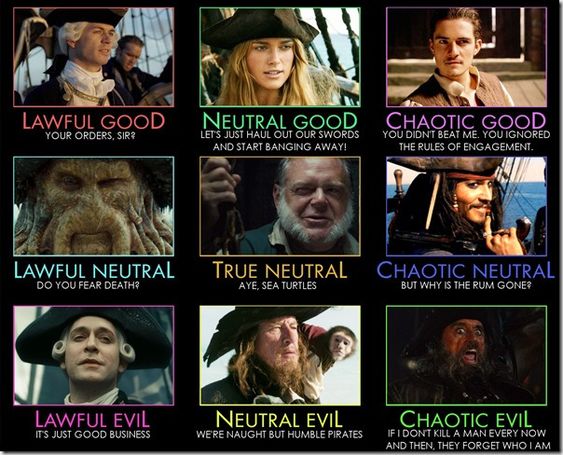 It took all four movies, but the result was something I agree with.  Here's to hoping that the fifth movie lives up to the first three; the fourth is another matter.

No alignment chart post of mine would be complete without the appropriate music, so here's He's a Pirate (Disney's Pirates of the Caribbean Theme) Violin Cover - Taylor Davis.

In case my readers are worrying that I've already used up my material for Talk Like A Pirate Day, don't worry.  I already have something else planned.  If that doesn't work out, I have backup plans.  Besides, I'm an environmentalist; I can always recycle.
Posted by Pinku-Sensei at 12:39 AM