Trump gets a Michigan welcome, good and bad 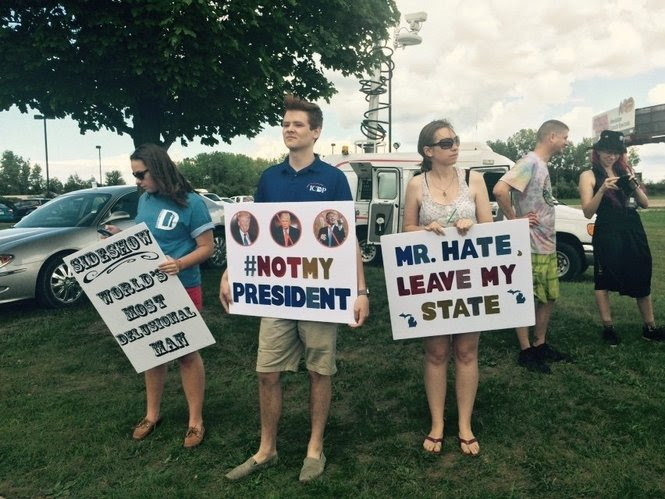 I told my readers to "stay tuned for more on Donald Trump visiting Michigan."  To follow through, I present Donald Trump speaks at Birch Run event.

Donald Trump was in Michigan for a campaign event in Birch Run.

Looks like the event was a success, at least as far as Trump, the Michigan GOP, and Trump himself are concerned.  Just the same, not everyone was thrilled.  Follow over the jump for two reports showing people objecting to Trump's visit.

I was looking forward to seeing if the protesters at Trump's speech were covered.  They were.  MLive reported that Nearly 150 Trump protesters greet attendees at the Birch Run Expo Center.

Echoes of chants like "Dump Trump" and "Leave our state, Mr. Hate" can be heard along Beyer Street leading to the entrance of the Birch Run Expo Center.

Chanting protesters with colorful signs lined the street leading to the event center at 11600 N. Beyer on Tuesday, Aug. 11, to show their disdain of Donald Trump, the current GOP frontrunner.

"The point is that they're able to sell out an arena and have Trump spew this hate just to raise a few dollars," said Brandon Dillon, chair of the Michigan Democratic Party. "Our party's candidates are about issues, not attacks."

Trump is the keynote speaker at the Lincoln Day event, a fundraiser for the Republican Party in Saginaw and Genesee counties. The Michigan Democratic Party planned the protest because of the "anti-immigrant, anti-veteran statements," according to the Facebook event page.

I told you the Michigan Democratic Party had organized the protest.  I probably would have joined them if it weren't so far away and I didn't already have a prior engagement.  Also, it's better than the "about a dozen" at the Hoekstra/Ryan event I picketed.


That video was well-watched, but got lots of negative comments and downvotes.  It doesn't matter; WXYZ got the viewers it wanted.  I got much the same for my Examiner.com article concern-trolling Trump over Michigan's sore loser law.  It just goes with the territory.