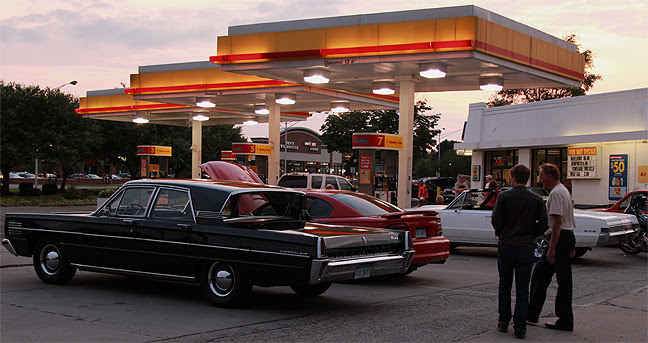 A year ago tomorrow, the subject line read Fear premium stalls out in time for Dream Cruise.  Two weeks ago, the gas price news was Limbo Kitty returns as oil and gas fall more to close July.  This week of this year, the news is exactly the opposite of both headlines, as WXYZ reports in yesterday's Prices jump at the pump.

Drivers are feeling the pinch as gas prices have jumped to almost $3 a gallon.

There's a double irony in the cause of this price spike.  First, crude oil futures have continued to fall. Oil-Price.Net lists yesterday's closings for WTI as $43.30 and Brent as $49.66, only slightly above their lows for the quarter.  Second, the closing of the refinery is one of the factors causing oil prices to drop, as one of the major customers for oil isn't buying.  Reuters reports in Indiana refinery outage escalates fears Cushing will top out.


Concerns among oil traders are escalating that a combination of surprisingly resilient U.S. shale production and lower autumn refinery demand will cause storage tanks in Cushing, Oklahoma, to fill to the brim with surplus crude as early as October.

The biggest U.S. refinery in the Midwest is suffering through an unexpected outage that may take months to resolve. The shutdown may free up enough crude to top off Cushing in just 2 months, a month earlier than the market expected as recently as last week, sparking a sell-off of oil futures spreads.

"Looks like Cushing is going to be full in October now," said one oil trader. "That's very bearish."

The good news for drivers is that gas prices will fall when both the refinery re-opens and summer driving season ends.  That won't be for a few weeks.

In the meantime, metro Detroit motorists will have to contend with the high prices reported by WXYZ.  A colleague told me yesterday that the cheapest station in my old neighborhood had reached a low of $2.41 this week before raising its price.  It's not currently listed on Gas Buddy, but I expect it's selling at about $2.69, a dime below nearby stations and more than a dime below the current Detroit average of $2.86.  That's quite a jump from three days ago, when the average was $2.51. It's times like that I'm glad I drive a Prius.  At least the cruisers can take comfort in gas still being cheaper than it was at this time last year.
Posted by Pinku-Sensei at 10:36 AM