Drinks and drinking games for Donald Trump and the GOP debates

Welcome to more of entertainment Sunday.  For the "more thoughtful entry" I promised in 'Pirates of the Caribbean' alignment chart, I've decided to have some fun with Donald Trump and the rest of the Republican presidential candidates, especially the ones participating in this week's debate.  Trump has so completely blended show business and politics that I may as well treat him as entertainment.  After all, the Huffington Post does.

I begin with the item that inspired me to write this entry, Tipsy Bartender's The Donald Trump Cocktail.

Even Skyy knows that Trump isn't getting the nomination.  He also knows why John McCain's history as a POw matters, but that's a subject for another entry.

In the meantime, I want to point out that there are other drinks with Trump's name attached to them. Tipsy Bartender's wasn't the first!  Follow over the jump for more drink recipes and several drinking games inspired by Trump and the other GOP candidates.

There are actually four or five official Trump drinks named after the man, three Trumptinis, the Trumpolitan, and the Trump Billionaire--yes, that exists.  One of the Trumptinis is still available at the Trump International Sonesta Beach Resort in Miami.  Cocktail Atlas has the recipe.

Mix everything in a cocktail shaker with ice. Serve in a martini glass that has a sugared rim, and decorate with a T-shaped lemon peel.

The irony is that there used to be a Trump Vodka and this drink doesn't use it. 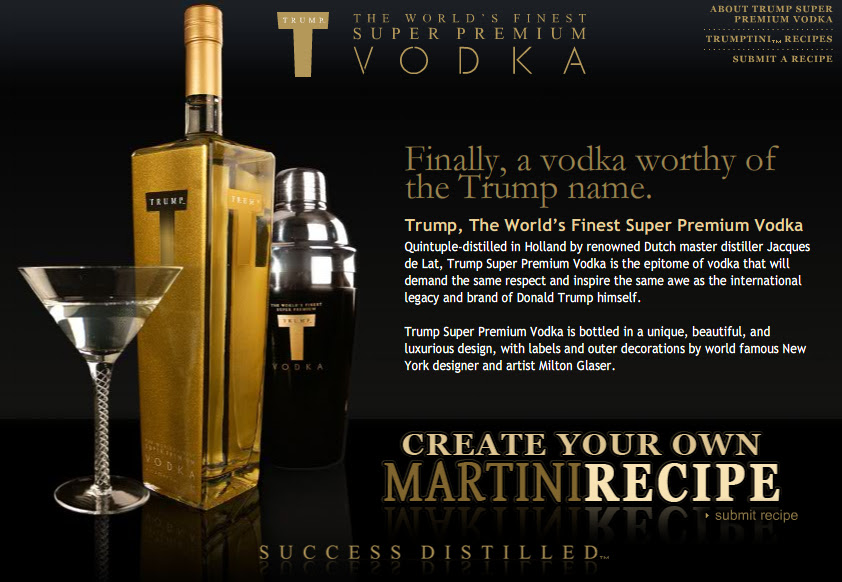 "Success distilled"--yeah, that fits Trump's brand to a T(tm).  Too bad the drink stopped being produced after 2011.  Just the same, it left behind another Trumptini and the Trumpolitan.  One can barely read the recipes in the image below. 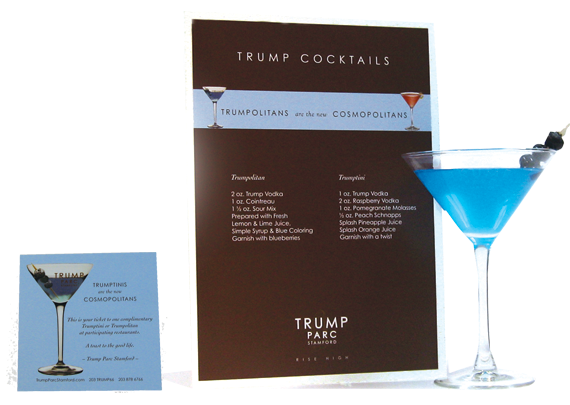 There's even a video of the now-defunct website in action that includes a partial recipe for another Trumptini.


I'm not counting it because it's not complete.  Darn.

Finally, there's the Trump Billionaire for which The Spirit lists the booze ingredients only.

That can't be all of it.  The recipe Saveur has for the Billionaire Cocktail has more ingredients.


Ingredients
2 oz. high-proof bourbon, such as Baker's
1 oz. fresh lemon juice
1/2 oz. simple syrup
1/4 oz. absinthe bitters or absinthe
1/2 oz. grenadine syrup made from pomegranate, such as Employees Only
Lemon wheel, for garnish
Instructions
Combine bourbon, lemon juice, absinthe bitters or absinthe, and grenadine in a shaker over ice. Shake vigorously and strain into a coupe glass. Garnish with the lemon wheel.

I don't know how to reconcile the two, so I'll leave it as an exercise for my readers with more experience in mixology.

Now that I've found four (or five to six if one counts the third Trumptini and the Billionaire Cocktail) recipes for my readers to drink while watching Trump on TV, it's time for some games.  Taste of Truth on YouTube came up with one, the Donald Trump is tremendously annoying- drinking game.

Drinking game: Watch a Trump interview and take a shot every time he says the word "tremendous." Something has been leaving a bad taste in my mouth is the fact that political journalist don't ask Donald Trump about all the people he ripped off by filing bankruptcy. How can he brag about his "tremendous wealth" by taking advantage of bankruptcy laws and never mention all the Americans that never got paid even though they did the work? How does that help the American economy? And why doesn't anybody ever ask those questions? ABC News reports he has filed bankruptcy 4 times. He does not deny this.

There is already a drinking game based on Trump's business bankruptcies.


Let's play a Donald Trump drinking game...Go to the link below about Donald Trump on Wikipedia...hit control F (find) and type in the word 'bankruptcy'....If you do a shot for every instance of it, you will be WASTED.

Fine, we have a drinking game based on "tremendous" and bankruptcy.  There are better ones, including the the Donald Trump Twitter Drinking Game from 2013.

… whenever he quotes himself or his books.

… for every mention of how horrible wind power is. Take an additional shot if it's in context with his golf course in Scotland.

… for every mention of a person and/or media outlet he feels has wronged him. Double the shot for every consecutive tweet about the subject. Triple if, in his opinion, the outlet is dying. Quadruple if Rosie O'Donnell is somehow involved.

… when a tweet about himself includes the hashtag "#midastouch".

… whenever he tweets about how poor the Republicans are at negotiating. Do a second shot when he mentions how they should have taken lessons from him.

… every time both "Celebrity Apprentice" and "record setting" are mentioned in a tweet.

Daniel Wall at Northierthanthou has a more elaborate and timely one in This Can’t be the First Donald Trump Drinking Game, But…


Just watch Trump basking in the reflection of his own media presence and follow these instructions.

If Trump says something completely thoughtless. …okay don’t drink yet. This would have you on the floor in no time.

If someone in the media humors trump by referring to his verbal diarrhea as ‘straight talk,’ take a shot of something really stiff and write down the idiots name. When you wake up tomorrow with a hangover, you’re going to want to remember just who is and who isn’t a journalist.

If Trump doubles down after having been called out for saying something truly idiotic completely asinine, or both. …take a sip. Just take it easy here. You don’t want to be bent over the porcelain throne before the end of the interview.

If Trump says something bad about Mexicans. …just another sip, a small one. You know why.

If Trump says something nice about Mexicans in the hopes we’ll forget the bad stuff he already said about them. …Yeah, it’s time to take a drink. Don’t whine about it though, you knew this was coming.

If Trump tries to pretend his critics are objecting to actual policy recommendations instead of his childish hate-mongering, drink again.

If Trump calls another leader ‘weak’, drink-up and do like three push-ups. That oughtta be enough for the Donald.

If Trump declares himself a winner, do some coke and say a prayer for Charlie Sheen.

If Trump says he’s the best at something, don’t bother drinking cause you know damned well he’s a better drinker than you, so you might as well just give it up right now.

It Trump’s hair does something odd, don’t drink and don’t laugh. Seriously, this whole hair-theme was old a decade or two back. Can we please stop pretending the man’s hair is half the train wreck that we get with every fricking word out of his mouth?

If Trump retweets one of his adoring fans proclaiming him the only possible savior for America and all of western civilization, don’t drink. This too will end the game too quickly. Maybe just fart a little, because it’s kinda fitting, and you know you wanna.

If Trump brags about the number of fans who showed up at an event, ask him to pay you to drink. It’s only fair.

If Trump dismisses the views of someone who understands politics far better than he or any of his advisers ever well, call John Stewart and tell him he has to help us drink our way through the next year and a half.

If Trump threatens to sue someone, don’t drink. Just fill your glass and wait.

If Trump mentions how much money he has, drink something really cheap served in a gaudy container and burn up a ten dollar bill. You’re getting as good a deal as any customer ever got from the Trump label.

If someone else mentions bankruptcy, drink some water. You know you need the break.

If Trump tries to lecture us about how bankruptcy is really just good business, buy a drink for one of the many mere commoners trying to live in the wake of bankruptcy. They need it more than you.

If Trump plays a rock tune completely out of place with his campaign, don’t bother drinking. Politicians always do this. It’s nothing special.

If Trump says anything about Isis, drink or don’t drink, but keep it to yourself. You’re the only one that needs to know.

If Trump complains about violations of his free speech, don’t drink. This is a totally serious thing, and no-one should make light of it, not ever.***

If Trump ever makes a substantive point about anything in the course of this election, then give up drinking entirely. (Don’t worry. This will never happen.)

***Just kidding! It’s time to drink that double you poured earlier. Maybe two or three of them right.

Notice a trend came up with an even more detailed one in It Has To Be Done: GOP Debate Drinking Game 2016 Edition.


There are more for the rest of the candidates.  I'll feature my favorites later in the week.

Speaking of the other candidates, they shouldn't be left out in the drink department.  For ideas of what to drink in their honor, read Hypeline's Presidential candidates as alcoholic drinks, but ignore their suggestions for the Democratic candidates.  After all, they're not the ones debating in Cleveland this week!
Posted by Pinku-Sensei at 8:00 PM