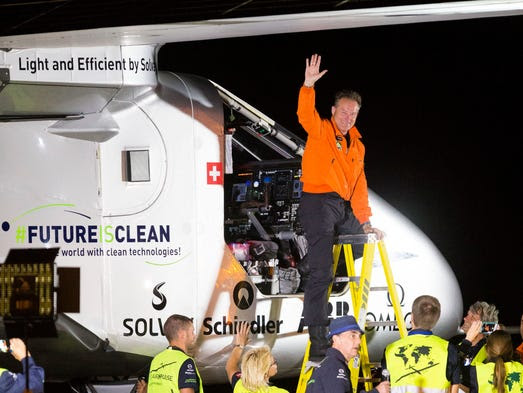 I teased "I might do this again next week for the Indiana primary, in which case I'll feature the Indiana and Purdue University marching bands in addition to the Star United minicorps" at the conclusion of Drum corps for the Pennsylvania and Connecticut primaries.  I'm not feeling it today.*

Instead, I'm following up on Solar Impulse 2 lands in California with the next leg of the trip.  Euronews has the video in Bye bye San Francisco, destination Phoenix for Solar Impulse 2.

The plane Solar Impulse 2 took off from San Francisco early on Monday heading for Phoenix, Arizona - the latest leg of its trip around the world to promote clean energy.

The Arizona Republic has the rest of the story in Solar plane lands in Phoenix area as global trek continues.

Solar Impulse 2, a solar-powered airplane making its way around the world, made its long-awaited stop in the Phoenix area Monday, touching down to cheers and applause, but otherwise nearly silently, at Phoenix Goodyear Airport at 8:55 p.m.

The Swiss-made plane had taken off from Mountain View, Calif., for Arizona shortly after 5 a.m. Monday to continue its global journey using only energy from the sun.

Swiss pilot Andre Borschberg was at the helm of the plane that began circumnavigating the earth more than a year ago.

"It was a beautiful flight from California to Arizona," Borschberg, 63, told a large crowd that had gathered at the airport shortly after disembarking. He hardly looked like someone who had just spent 16 hours by himself in a single-seater plane.

The timing of the flight was fortuitous, coinciding with a debate over the future of solar power in Arizona.

When asked if their timing was meant to coincide with an ongoing debate in Arizona over solar-energy subsidies, Piccard said it was not.

"We did not plan to come during the debate," he said. "But if it helps, we'll be happy."

The Solar Impulse project has always been about delivering a message, Piccard said, more than delivering passengers. The plane is meant to spark a conversation about renewable and efficient energy.

"There are reliable, profitable solutions to have clean energy and to save energy." Piccard said. "When you see an airplane like Solar Impulse, it's not science fiction. It is the present."

That's part of the message in the AFP video about Solar Impulse 2.

Solar Impulse 2, an experimental aircraft flying around the world to draw attention to clean energy technologies, is to take flight again on Monday, organizers said.VIDEOGRAPHIC

As for the plane's next stop, The Daily Mail reported "The solar-powered plane, which stores energy in batteries for when the sun is not shining, will make several stops across the United States, although the team is still examining potential destinations."  In other words, they don't know yet.  Stay tuned.

*I might do it for the Oregon Primary.  At least there is an active competitive drum corps on the field there, the Oregon Crusaders.
Posted by Pinku-Sensei at 11:21 AM