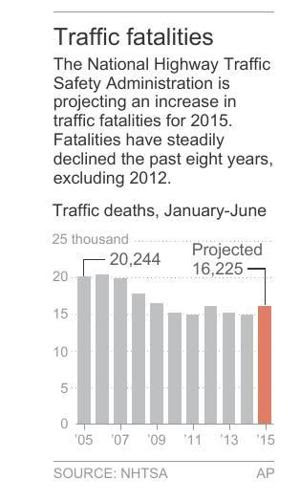 I made a prediction in the driving update for June, one that I repeated in the comments to Doctors to Congress: Fund gun violence research at the CDC and NIH.

The increased miles driven will probably cause more traffic deaths, which will prevent the prediction in The Atlantic that 2015 will be the first year since statistics have been kept that gun deaths will exceed automobile deaths in the U.S.  That's a topic for another entry.

It's time for that entry, as WXYZ reported Monday traffic deaths rose in Michigan last year.

The number of fatalities involving car accidents rose sharply from 2014 to 2015, according to new numbers put out Monday.

Last year, the U.S. had the highest one-year percentage increase in traffic deaths in half a century, according to 2015 data released Wednesday by the National Safety Council (NSC). Initial estimates, which may be revised when more information becomes available, indicate that 38,300 people were killed on U.S. roads in 2015, and roughly 4.4 million sustained injuries that resulted in medical consultations. The number of deaths rose 8 percent from 2014, compared with a less than 0.5 percent increase between 2013 and 2014 and a 3 percent drop the previous year.

“We haven’t seen a jump like this in 50 years,” says Deborah A.P. Hersman, president and CEO of the NSC. “It’s a big change. This is not statistically insignificant. And we’re talking about human lives.”

The NSC identifies an improving economy as a possible cause for the increase, citing factors like lower unemployment and cheaper gas, which usually combine to mean more miles driven. During recession periods, people don’t drive to work as much or take as many vacations, since they have less discretionary income, Hersman says, and fatalities usually fall.
...
Neither the sheer number of miles driven nor a change in population seem to fully explain the jump in 2015. Motor-vehicle mileage increased by 3.5 percent between 2014 and 2015. The annual mileage death rate in 2015 was 1.22 fatalities per 100 million vehicle miles traveled, up 5 percent from the previous year. Meanwhile, the annual population death rate rose by 7 percent to 11.87 deaths per 100,000 people.

The trend seems to be continuing this year, as I passed a traffic condition sign on the freeway yesterday saying that traffic deaths in Michigan are already 30 higher this year than they were this time last year.  I shouldn't be surprised, as April's driving updates show that Americans are still driving more.

As for the gun deaths, I'll have to wait for those to come out to see if the rest of my prediction came to pass.  Stay tuned.
Posted by Pinku-Sensei at 9:01 AM