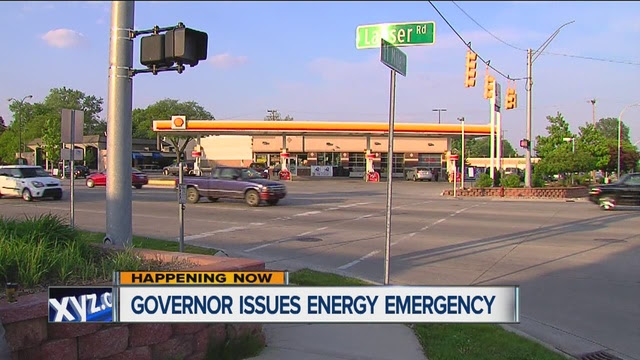 I predicted "that price increases will likely stall out next week, at least until the Memorial Day weekend" in WXYZ on rising gas prices for May.  That didn't happen.  Instead, shows that the Detroit average jumped 12 cents to $2.47 on top of the previous week's 11 cent rise.  That was enough to prompt Governor Rick Snyder to declare an energy emergency, as WOOD-TV reported day before yesterday.

Gov. Rick Snyder issued the order as the state faces a potential gasoline shortage ahead of the long Memorial Day weekend.

I share Patrick DeHaan's skepticism about the effectiveness and timing of the order.  I expect the price increase to moderate before the weekend as well.

WXYZ also covered the issue.  While WOOD-TV focused on expert analysis, WXYZ went with their strength, reactions from people on the street.

People look and sound a little worried, but only a little.  This is more of an inconvenience than an emergency.

As for the situation after the holiday weekend, I expect prices to continue rising.  Oil-Price.Net lists yesterday's closing prices for WTI as $49.56 and Brent as $49.74.  Not only are those both above last Friday's $47.75 and $48.72 for Brent, WTI has set a new high for the year, while Brent is only a few cents below its high for the year, which it set last Wednesday, when WTI hit $48.95 and Brent hit $49.85.  The only good news is that RBOB closed yesterday at $1.64, exactly the same as it was last Friday and still two cents lower than its peak earlier this year at $1.66, a nine-month high.  That's probably why the U.S. average has only moved up a few cents from $2.28 to $2.31 over the past week.  It's also why I expect prices at the pump to decline a bit when the refinery and pipeline issues are fixed before rising again in late June and early July.
Posted by Pinku-Sensei at 9:13 AM